Blackstone Bistro launches a Friday brunch with a varied menu. 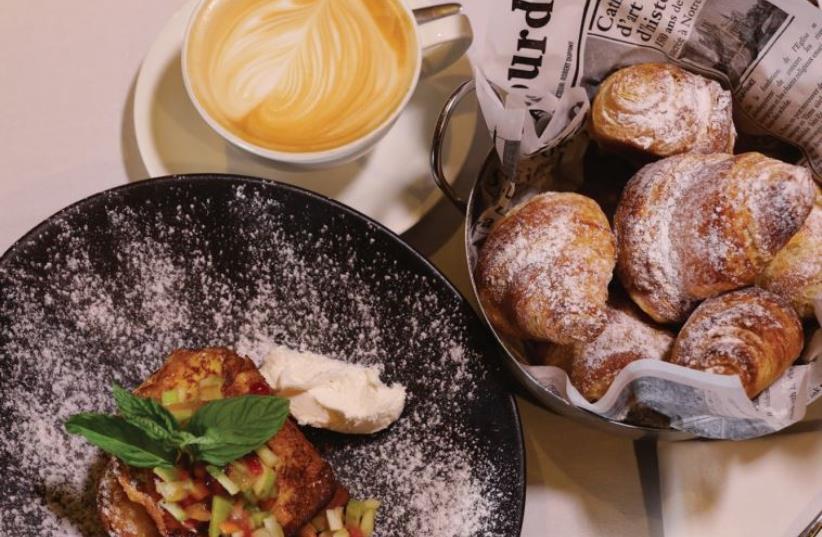 Blackstone Bistro
(photo credit: PR)
Advertisement
One of the most recent entries on Tel Aviv’s Friday brunch scene is actually in Ramat Gan: the Blackstone Bistro and Lounge, the onsite restaurant of the upscale boutique Indigo Hotel in the diamond district. Brunch at the kosher establishment is served between 11 a.m. and 3 p.m., with a menu that encompasses choices suitable for breakfast or lunch.The bistro is operated by the Blackstone Group, which also oversees the successful chain that comprises Meatos and Fish Market.During the rest of the week, the Blackstone Bistro is a meat restaurant, but brunch is definitely a dairy affair.One bonus on Friday is that there is free parking.As befits part two of the bistro and lounge’s name, the space is intimate, with comfortable seating. There is a fully stocked bar, although only five cocktails appear on the brunch menu; each course includes one complimentary cocktail – or cold or hot beverage – from those designated on the menu.Also included free with a meal order is a basket brimming with fresh artisan bread and flaky, buttery croissants, served with soft butter and small jars of Wilkins & Sons jams. The basket of baked goodies can also be ordered a la carte (NIS 28).As we sat down at our table, the menu was brought, along with a carafe of water and slices of lemon, followed by mango mimosas, apparently the most popular of the cocktails. In the Blackstone version, Cava substitutes for champagne. And in spite of the name, the mango was barely detectable in what was otherwise a pretty good mix of orange juice and sparkling white wine.There are two categories of dishes on the menu: Salad and Eggs and More. In that bizarre affectation that so many Israeli restaurants have adopted, all menu headings are in English, whether the individual food or drink items are listed in Hebrew or English.We ordered the herb and nut salad in a Japanese vinaigrette and lime (NIS 48). It was a towering mound of chopped herbs – primarily parsley – studded with peanuts and dried cranberries. It took some digging to get to the part where the dressing was noticeable; it was worth the effort to toss the salad and perhaps even wait a bit for the flavors to meld.The reward was a different and refreshing salad, characterized by the interplay of leafy greens with the salty crunch of peanuts, the sweetness of dried fruit and the tang of the citrusy dressing. Truth be told, I enjoyed this salad most after taking some home and eating it the next day.Our second salad was designated a Caesar salad (NIS 48), comprising “roman” lettuce, endive, liquored pears, pecans and blue Bavaria cheese. Imagine our surprise, therefore, when we discovered beets in the salad instead of pears. The waitress explained that this was a permanent change to the salad that was not yet reflected in the menu.She offered to replace it with a different one, but as we had already ordered our next course, we declined.French toast is a quintessential brunch dish, so we were delighted to see it on the menu, paired with “crème,” fruit marmalade and a cinnamon-anise syrup (NIS 58). We were served three small, thin pieces of French toast, almost completely hidden under a tidy avalanche of fruit salad. The inside of the bread had the consistency of a runny omelette, so I asked if that was intentional. The kitchen explained that this was actually the syrup, but we could have the syrup served on the side instead.We did elect that option, and they quickly brought a new order, the bread fried perfectly and served with a delicious cinnamon-anise syrup that was a welcome change from run-ofthe- mill maple. There was no explanation for the presence of fruit salad and the absence of marmalade, but I guess a side order of fruit salad with crème fraiche could be considered a bonus.There were several pasta entrées, from which we ordered the gnocchi chestnut with mushrooms in a truffle cream (NIS 69). Pretty little pillows of potato pasta and flecks of mushroom were swimming in a very agreeable cream sauce (although it barely hinted of chestnut and bore no detectable trace of truffle).Desserts (NIS 39) were listed with titles only and nary a descriptive word. The chocolate fudge tasted exactly like a flourless chocolate cake, with a thin layer of chocolate sauce standing in as icing.The crème brûlée was actually more than one might expect. Thick disks of cool, creamy pudding were stacked double-decker sandwich-style between wafers, and the entire construction was topped with candied cherries in a heavy syrup.It was a pleasant finale to a meal that had its twists but reflected talent and a willingness to go the extra mile to please.

The writer was a guest of the restaurant.Blackstone Bistro and Lounge
Kosher 5 Aholiav Street, Ramat Gan
Tel: (03) 930-0033
Advertisement
Subscribe for our daily newsletter