The Fresh Kitchen brand launches a bistro line of restaurants 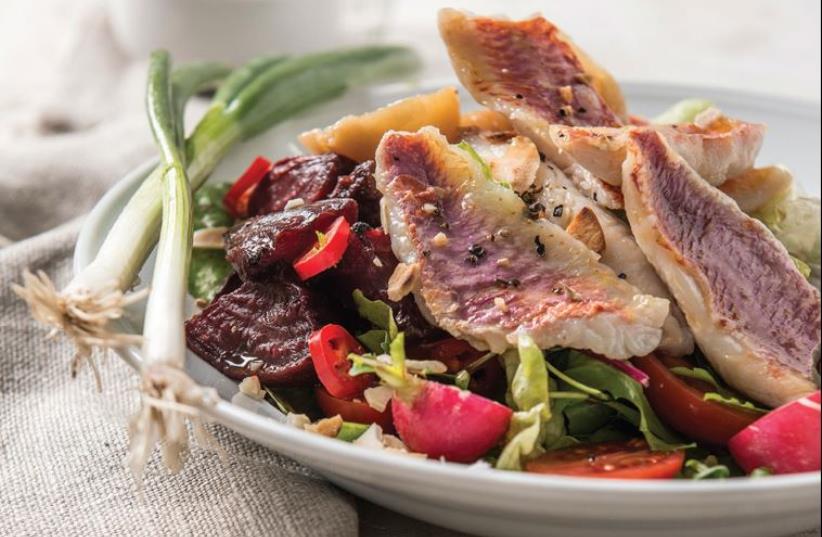 Fresh Kitchen (Bistro)
(photo credit: PR)
Advertisement
The Fresh Kitchen chain has been around for seven years, experiencing steady growth thanks to its proven formula: using quality ingredients to make good food, offered up with nutritional guidance.Recently, Fresh Kitchen has embarked on a venture that expands the scope of some of its eateries in the direction of the neighborhood bistro (although it has yet to formally apply that designation to any of its restaurants). I was invited to experience the Fresh Kitchen “bistro” edition in Ramat Aviv, which opened its doors two and a half months ago.Although the restaurant is still in its infancy, the two al fresco areas – smoking and non-smoking – were full to overflowing midweek. The new restaurant is kosher, under rabbinical supervision.The first sign that this is not your ordinary Fresh Kitchen is the appearance of a specialty cocktail menu (each drink priced at NIS 35). Among the creative choices was a Pomegranate Mojito, combining rum, fresh mint, triple sec, lemon and pomegranate juice – a delicious way to get your antioxidants. The Campari Fresh, meanwhile, adds citrus liqueur, passion fruit sorbet, vermouth and orange juice to the distinctive Italian liqueur. Garnished with a skewer of apple and peach slices, the drink was fruity and refreshing.And that’s not all. By way of introducing and promoting the cocktail menu, a waitress wended her way through the restaurant handing out samples of the frozen passion fruit Margarita. A wine list is also being curated. Also impressive were the attractive and comprehensive menus. Not only was the English version remarkably free of mistakes, but our waitress spoke excellent English. The annotations were thorough and helpful, categorizing each dish in accordance with its nutritional profile: vegan, gluten-free, balanced nutrition, low calorie (defined as up to 500 calories), and even an advisory “suitable for pregnant women and nursing mothers.” Moreover, calorie counts and protein content were provided for all dishes (except desserts).As befits a chain that places an emphasis on healthy eating, there are more salad entrees – warm and cold – than any other category. A basket of bread is complimentary with a salad order: focaccia – resembling a loaf of ciabatta, warm and fresh – plus large slices of multi-grain bread. An assortment of dips and spreads can be ordered for NIS 30. Standouts among them were the homemade apple jam and the bulgur salad. We tried the salad called Quinoa Surprise (NIS 52). The red and white grain, lettuce, cherry tomatoes, red cabbage, carrot sticks, dried cranberries and roasted almonds were lightly dressed with a pomegranate vinaigrette. The cabbage, carrot and almond provided a welcome bit of crunch, while the cranberries added a touch of sweetness.There is always fish on the menu, usually salmon. We had the salmon teriyaki (NIS 79): three skewers arranged on a bed of sweet potato, peppers and eggplant, accompanied by a generous helping of majadara stew. There was a slight fishiness to the salmon, which the sweet teriyaki glaze did a good job of offsetting. The vegetables were cooked just right; the majadara had been prepared without the fried onion customary in many ethnic restaurants. The outstanding dish of the evening came from the page of pasta courses, where one chooses a type of pasta to be paired with the featured sauces. When I chose the chestnut cream, the waitress recommended the tortellini (NIS 58). The delicate cream sauce with chunks of meaty chestnut was subtly flavored, and the mushroom- stuffed tortellini was an ideal match. No Italian restaurant could have done it any better.The dessert menu is as extensive as the salad one, making for extremely difficult choices. Once again, the waitress made an inspired suggestion: the profiterole pie (NIS 48) for two – a bottom crust filled with whipped cream and topped with profiteroles drizzled with white chocolate mousse and milk chocolate. A light, fluffy dish that satisfies the chocoholic as well, it covers all the right bases. Like all Fresh Kitchen outlets, which are part of the Cafe Cafe Group, the bistro edition honors the Mood club loyalty card, which extends a host of benefits to members. The writer was a guest of the restaurant.Fresh Kitchen (Bistro) Kosher Schuster Center 19 Abba Ahimeir St., Ramat Aviv Tel: (03) 547-2548