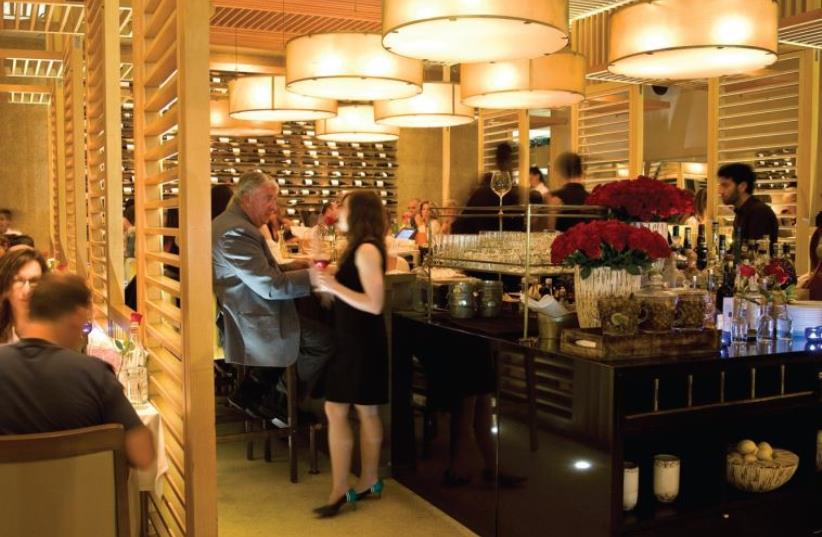 Herbert Samuel restaurant
(photo credit: PR)
Advertisement
Named for the Tel Aviv promenade (which was named for the high commissioner of Palestine), I can only describe the Herbert Samuel restaurant as offering some of the best gastronomical pleasures that I’ve experienced in this country to date. Chef Adir Cohen is the mastermind behind this impressive cuisine. The menu is eclectic but with a Mediterranean touch, and it’s clear that careful thought is put into each dish to produce esthetic, creative and delicious results.The restaurant itself overlooks the Mediterranean on Hayarkon, giving you a dining experience you will never forget (if you don’t mind the gas station across the way). The wait staff is coolly clad in jeans, button-down shirts, ties and aprons.Our waitress was friendly and took care to make us feel at ease.She took her time explaining details of dishes and drinks.Cocktails are tailored to each dish, and our waitress lost no time in advising us. We started with the mint julep. It was sweet, the bourbon infused so well with the muddled mint, and dangerously tasty going down.We began our meal with some delicious homemade bread (NIS 19) together with tulum cheese and seasoned olives (NIS 21). This was followed by slowly cured Ortiz anchovies (NIS 38), which both of us found a tad too fishy for our liking. Next up was the red tuna sashimi (NIS 54/78). Served on a bed of ice, I was so mesmerized by the colors and the beauty of the dish that I almost didn’t want to spoil it by digging in. The sashimi was fresh and tasty.We were then presented with the blue crab (NIS 88) dish. The mixture of tastes and textures of the crab, oregano and fresh lime was absolute bliss. The essence of this dish was complex, and the flavors blended together like magic.After that, our delightful waitress started putting together a beef tartare (NIS 98) using different ingredients that included bone marrow and diced onions with a raw quail egg. Served with toasted bread, the presentation was outstanding. As we took delicate bites of the perfectly cured beef mixed with everything, I watched my companion’s eyes light up as she realized how delicious tartare could be.For the main course, we were treated to the homemade cannelloni (NIS 46/88) stuffed with veal and Swiss chard, served with Parmesan cheese in a very flavorful sauce. The dish was as decadent as it sounds. It looked small but was very filling.Meltingly tender veal was stuffed into a delicate pasta roll that was just slightly crisped on one side as if it had been briefly browned in the pan. It was heavenly.Last we were served sirloin on the bone. Cooked perfectly (medium rare), the steak basically melted in our mouths. It was accompanied by crisp roast potatoes and bone marrow. My dining partner and I tried to eat it as slowly as possible so the experience wouldn’t end.We ordered hot drinks and took a breather. Then came dessert. It consisted of cremeschnitte (NIS 48), a wonderfully sinful German treat consisting of layers of pastry filled with custard cream and small pieces of fruit. It was the perfect balance of sweet and creamy. I enjoyed every single bite. This was followed by a devilishly decadent nemesis bitter chocolate cake (NIS 45) served with tonka ice cream and salted caramel.Herbert Samuel should top any list of best restaurants in Tel Aviv.It represents the city well with its quality of food and service. I look forward to going back soon.The writer was a guest of the restaurant.