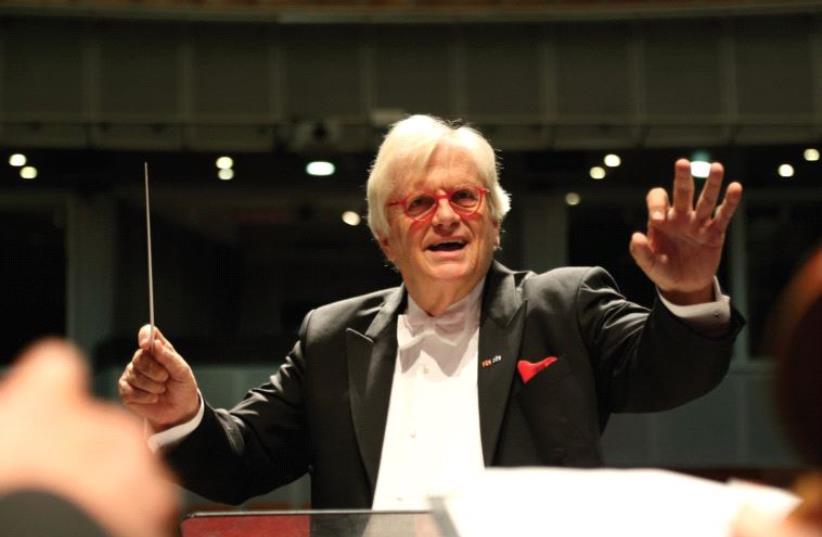 GERMAN PIANIST and conductor Justus Frantz.
(photo credit: DIEGO MITELBERG)
Advertisement
The Israel Sinfonietta Beersheba opens its new season with a series of concerts conducted by its artistic director, German pianist and conductor Justus Frantz. The challenging program features Rossini’s William Tell Overture; Schumann’s Piano Concerto in A Minor (with Frantz as pianist); and Orff’s Carmina Burana.In a phone interview from his home in Germany, Frantz says he has nothing but praise for his Israeli orchestra.“During the years we worked together their sound has improved significantly; it became much more flexible and rich. The orchestra has great opportunities for future musical achievements,” he says.Carl Orff’s scenic cantata Carmina Burana, based on 24 medieval Latin poems, is a crowd pleaser. It has been performed in Israel often, but the upcoming concert may be very special because Frantz was fortunate enough to actually meet the composer and receive firsthand knowledge about the piece.“He loved Latin and Greek and was amazed that I had learned Latin as well. So I was invited to visit him, and we spoke about the piece,” he recounts.Young Israeli soloists such as soprano Alla Vasilevitsky, countertenor Yaniv D’or and baritone Guy Pelc, as well as the veteran Ihud Choir and two children’s choirs – the Experimental School’s and Kollot Mevasseret – will participate.In regard to Schumann’s piano concerto, Frantz stresses that conducting from the keyboard is not an easy task for a pianist. But not only for him, he says. It is also very challenging for the orchestra, “especially in the last movement of this concerto.”As for the upcoming season, Frantz cites the winter concert with Schumann’s Symphony No. 4, “which I have loved since my early childhood. I find it so deep and beautiful,” he says.In another concert, Arie Vardi will perform Ravel’s Piano Concerto, conducting from the keyboard.“I find it very interesting, since Vardi is a great pianist of the old school,” he says.He also mentions “a Beethoven evening with Israeli violinist Asi Matathias” and “a conductor from Armenia, Edward Topchian, who has an excellent career both at home and in Germany.”The opening concerts take place on November 5 at 8:30 p.m. and November 7 at 8:30 p.m. at the Beersheba Performing Arts Center.