Tel Aviv’s trademark boutique hotel celebrated the Summer Solstice at its divine restaurant by introducing a new menu that rings in the scorching season with some dreamy delicacies. 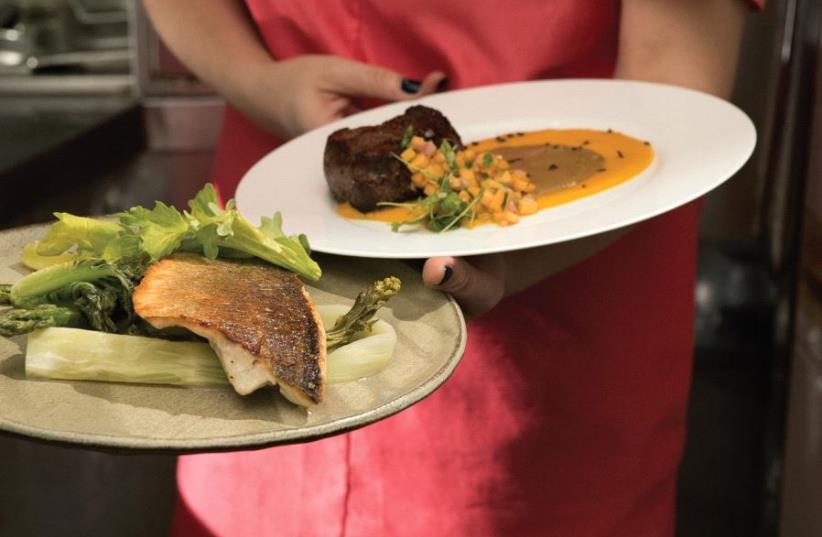 Hotel Montefiore
(photo credit: PR)
Advertisement
The hot season is officially upon us here in Israel, and one of the telltale signs that it has truly arrived (apart from the sting of the jellyfish that have started to abound in the Mediterranean) are the Summer Solstice celebrations in venues across the country. One of the establishments to mark the first day of summer was Hotel Montefiore in Tel Aviv, a boutique hotel that is synonymous with effortless sophistication and luxury. The hotel’s iconic restaurant, which stands at the helm of Israel’s fine dining scene, cooked up some delightful surprises to celebrate the changing of the seasons and proved once again that when it comes to high-class cuisine, its standards are unmatched.

While the restaurant offers a daily changing menu, it was obvious from the first sip of the refreshing opening cocktails that the bar was set very high that night. To begin with, what could go wrong when you start your meal off with a beverage called “Jungle Bird”? A mixture of rum, Campari and pineapple juice, the Jungle Bird (NIS 52) was a fizzy, sweet and sour star that whetted the appetite for the debauchery that lay ahead.Before we had a chance to settle back into our plush leather chairs (the restaurant’s impeccable decor was another example of the attention to detail the Montefiore is known for), a slew of alluring starters was unveiled in a series of small servings.Among the memorable appetizers was the slow-cooked lamb, which took on an Oriental flair with the addition of apricot and cumin chutney and fluffy Yemenite pancakes we couldn’t help but pile on (NIS 68). The sashimi, a modern dish that seems so commonplace in restaurants these days, was a stunner: soft, buttery and dressed in velvety verbena oil and pickled lemon cream (NIS 64).

Two classic margaritas later, and the main courses were royally ushered in. Our two favorites were the beef tenderloin, with seared acro squash and raisin molle (NIS 154); and the elegant tortellini (NIS 86). Executive chef Shlomi Harari exhibited his prowess, as well as his respect for the ingredients he chooses, with the addition of sweet corn, roasted figs and blue Stilton cheese, which all blended together in perfect harmony.The one downer was the duck breast, served with juicy muscat grapes and delicious grilled endive (NIS 128). The duck was a soft, chewy option that paled in comparison to the seamless delivery displayed in the other dishes.

A cheese and biscuit platter followed, showing exactly why the Montefiore is the champion of thorough, well thought-out finesse.The sumptuous meal came to an end with a variety of excellent desserts: goat panna cotta topped with a honey tuile and tarragon syrup (NIS 42); chocolate ice cream (NIS 42), delivered straight from the restaurant’s new ice cream parlor; and a perfect madeleine.As we hobbled away into the scenic Tel Aviv side streets surrounding the restaurant, drunk on divine margaritas and the spell of the Montefiore’s first-rate cuisine and dining experience, we couldn’t help but dream about the next sublime feast.

The writer was a guest of the restaurant.Hotel Montefiore
Not kosher
36 Montefiore Street, Tel Aviv
Tel: (03) 564-6100
Advertisement
Subscribe for our daily newsletter