A respectful nod to fine food 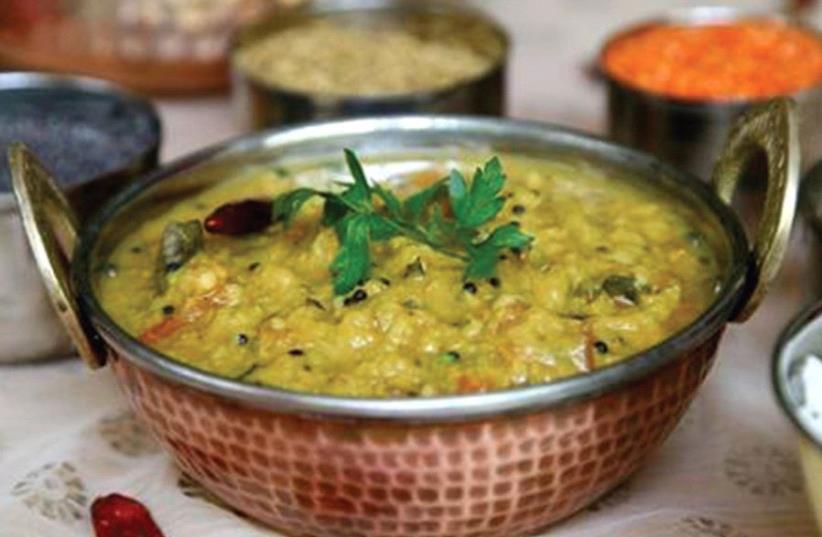 Namaste restaurant
(photo credit: PR)
Advertisement
If you love authentic Indian food, as we do, then Namaste is the place for you. Situated on the Ashdod promenade, the restaurant was opened 12 years ago to serve the large Indian-born population of the city. However, as the owner Yoav Sogaokar points out, only about 30 percent of the clientele are of Indian origin.“We have customers from every ethnic background,” says the pleasant Bombay-born Sogaokar, who made aliya in 1983 and worked as a travel agent before recognizing the need for Ashdod’s 15,000 Israelis of Indian origin to have some home cooking outside the home occasionally.It’s very much a family-run operation with his wife, Sibil, busy in the kitchen helping the chef; his son Yefet contributing to the management; and daughter Ortal overseeing the day-to-day running of the operation.The restaurant is located in a building that also houses a Moroccan wedding hall, complete with arches and decorative stone work. But Namaste is completely separate, an oasis of calm and gentility. Quiet Indian music plays in the background, and there are tablecloths on the tables, which is always a promising sign.We began our meal with the Indian equivalent of the ubiquitous dips: pitch-dark tamarind that was sweet and sticky; mint and parsley chutney – very green; and pickled lemon, which is not exclusively Indian but fitted in well.Of the many Indian breads available, we chose garlic poppadums – small, very crisp and full of flavor. We nibbled on these plus a plate of garlic naan (Indian bread) flavored with chili pepper until the first course arrived.Beer seemed the perfect accompaniment to all this spicy food. It was thirst-quenching but with a kick of its own. We had Belgian beer – Leffe (NIS 26 a bottle).The starter was batata vara (NIS 16) – chunks of potato inside a kind of dumpling made from chickpea flour. Liberal quantities of tamarind sauce made this taste less stodgy than it might have been.We left the choice of main courses to Yoel, who brought us chicken tikka masala (NIS 65) and tandoori chicken (NIS 55). The chunks of chicken breast has been cooked on a charcoal grill and were very tender, tasty and not at all dry as it often can be. The tandoori was a bright orange, the pieces of chicken impregnated with a collection of Indian spices. Both dishes were delicious.The basmati rice on the side was as good as one would expect, every grain separate, with a garnish of diced vegetables and dried fruit (NIS 18). An accompanying vegetable sauce with peas, green beans and peppers was surprisingly bland. Later we were told that customers are usually asked what level of spiciness they would like.When it came to dessert time, Yoel said it had been a problem, as most Indian desserts are dairy-based. He still managed to come up with two excellent afters: a plate of warm mashed carrots with halva, flavored with hel (cardamon) (NIS 18); and faluda (an Indian drink with rice noodles, rosewater and ice cream (NIS 25).Before leaving, we inspected the silver cup that Yoel had received from the Ashdod Cricket Team for his devotion in providing food for the team during local matches. Cricket – a game that can go on for five days at the international level – is as much a part of the Indian heritage of Ashdod is as eating traditional food. And Namaste is all about tradition.The writer was a guest of the restaurant.Namaste Kosher 20 Hatayelet, Ashdod Tel: 053–809-4514 Sunday to Thursday, noon to midnight