A romantic comedy about Bibi from Saudi Arabia

The movie presents a very different side of Saudi Arabia than what we see on the news... 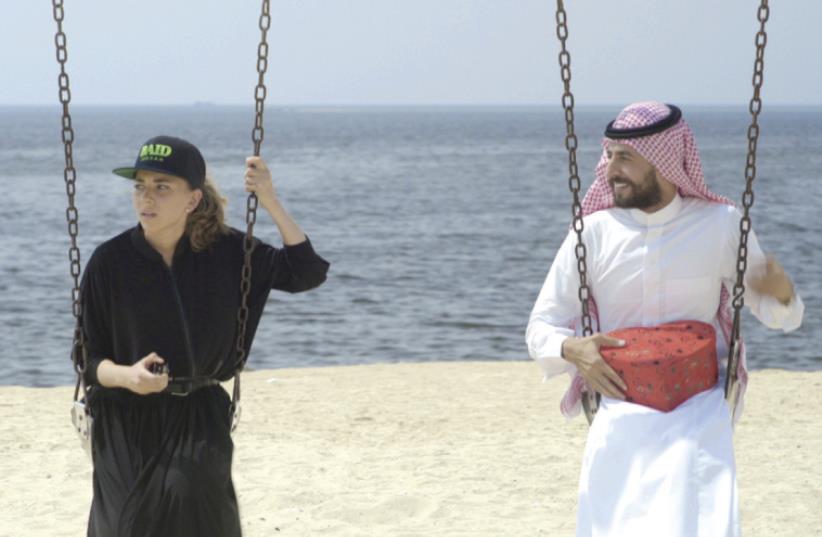 FATIMA AL-BANAWI (left) and Hisham Fageeh star in the Saudi Arabian romantic comedy ‘Barakah Meets Barakah.’
(photo credit: EL-HOUSH PRODUCTIONS)
Advertisement
Seeing Barakah Meets Barakah, a romantic comedy from Saudi Arabia about a woman nicknamed Bibi that was shown at the Zoo Palast Cinema at the Berlinale, just across the street from the Waldorf Astoria, where a different Bibi – Prime Minister Benjamin Netanyahu – was staying, presents a host of ironies.First is the fact that the screening was delayed because it took so long for the director, Mahmoud Sabbagh, to get past the security surrounding the hotel.Then, of course, there is the fact that an Israeli movie critic has to go to Germany to see a Saudi Arabian film, only the second feature film I know of from that country.The movie presents a very different side of Saudi Arabia than what we see on the news. It tells the story of a young man and woman who both happen to be named Barakah – the woman doesn’t like the name and calls herself Bibi – who want to date but cannot find a way to meet without getting busted by the religious police.“It didn’t occur to me that I was making a romantic comedy,” said Mahmoud Sabbagh in the Q&A.“I wanted to make a film about public space,” and how religious restrictions have restricted its use.In the film, the hero, a government official played by Hisham Fageeh (who is known for stand-up comedy as well as acting) reminisces about the freedom that his parents’ generation enjoyed to dress as they liked and go where they wanted. “I think of the movie more as a coming-of-age story or a quirky comedy,” Sabbagh said.However, the digital age is a new era even in Saudi Arabia. The heroine (Fatima al-Banawi) is an Instagram Vlogger who can only show the bottom of her face but who promotes her mother’s fashion line and gives her opinion on many subjects.The movie finds laughs in the couple’s situation, and in scenes when a character takes an alcoholic drink or the heroine bares her midriff, the offending area of the screen is pixellated, to comic effect.The hero, an amateur actor, is appearing in a production of Hamlet, but, just as in Shakespeare’s day, all the female roles are played by men.Sabbagh said that while there are no movie theaters in Saudi Arabia, the movie would be available there on VOD. He said that he would also try to convince authorities to screen the movie in public.The glamorous and appealing Fatima al-Banawi said, “It’s too much of a generalization to say she [her character] is representing Saudi women, but she is very real.”The actors and director emphasized that the movie was filmed in Jedda, which they said is the most open city in Saudi Arabia.“We are privileged to live in a new time,” said Sabbagh. Before the audience headed back out into the chilly streets of Berlin, he added a fitting quote from director Werner Herzog, saying his motto was, “Ask for forgiveness, not permission.”