A short evening of theater in TA

The Stage’s short plays festival offers seven plays, 90 minutes, a lot of laughs and some soul-searching. 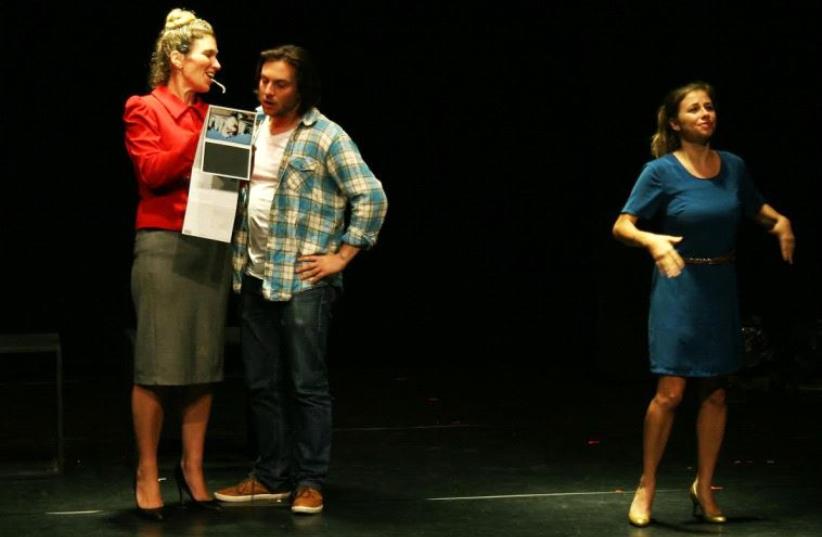 ONE OF the performances from The Stage’s short plays festival
(photo credit: SHANI SHALGI THE STAGE)
Advertisement
Three strangers find themselves in an explosive situation. Two people meet at a cafe and struggle to connect. One person tries to cope with her body betraying her in the most hilarious way.The TLV Short Plays Festival, produced by Anglo community theater group The Stage, is a celebration of the human experience, through a comedic lens.“These are all daily situations but they ask existential questions,” said Udi Razzin, The Stage’s artistic director. “Does God exist? What is spirituality? What is the essence of violence?” “The plays are all these little anecdotes, but kind of like a bird’s eye view on modern life,” he continued.The Stage’s short plays festival, which opens tonight at the Suzanne Dellal Center in Tel Aviv and will run four performances through Saturday night, packs seven plays into an hour and a half, follows a slightly longer one-act plays festival in 2014, a production of the Vagina Monologues and two gender-bent musical revue experiences called Miscast.Rebecca Flanders, the festival’s artistic director, said that The Stage settled on short plays for the practical reason that they could fit together comfortably into an evening, but also because it created greater opportunities for participation in the community.“We sought variety, different colors, different energies, and that gave us an opportunity to cast different types of actors and directors with different strengths,” said Flanders.With each play including a small cast and a director, plus stage managers and a production crew, the event brought together some 40 people who worked tirelessly in the past few months to put it all together.An open call for scripts produced some 100 submissions, which had to be read, evaluated and whittled down to a mere seven that were strong and offered some thematic consistency.Though audiences generally regard comedies as light-hearted endeavors, she noted, they can often have deep or profound messages.“I think they get at ‘how can you laugh at some of these harder things in life?’” she said.What is perhaps most remarkable about the show is that the entire venture is volunteer-based. Of the 40-some people working on it, not a single one is getting paid for their efforts.In Razzin’s view, The Stage offers an avenue to help new recent immigrants find a community and ultimately integrate into Israeli society.“Maybe the next challenge, after a musical, would be something in Hebrew to help olim integrate better,” he suggested.But ultimately, he said, it creates a space to bring together a diverse group of people with a love of theater.“Here you get someone from a settlement in the West Bank and a 70-year-old woman from South Africa who’s been living in Ra’anana for 30 years. They don’t usually have the opportunity to perform, and just to give them that opportunity is great,” he said.For tickets and more info on the festival, visit www.thestagetlv.com.