A one-time Tel Aviv busker recently went global when his single "If God Don’t Follow Me" got played on MTV’s "Teen Wolf." 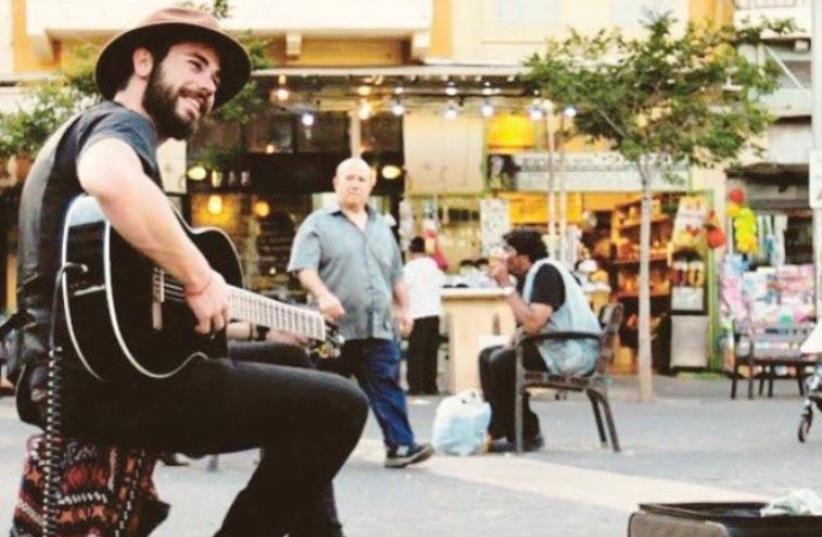 "‘THE RESPONSES you get from people on the street really get you to keep going."
(photo credit: MAY GAL)
Advertisement
Tel Aviv street musician Adam Road woke up one morning to discover that one of his songs had reached around the world.His song, “If God Don’t Follow Me” [ft. Danielle Parente] from his upcoming debut album Trubdr. Adam Road: Exile from the City, was played on an episode of MTV’s Teen Wolf in early January. The tune already has over 40 thousand listens throughout different music sharing platforms such as Soundcloud and Youtube in the past week and a half.“I scrambled that morning to put it up on iTunes and some other streaming platforms,” Road told The Jerusalem Post.“Next, I’m going to go get a haircut and them I’m shooting a music video.”Road honed his musical chops playing on the streets of Tel Aviv, mostly Rothschild Boulevard, for some six years.“The responses you get from people on the street really get you to keep going.You catch someone on a bad day and they’ll come and talk to you, or they’ll just sit and listen to you play.It helps people, and that inspires me a lot,” says Road.“I want them to know that its not just about making a hit song, but it’s about building something together.A musician’s job wouldn’t exist without the listeners. One of the most important mitzvot in Judaism is to say ‘amen.’ It’s just one human recognizing another one’s light, and forming a collective reality. It’s forming a connection between the listeners and the artist.”Road made aliya from the US with his parents when he was 11, and during his army service, he befriended Adam Broza, the son of famed singer/songwriter David Broza. While Road was recovering from knee surgery due to an army injury, he stayed at the Broza home and became enchanted by the elder Broza’s Spanish guitar style. Road sold his electric guitar soon after and began exclusively playing Spanish guitar, making it his own and creating an original sound.After his army service, he briefly resettled in New York to play in a band. But after injuring his hand while attending a Burning Man event, he made his way back to Israel.“I couldn’t play music for five months, so I went to a yeshiva in Safed,” says Road. “I was kind of on a spiritual trip.When I was in Tel Aviv visiting friends, I got an offer to join a start-up company.I didn’t take the job but it inspired me to create my own record label, called GVLABL. I ended up staying in Tel Aviv. I found myself there.”Part of Road’s passion about music arose from unlikely friendship he formed during his time in New York with Giorgio Gomelsky, former owner of the Crawdaddy Club in London which booked upstart acts like The Rolling Stones and The Yardbirds.“His approach to music was that if you serve music, music will serve you. A person like that, who committed his whole life to serving music, made me realize that it’s the most important thing in the world, to serve music. Even King David says it in his psalms. Music’s an important part of Judaism as well. It changed my life,” says Road.One of Road’s goals is help Israeli-made music proliferate outside of its borders.He’s convinced that the country’s artists are world class enough to create the next trend in pop music.“I’m so humbled by the artists in Israel, especially the bands Middle Beast and Beta Zinq. With the bad reputation that Israel gets, I feel like the world doesn’t give it the opportunity to get out there musically because they don’t know what’s going on here,” he said.“Because of the army, everyone here knows how to work together as a team.I believe the next music explosion could come from Israel. I want to bridge that gap and bring more Israeli musicians to the spotlight.”He’s off to a good start with himself as the poster boy.TRUBDR Adam Road will be performing on February 22 at Buxa Bar in Tel Aviv. For more info visit www.facebook.com/Adam- Roadmusic/?fref=ts.