The iconic rock band will kick-off its 'Aero-Vederci Baby!' farewell tour in Tel Aviv on Wednesday at Yarkon Park. 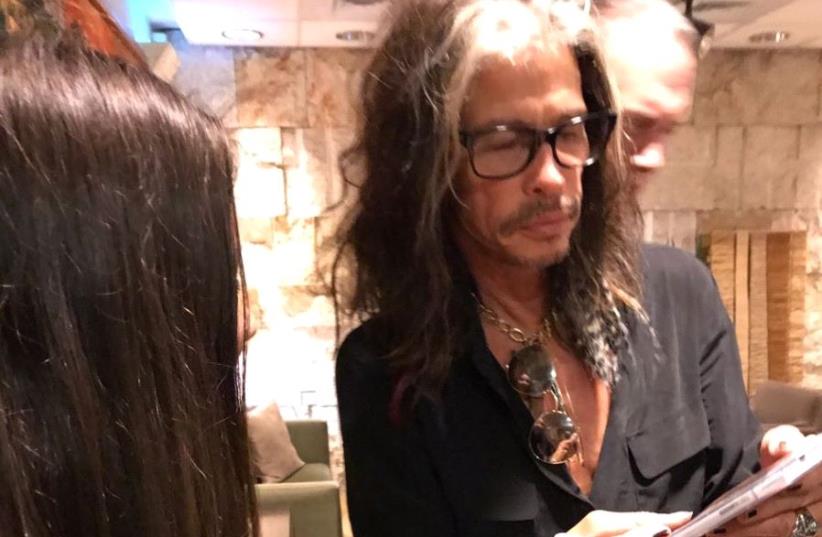 Aerosmith frontman Steven Tyler lands at Ben-Gurion Airport in Israel, May 13, 2017
(photo credit: HAI SHALOM)
Advertisement
Aerosmith frontman Steven Tyler landed in Israel on Saturday evening, three days ahead of his legendary rock band's summer blowout concert in Tel Aviv. The "Jaded" vocalist, 68, signed autographs and greeted adoring fans as he walked this way into the Holy Land. Aerosmith will kick-off its 'Aero-Vederci Baby!' farewell tour in Tel Aviv on Wednesday at Hayarkon Park. Aerosmith (Reuters)The pouty-lipped icon was said to have arrived to the country with his girlfriend. The pair is expected to visit Jerusalem, Masada and Eilat ahead of the much-anticipated show. According to concert organizers, more than 45,000 tickets have already been sold for the gig by America's so-called "greatest rock n' roll band." The performance by the iconic band, often referred to as the "bad boys of Boston," is their first in Israel since their last appearance here in 1994.Along with Aerosmith, Israel is hosting a hefty lineup of summer concerts with world-renowned headliners including Radiohead, Paul Young, Rod Stewart, Guns & Roses, the Pixies, Tears for Fears and more. Last week, Canadian teen pop sensation Justin Bieber jammed, Jacuzzi in tow, for his first concert in Israel since 2011.