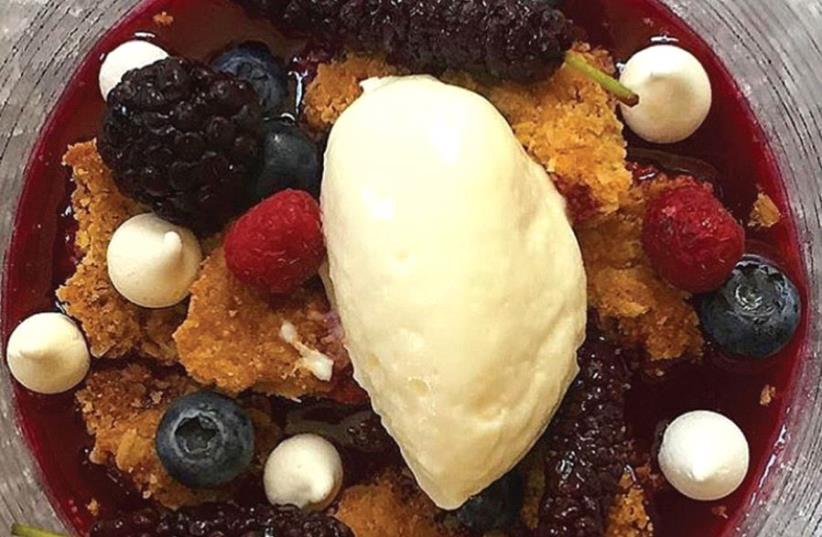 Aria restaurant
(photo credit: PR)
Advertisement
Aria is actually two thriving culinary venues in one impressive downtown building in Tel Aviv: Aria downstairs is an upscale lounge bar, while Aria upstairs is a gourmet restaurant, helmed by talented chef Guy Gamzo, formerly of Rafael. Gamzo, who specializes in creating Mediterranean variations on classical European cuisine, refreshes Aria’s menu several times a year. We were there to check out the most recent update.Mixology takes pride of place at Aria upstairs as well as downstairs, and the cocktail menu has upped its game as well. Over the past year, the number of specialty cocktails has jumped from five to 12, spanning two pages of the printed menu.The Bee’s Knees (NIS 48) – Appleton rum with a browned butter wash, shaken with honey, orange juice and lime, and garnished with orange peel – is described as “a new twist on a classic” that brings to mind “jam and butter toast without the toast.” This interesting cocktail indeed starts off sweet, and finishes with tangy citrus notes.The Aria Sour (NIS 49), meanwhile, is the restaurant’s “revamped and beloved signature cocktail” – Hennessy VS, Orange Curaçao, Amaro Montenegro, lemon juice, maple syrup, and egg white. This deceptively complex drink, with the name Aria spelled barista-style in block letters, is both bracing and refreshing.Our meal at Aria started with a basket of the house bread, served with a creamy eggplant-tehina mousse, mild tomato salsa and soft European butter. There was also olive oil and balsamic vinegar on the table. It took some selfcontrol not to fill up on the crusty whole-grain bread.The daily specials focused on the appetizers, usually with an emphasis on raw fish, reflecting the fresh catch of the day. Raw fish was also the star of two permanent fixtures on the menu: the ceviche and a newer item, the red tuna.The ceviche (NIS 59) was finely chopped sea fish in lime juice, sea salt and olive oil, with tiny flecks of red quinoa and a crisp tapioca puff. What really distinguished this version, however, was a scoop of green apple and jalapeño sorbet, a topping that truly elevated the dish.The red tuna was sashimi in an orange vinaigrette, sesame oil and chili (NIS 68) – slices of exceedingly fresh raw tuna of a brilliant dark red hue, in a vinaigrette that struck the perfect balance between sweet and spicy.Aria’s endive salad (NIS 52) consisted of purple and white endive, Baladi rocket, toasted slivered almonds and crumbles of Gorgonzola, dressed in a slightly fruity cherry vinaigrette. This mix of garden vegetables, nuts and blue cheese yielded a nice interplay of flavors and textures.The sirloin steak (NIS 142/84) was one of the few main courses that had been revised. The prime beef from the Golan Heights was seared in a cast-iron skillet and served on a wooden platter with porcini mushroom stock, cream of garden pea and ratte potato purée. The tender steak – grilled exactly as we ordered – was succulent, and the delicate pea cream and fluffy whipped potatoes were excellent accompaniments.There were two appealing vegetarian options, including leek and mascarpone dumplings (NIS 88). The choux pastry ravioli filled with leek and mascarpone fondue and glazed in lemon butter contained the ideal ratio of vegetable to creamy mascarpone and practically melted in the mouth. It was a delicious pasta dish that was neither drenched in an overly rich sauce nor lay heavily on the stomach.Aria boasts an extensive international wine list, with wines available by the glass, bottle and half-bottle. Our knowledgeable waitress brought us as many tastes as we wanted before we settled on two superb vintages: a 2014 Chateau Golan Cabernet- Sauvignon (NIS 66) and a 2015 Josef Drathen Gewurtzraminer from Rhein, Germany (NIS 44).The long list of desserts presented some difficult choices. The passion fruit and white chocolate (NIS 48) was an exotic combination of passion fruit puree with white chocolate mousse, served over hazelnut crunch and passion fruit sorbet. The purée and mousse practically dissolved on the tongue, and there was an unmentioned bonus of fresh strawberries and meringue kisses. The strawberries and meringue were reprised as islands floating in the red fruit soup, with oatmeal crumble and vanilla ice cream (NIS 48). Served elegantly on a bed of crushed ice, the extraordinary homemade ice cream melting into the sweet-tart soup resulted in another masterpiece of the light dessert.