For decades, Harold Simon, better known as Smoky, was a living legend of Israel’s War of Independence. One of the hundreds of South African Jews who came to fight for the existence of the newly declared State of Israel in its ancient homeland, he was one of the last of the Mahal survivors.

Mahal is a Hebrew acronym for Mitnadvei Hutz La’aretz - volunteers from abroad. Approximately 4,800 men and women from 59 countries came to fight side by side with the Israel Defense Forces or to act as field medics. Some were killed in battle. Many were wounded. Not all the volunteers were Jewish.

Smoky Simon, who was the pride of the South African immigrant community in Israel and the president of World Mahal, died on Monday, just a few weeks short of his 102nd birthday. He will be buried on Tuesday in Herzliya.

After completing his studies in accounting and commerce at Witwatersrand University in 1941, Simon thought he should join the World War II effort. He volunteered to serve in the South African Air Force, where he trained to be a navigator and bombardier. He later transferred to the Royal Air Force and flew missions over Egypt, Libya and Tunisia. He later flew on missions in Italy.

After the war, Simon returned to Johannesburg, where he worked as an accountant. In April 1948 he married his wife, Myra, a meteorologist in the South African Air Force. At the time, the Zionist Federation of South Africa was raising money for Israel, but the newlyweds decided they would give of themselves and informed their families that they were going to emigrate. They got to Israel with some difficulty, landing first in Cyprus, because the pilot of their plane refused to fly into a war zone. 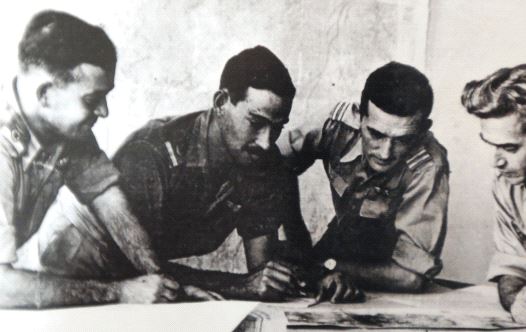 In Cyprus, together with other South African volunteers, they found an aviation company that was willing to take the risk and fly them to Haifa. From there they traveled to Tel Aviv, where Simon joined the Air Force and two days later found himself on active duty. They were both recruited, as Myra Simon’s talents and experience were also needed.

In June 1948, only a month after their arrival, Simon was appointed the IAF’s chief of operations and participated in 24 bombing missions.

Most of the volunteers returned to their home countries once the war had ended, but Simon remained in the IAF until the end of 1950 and was discharged with the rank of major. He and his wife returned to South Africa, where he worked for 12 years as an insurance agent. But Israel was already in his blood, and in 1962, the couple decided to return permanently.

Simon opened an insurance agency in Israel, which did very well, and he eventually sold it to one of Israel’s major insurance companies.

Among the many friends he had in Israel were people from different parts of the world who had come to volunteer in 1948 and who had either stayed or who had returned to their home countries but had felt the pull of Israel to which they had succumbed.

In 1968, on the 20th anniversary of their volunteering to fight in the War of Independence, they formed Mahal. They tried over the years to keep the memory of Mahal alive, but as these veterans grew smaller in number, there were fewer people to talk about Mahal to current army officers and to military attaches of foreign embassies stationed in Israel, and it became an almost invisible dot in the history of Israel.

Simon was also an active supporter of the Menachem Begin Heritage Center, which will doubtless keep his memory and that of Mahal alive, now that Smoky Simon has gone to join his comrades of yesteryear.