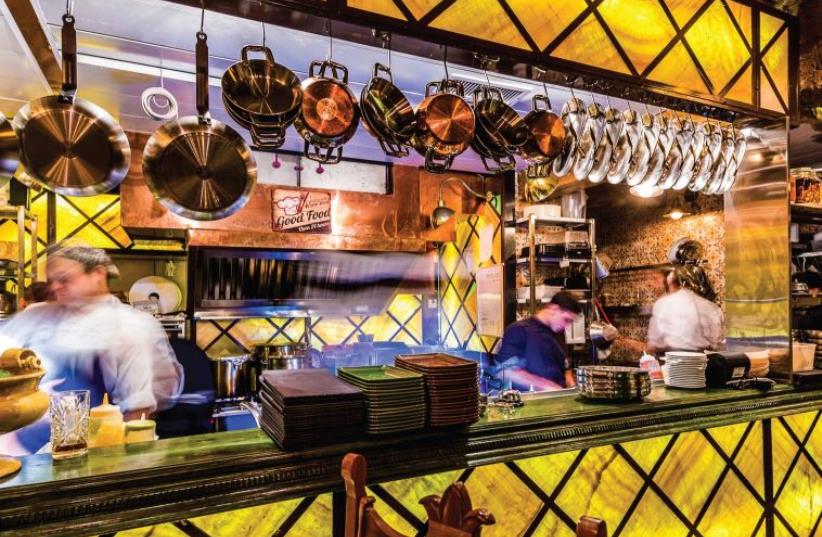 Concierge cocktail bar and restaurant
(photo credit: PR)
Advertisement
Located in the heart of Tel Aviv’s Dizengoff Street, Concierge has been on my “must-try” list for quite a while. I finally made it there last weekend, and it was over and above my expectations! As expected from a cocktail bar attached to Room Service, Concierge stands out in terms of both quality and service. The atmosphere is cozy, elegant, chic and dim, and stays quiet enough – even with tons of people and loud music – for you to have an intimate conversation with a friend. Once you settle in, you don’t want to leave.Everything there is made fresh and with the highest quality care and ingredients, from the bar to the kitchen.Our bartender Asaf was the master of multitasking – no small feat in a fully packed house with a complex cocktail list. I definitely appreciate a bartender who makes great drinks, but when you couple skills with a great bar presence and an extensive knowledge and passion for mixology, you can’t ask for anything more than that.We began with Asaf’s own take on an Old Fashioned, as well as a Blue Heaven (NIS 56). Both were perfectly mixed and expertly presented. The true test of a cocktail establishment is to see how they make one of my favorite drinks. Many times, an Old Fashioned can take on a medicinal taste, either from the abuse or overuse of whiskey or bitters. The whiskey and bitters in this particular cocktail were so incredibly balanced, it could not have been a smoother drink. It took all my restraint not to gulp down the delicious drink. My dining partner found the Blue Heaven indeed both blue and heavenly. Rum and orange juice gives this drink a tropical feel, and the blue Curacao is the secret to making it blue in color. In terms of the food, the menu is geared toward smaller portions. While the portions may be more like tapas size, the flavor is not. Everything on the menu sounded delicious. We started with the hijiki salad (NIS 32) – tiny slices of seaweed, sautéed shiitake mushrooms and crushed peanuts all mixed in a light soy sauce and lemon zest. This was extremely light and tasty. The dressing was not overpowering, while the seaweed was cut into thin shreds and not too chewy.This was followed by the summer fish carpaccio (NIS 48). The fish was super fresh and well seasoned with lemon juice, black pepper and sea salt. I love raw fish and always enjoy carpaccio, but this one really distinguished itself.Next up was the potato skillet (NIS 36), which consisted of a variety of potatoes in smoked marmolada sauce, soft egg combined with a mix of Egyptian spices. I usually douse any type of potato dish with ketchup, but these tasted so amazing that I ate them without any extra seasoning.In between, I asked Asaf to make me his personal favorite cocktail, which turned out to be Corn ‘n Oil. It combines blackstrap rum, velvet falernum, lime juice and Angostura bitters and is served on the rocks. It’s the blackstrap rum that gives the cocktail its crude oil complexion and its fitting name. The blackstrap rum adds spice, bitterness and depth. The falernum adds clove and sweet lime notes that complement the acidity of the fresh lime juice. The bitters add even more spice. Overall, there is a lot of good flavor in this drink. My dining partner really enjoyed the Brain Freeze (NIS 47), which was served in a white plastic skull.We were then served the beef concierge (NIS 42), a Moroccan bread sandwich with long cooked ribs served with Japanese pickles. The meat was tender, flavorful and melted in my mouth. The bread was good, too, and gave the sandwich a firm bite. This was followed by the bun burger (NIS 54), which consisted of entrecote meat in an Asian steamed bun. The burger had an amazing flavor and was very juicy, and the garlic-aioli confit and yuzu added a simple complement to the entrecote. Concierge is a classic after-hours place to go. The crowd always changes, and the alcohol keeps flowing. Pricing is steep but very fair; by no means exorbitant for the caliber of the cocktails, especially considering the location. I have the distinct feeling that Concierge, with its delightful atmosphere, good food and drink, will be around for a long time to come.The writer was a guest of the restaurant.Concierge Not kosher 95 Dizengoff, Tel Aviv Tel: (03) 522-334