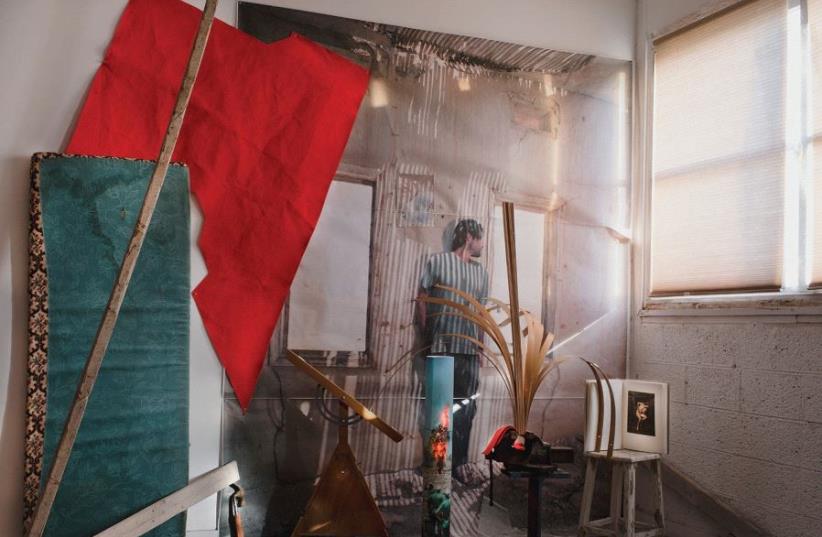 Mark Yashaev, Untitled (Arkadi), 2016
(photo credit: Courtesy)
Advertisement
In his first solo exhibition at the Tel Aviv Museum of Art, Mark Yashaev (b. 1981) presents his award winning oeuvre “Only from this suddenness and on” running through May 27.“The photographs exhibited are from the Yashaev’s personal photographic archive that contain a mixture of the mundane and the wondrous” said Raz Samira, curator of photography at the Tel Aviv Museum of Art.The exhibition title was inspired by a seemingly trivial line from S. Yizhar’s novel Mikdamot (Preliminaries) that caught the artist’s attention.“‘Only from this suddenness and on’ reminds me of the big bang, the moment things are born” said Yashaev.Yashaev was born in the former Soviet Union, in what is now Azerbaijan, and at the age of nine immigrated with his family to Israel.“I was raised in the town of Kiryat Ata, attended a military boarding school and studied Mechanical Engineering. I only discovered photography in my early 20s” said Yashaev.Yashaev went on to study photography at Wizo Academy of Education and Design, and later earned an MFA from the Bezalel Academy of Arts and Design.“I was always interested in direct, classic photography, but it no longer satisfied me” said Yashaev. “I wanted to raise more questions about creating, and searched for a rational, intellectual process that evolves to other practices, such as sculpture and installation.”Throughout his large-scale photographs, Yashaev uses photography processes to create layered narratives, and in doing so links photography with the world of classic, modernist painting and sculpture.“He uses various images and objects juxtaposed with contexts from the history of art and photography, examines them while observing past traditions and preserves and documents them by creating homages to his favorite periods and styles” said Samira.“His work is twofold” said Samira. “It involves building an installation, photographing it, printing, installing the print in the studio and taking another photograph of the photographed set, this time flattened.”What starts out as a two-dimensional archive photograph is transformed into a three-dimensional installation and then returned to a two-dimensional photo. Yashaev’s inventive work process bestows an image that confuses the viewer and challenges the fundamental principles of photography: time, space, light and dimension.Through the construction and photographing of his set-like installations, Yashaev is able to intentionally blur the line between public and private, and interior and exterior. The sets are indiscernible, and thus compel the viewer to make assumptions about the photographed scene.“He examines the spaces encompassing the daily objects that surround us and in which we move, and in doing so exposes the complexity and uncertainty of a location” said Samira.Yashaev’s installations are made from cheap, crude materials, which makes them temporary spaces both contextually and with regard to durability.“The photographs convey a sense of life on the margins, of immigration, uprooting and separation.” said Samira.This transient quality in Yashaev’s reflects the artist’s personal experience as an immigrant to Israel.“I feel as if I haven’t unpacked my suitcases yet, I don’t feel as if I quite belong here, although I have adapted. The sense is one of temporariness” said Yashaev.Yashaev is the recipient of the Tel Aviv Museum of Art’s 2016 Lauren and Mitchell Presser Photography Award for a Young Israeli Artist.

For more info on the exhibit visit www.tamuseum.org.il.
Advertisement
Subscribe for our daily newsletter