J-Town Playhouse presents Stephen Sondheim’s ‘Merrily We Roll Along,’ which takes the audience from the end to the beginning of a bittersweet story. 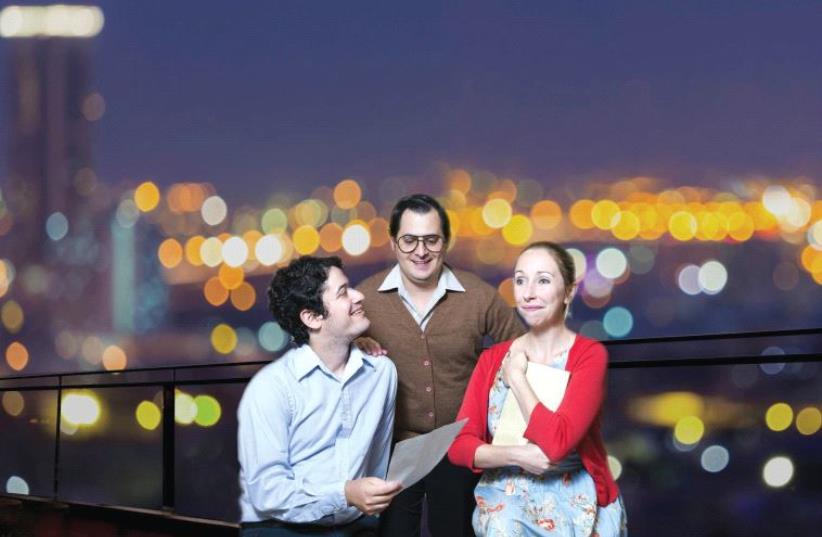 THE CAST of the J-Town Playhouse production of Stephen Sondheim’s musical ‘Merrily We Roll Along.’
(photo credit: ITA ARBIT AND SHOSHANA BALOFSKY)
Advertisement
We all know the old adage that hindsight is 20/20. But J-Town Playhouse’s newest production, the Stephen Sondheim classic Merrily We Roll Along, puts it to music. Three friends navigate the complexities of life, career and friendship, as the audience watches the story told from the end to the beginning. The show runs from today through September 22 at Jerusalem’s AACI Theater. Director Aviella Trapido sat down with The Jerusalem Post to discuss the English theater scene in Jerusalem, Sondheim as a pioneer, and theatrical time travel.How did you get involved with this production?When I made aliya, I got involved with the English-speaking theater community in Jerusalem. I went and did a program at the Vocal Arts Institute and I trained classically as an opera singer, so my background is very heavily entrenched in performing arts, singing and musicals.When I came to Israel, I naturally fell into the theater world here. A few years ago, Raphi Poch invited me to come direct Stephen Sondheim’s Company and I said that he should find somebody else because I was a performer who had no experience directing. He said he thought I could do it and that I should give it a try. We were the first to put on Stephen Sondheim productions in English in Jerusalem.It was a very cool opportunity that was met with a very enthusiastic response from our audience. We were met with a sold-out show almost every night. I had an incredibly talented bunch of people come to audition, so that of course only added to the quality of the shows. The following year, I directed A Little Night Music, also by Sondheim. Again, it was met with great enthusiasm. Jerusalem has a solid following of theater nerds and Sondheim fans. It’s very rare to find Sondheim done in English in Israel, so we have this little niche. We’ve been very fortunate. So Merrily We Roll Along is my third Sondheim.Sondheim is so different and unique in the way that he writes. I’m a huge fan.Can you talk about how the process has been putting the show together?With every production, I’ve learned more and more about what it is to be a director.The process for me starts months before we even hold auditions. I figure out my staging and put together my production team well in advance. This show is a bit different because it goes back in time, so each scene is a different time period. We start in the late ‘70s and move back to the early ‘50s.So that in it of itself was a lot of preparation for me because I’m not American so I had to read a lot of American history. There’s a lot of very subtle humor when it comes to politics in this show. As a director, I need to bring that out as much as possible from my actors so I did a lot of research and a lot of reading. One of the most challenging things about Merrily, which you don’t have in other Sondheim shows, is that there are several versions of it. It was written and rewritten and then produced and reproduced, so I had to pick the version that I wanted to do.

How did you choose... which version you wanted to do?I think the one for me that I liked the most was the most recent release. That one for me was the most fluid and the most understandable. Sondheim was a pioneer; he was ahead of his time when he wrote this play. He wrote it going backwards in time, so it begins at the end. The show revolves around three best friends and it begins at the disintegration of their friendship and then goes back in time to the very first day that they meet. It’s a very cool concept, but something that didn’t exist on the theater scene when Sondheim first wrote it. So it was difficult for audiences to understand when it was first released. Today, the concept of going backwards and forwards in time is much more prevalent in cinema and theater.There is also another cool element, that the female love interest is going forwards in time while her male love interest is going backwards. At some point in the show, they meet in the middle.Was there a lot of interest in terms of actors wanting to be involved? Yeah there was a lot of interest. One of the things I try to do is to give people chances.There is sort of a monopoly that has come over the English theater scene, where the same actors are used show after show. I myself have certainly performed in show after show and I understand where those directors are coming from, they want consistent, quality performances. But I really try to use as many new faces as possible. My cast is almost always 50/50. I have a lot of theater people who have been on the scene for many years, as well as up-and-comers.Sondheim is not easy to sing or to perform, so we are undertaking a major challenge.But it’s always worth it. I have a fantastic cast [which] is very dedicated.Do you have a favorite song from the show?I can’t say that I do. Another aspect of this show is that we hear the reprise first and then the original later on. Usually in musicals, we hear the song and then later on, we hear the reprise. If I had to pick a favorite, I would say “Old Friend,” which is reprised several times in the show. It’s about how these friends are always trying to keep their friendship above all the nonsense.Inevitably, they fail, which of course we see in the beginning. But they do try. It’s a bittersweet show.What message do you hope the audience will take away?I think the reason why the show is loved and hated equally is because it makes us question the choices we have made that have led us to where we are today. Anybody in the audience can relate to at least one of the characters in one of their moments.What’s sad is that we already know from the beginning that it’s going to end badly.Scene by scene, you see the potential and the dreams of these three best friends. You think, “Oh if they had just made this one choice, things could have ended differently.”We can all relate to that.For more information or to purchase tickets, visit www.facebook.com/ events/1870086666552563.