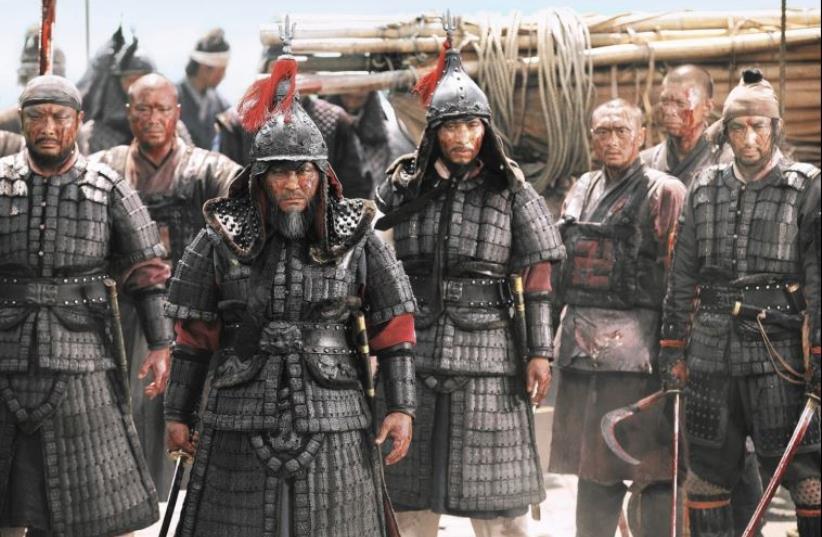 'Roaring Currents'
(photo credit: PR)
Advertisement
The cinematheques of Tel Aviv and Jerusalem will host Korean Film Week, which takes place from November 2 to 7. The lineup includes Kim Han-min’s historical action drama Roaring Currents , which tells the gripping tale of a major sea battle waged between Korea and Japan in 1597. Ode to My Father , directed by Yoon Je-kyoon, is set in the much more recent past and is based on the rollercoaster life of a young boy who is separated from his father and sets out on a path of survival that takes him through Germany and Vietnam. And there’s a reality check or two in store in Hong Sang Soo’s The Day He Arrives.But if it’s drama based on a true story you’re seeking, look no further than The Tenor – Lirico Spinto . The South Korean- Japanese-Serbian co-production tells the compelling story of opera tenor Bae Jae- chul, whose career was progressing by leaps and bounds across Europe when he was struck with thyroid cancer and lost the ability to use his vocal chords. After a Sisyphean struggle to overcome the results of the disease and surgery, Bae eventually regained the use of his voice and the ability to sing, albeit with only half of his original range.The singer, who will attend the film festival, says that today he is much more appreciative of the possibility of producing music with the body. “I feel that my voice has recovered about 60 percent of what it was before,” he notes. “Of course, after the illness, I came to realize that I was given the gift by God, and it doesn’t really belong to me. It belongs to God. So naturally I appreciate it much more than before and take care of my voice with respect and a sense of responsibility.”Bae says that the long, hard road back to health and singing taught him some important lessons about life. “When I lost my voice 10 years ago, it meant to me that I had lost everything. Because singing was, and still is, everything for me and I have been dedicating myself to singing. Singing is my life. But through this experience, I learned so many precious things, which I believe was necessary for me to accomplish my real mission as a singer.”Despite the hammer blow, when he first learned that his singing career was over, Bae says that he did not feel despair.“When I woke up after the surgery of the thyroid cancer, the doctor told me, ‘For you to sing would be like running with only one leg, so it will not be possible for you to sing again.’ It was, naturally, a shocking message for me. But strangely enough, I was very peaceful at that moment.” The singer’s religious convictions came to the rescue. “Since I believe in God, I felt that He gave me this moment for His own sake, so if He needed to make me sing again He would make me sing again. I had this indescribable feeling of peace. So I must say that I have been always hopeful and peaceful. In other words, I could say that I left myself, my entire life, in the hands of God. If not, I could not live.”Despite the miracle of recovering his speech and form of musical expression, Bae still had to come to grips with managing with a drastically pared down vocal arsenal. That must have been quite an Everest to navigate, but Bae says he simply adapted and refocused. “Before losing my first voice, I always tried to be ‘perfect,’ and I made such an effort to be perfect as a professional singer. But now I cannot be perfect vocally and technically [the way] I wanted to be before. But through this experience, I came to realize that it is not possible for humans to be perfect. It is one of the biggest lessons I learned by losing my voice. And then I realized that I have to accept what I am, and I can only do the maximum of what I can do with what I am, with the sincerity, gratitude and love for the people. That is what God wants me to do through my singing. Because my second voice was created by God, and I have to work for His purpose.”The road back to singing also made Bae amenable to some previously disdained material and shifted his order of priority. “With my limited voice, I cannot be on the operatic stage,” he notes. “That made me open my eyes to so many beautiful songs that I didn’t care much for before. They are not heroic at all like operatic arias of a tenor, but each of them gives us hope and love.”Bae was only marginally involved in the making of The Tenor – Lirico Spinto but says he is delighted with the end product. “Thanks to everyone on the project, I have to say that this is a great film, and I am so happy with the result. But it is a kind of strange feeling to sit and watch a movie about my own life. Maybe because this film is almost exactly like what happened with very little fiction, I feel like I am watching a documentary.”Bae would also like the film audience to take home some important messages. “Never give up, trust each other, love each other, support each other, then a miracle will happen to everyone,” he says. He adds that he is looking forward to attending the screenings in Tel Aviv and Jerusalem. “This will be my second visit to Israel. But I feel a special emotion this time on the occasion of releasing our movie.”For more information about Korean Film Week: (02) 565-4333 and www.jer-cin.org.il; and (03) 606-0800 and www.cinema.co.il