Award-winning Israeli actress Moran Rosenblatt immerses herself in the emotional role of a young woman with a mild mental disability in the new film ‘Wedding Doll.’ 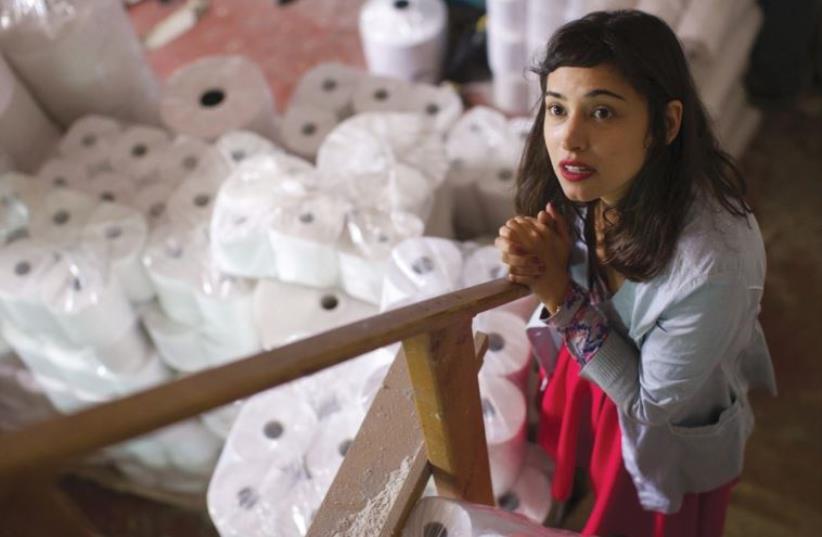 ‘WHENEVER YOU get a role, you get into a world you don’t know... To act, you have to have the ability to understand and identify with people who are different from you,’ says actress Moran Rosenblatt, seen here in ‘Wedding Doll’
(photo credit: URIEL SINAY)
Advertisement
‘Whenever you get a role, you get into a world you don’t know. There’s a family, and a community, a whole other world you have to understand and get to know. I just work on the specific details of that world. To act, you have to have the ability to understand and identify with people who are different from you,” said Moran Rosenblatt, the star of the new Israeli movie, Wedding Doll, directed by Nitzan Giladi. “This character is the farthest from me that I’ve ever been.”In the movie, for which she won the Ophir Award for Best Actress, Rosenblatt plays a young woman with a mild mental disability, who is a gifted artist. Hagit, the character she portrays, creates beautiful bridal dolls and is fascinated by the world around her, but is heartbreakingly vulnerable to anyone who would try to take advantage of her.“We met with people who had disabilities and we saw a theater group from Akim” – an organization that helps people with various disabilities. “We watched a rehearsal and talked to them about their lives.”Rosenblatt burst onto the Israeli movie scene in 2011 in the movie Lipstikka, in which she played a young Israeli Arab. She is extremely pretty, but, more than that, she has a rare kind of screen presence. You can’t take your eyes off of her when she’s in a scene. Although Lipstikka did not play very long in theaters, Rosenblatt got her first Ophir nomination, for Best Supporting Actress.She went on to play the girlfriend of a young man struggling with his sexuality in Snails in the Rain. Last year, she got her first starring role in Matti Harari and Arik Lubetzki’s Apples from the Desert, in which she portrayed an ultra-Orthodox young woman who falls in love with a secular kibbutznik and moves in with him.But she acknowledges that the part of Hagit in Wedding Doll, a young woman who is kept isolated from the world by her overprotective mother (Assi Levy) and falls in love with the son of the owner of the factory in which she works, was her most challenging part to date. Many young actresses wanted this role, but Rosenblatt convinced director Nitzan Giladi that she was the one.“When Nitzan wanted to pick an actress he saw something in my character that was similar to the character of Hagit. In my smile, he saw the character. That was the key.”Although Hagit’s family are conflicted and confused about how to deal with her, Hagit is optimistic and upbeat, and Rosenblatt’s performance conveys this very clearly.“Roy Assaf [the actor who co-stars with her in Wedding Doll] talked a lot to make the relationship seem real. We worked on what he thinks of her, and how she sees him.At first, it’s not clear. It’s a love story but they aren’t sure about each other.” Assaf’s character truly cares for Hagit, but he does not have the strength of character to admit to his family and his friends that he loves someone who is so different.“We wanted to work [for] enough time to figure out their relationship. When we got to shooting, I knew that I could live the character.”Although she has been to a few international film festivals by now, Rosenblatt is not jaded, and says that attending the Toronto International Film Festival with Wedding Doll last fall was a thrill.“I still get excited at film festivals. Toronto is a huge festival, there are 400 films there. It was amazing to see that the reactions were exactly the same as in Israel. It’s not just a film for Israelis, there were great reactions from the audience there.”She has since attended the London Film Festival with Giladi, where she was also impressed with the intense audience reaction to the film.Rosenblatt is currently busy, not only with filming a new role in an Austrian-Israeli co-production, but also with studying screenwriting at the Sam Spiegel School of Film and Television, Jerusalem.“It’s very exciting. I want to direct. I got into acting because I love all the roles I play, but to direct and write roles, from the first minute you think of it to bring it to the screen is an amazing adventure. Nitzan thought for years about Wedding Doll. I want to do that with my movies.”