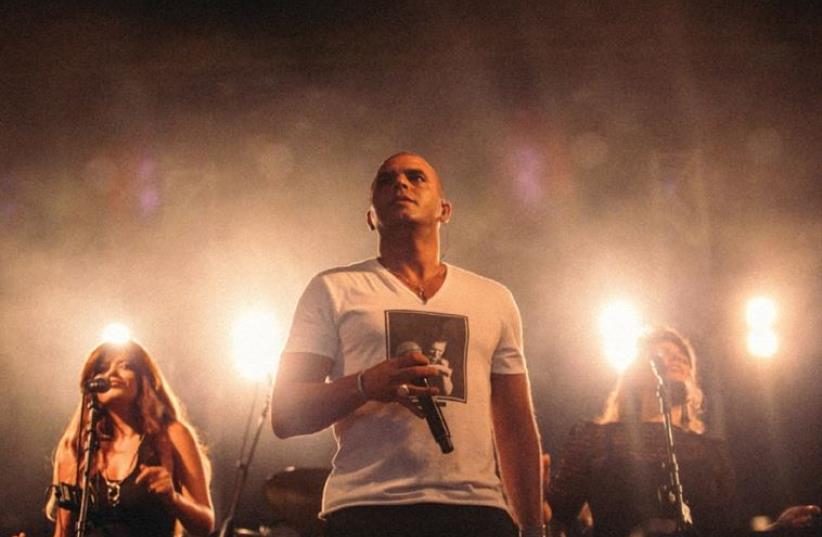 Eyal Golan performs for new IDF recruits in Bat Yam.
(photo credit: Courtesy)
Advertisement
Children of celebrities often get lavished with expensive and extravagant gifts for their birthdays.But there is just one thing 10-year-old Shayla Somer Gibson wants this year: tickets to an upcoming Eyal Golan concert.On Tuesday, Tyrese Gibson, an American actor and singer, shared a video of his daughter with his almost 9 million followers.“Hey dad, for my birthday I really really REALLY want you to get me four tickets to see the Eyal Golan concert,” she says in the video.

Gibson wrote alongside the post: “My daughter speaks fluent Hebrew she’s in Israel and today is her birthday and I might need you guys help in making my daughter’s birthday wish come true..... He’s a local artist in Israel help!!!!! Feeling the pressure.”Well, Gibson didn’t have to wait too long, as on Wednesday Golan reposted the video on his own Instagram page, and wrote: “I’m gladly accepting her request and will invite her to my next concert personally.”A representative of Golan told The Jerusalem Post that the singer’s managers are trying to contact the family. Golan is performing Thursday night in Haifa and then Tuesday night in Ashdod.Of course, Gibson could likely afford the four tickets to Golan’s show himself – they’d set him back NIS 1,200 or so (about $340). When Shayla was eight, Gibson bought her her own island, according to People magazine, which likely set him back a bit more than concert tickets.

Praying at the wailing wall in Israel - as a born again Christian son I was so moved by this and I also went to float in the Dead Sea and couldn't believe what I had experienced - My daughter is Jewish and speaks fluent Hebrew and her entire family lives there!!!!!

Gibson, 38, had a prolific music career before turning his focus to acting. He has released seven studio albums and been nominated for three Grammy awards, as well as starring in both the Fast and the Furious and Transformer movie series. Shayla’s maternal grandmother, the mother of Gibson’s ex-wife Norma Mitchell, lives in Israel, and Mitchell herself has Israeli citizenship, according to the TMZ website.In January, Gibson posted a photo of himself praying at the Western Wall on Instagram, taken on an earlier trip to Israel.“My daughter is Jewish and speaks fluent Hebrew and her entire family lives there!” he wrote/