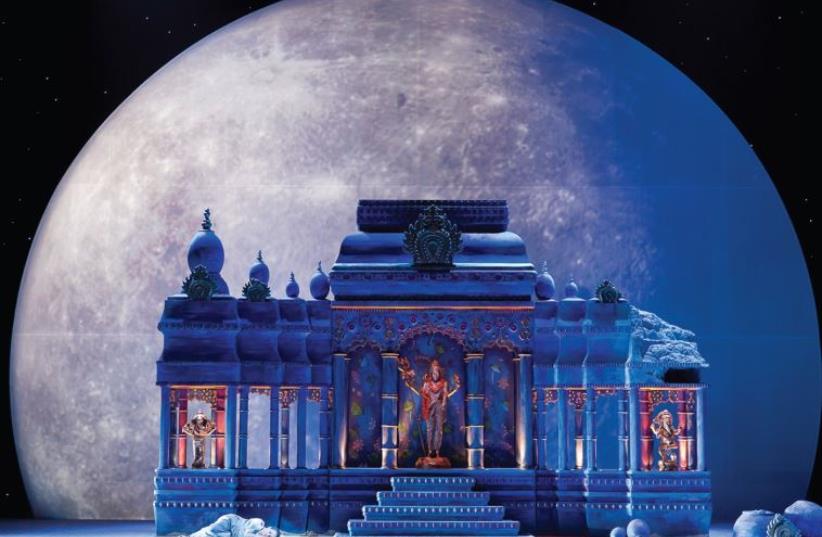 The Israeli Opera performs ‘The Pearl Fishers’
(photo credit: PR)
Advertisement
It may be a post-modern world in which we now have seemingly unlimited access to information about just about every work of art around but, happily, there are still a few that slip under the radar. Bizet, of course, is one of the better known composers of opera music, but The Pearl Fishers does not generally feature in the Top 10 operatic roster.“That’s a shame because there is some wonderful music in the opera and a couple of well-known arias,” notes Steven Sloane, who will be on the conductor’s podium of the Opera House in Tel Aviv tomorrow evening to preside over the first performance of the work’s current run here. The popular sound bytes from the opera include “Au fond du temple saint,” generally known as “The Pearl Fishers’ Duet.”All told, The Pearl Fishers will be presented 14 times – in French, with English and Hebrew surtitles – with the last show taking place on July 16. Sloane will split conducting duties with Ethan Schmeisser, while Dutch stage director Lotte de Beer has cooked up an intriguing, typically left-field visual concept for the storyline, which is based on a libretto by Eugène Cormon and Michel Carré. The opera tells the tale of two men whose vow of eternal friendship is threatened by their powerful attraction to the same woman. The latter also has a pretty heavy-duty issue of her own to settle, as she battles with the conundrum of equating the affairs of her heart with her sacred oath as a priestess.Sloane is particularly pleased to be at the helm of the project here.“The Pearl Fishers is always known as the poor cousin of Carmen,” he notes. “But, in fact, the music is absolutely fantastic and very very inspiring.”Even so, the conductor says it has been difficult to get the public on board over the years.“The libretto has often been criticized. It is a story that basically has too many circumstances that happen one after the other without any background. It starts on a beach in Sri Lanka – Ceylon – and there’s a group of pearl fishers who want to elect a leader,” he says.They opt for a man named Zurga – performed in the upcoming probuction by Serbian baritone Nikola Mijailovic and American counterpart Michael Anthony McGee. He says, “Okay, I’ll do it but, boy, I kind of miss my old friend Nadir. Oh, look who’s coming – here’s Nadir.” Then they talk about the time they were both in love with a priestess… “Oh, look who’s coming in a canoe. It’s Leila.”The role of Nadir is played by American tenor Robert McPherson and Russian Alexei Dolgov, with sopranos Cristina Pasaroiu from Romania and Russian-born Israeli Alla Vasilevistky dividing the Leila slot between them.The Los Angeles-born Jewish conductor is also delighted to be frequently involved with the Israeli Opera. Sloane speaks fluent Hebrew and has made Tel Aviv a sort of second home over the last three decades. He also has plenty to keep him gainfully employed elsewhere, including a 20-year tenure as general music director of the Bochum Symphony Orchestra in Germany, which is finally about to take up residence in its first permanent home, the Musikforum, after close to a century of sterling artistic work.Sloane does the tried and tested operatic repertoire rounds but also likes to dip a toe or two into choppier, more contemporary musical waters.He channels some of that through his position as music director of Operafront, the progressive Dutch opera company founded by de Beer. Sloane and de Beer are partners both on and off the stage.As stage director, de Beer has cooked up a thought-provoking staging strategy for The Pearl Fishers.“The production brilliantly uses the storyline in a contemporary way,” says Sloane. “The production is a bit like a TV reality show.”The conductor feels that the plot of the opera demands an inventive line of attack.“I think the problem with The Pearl Fishers is that it is very hard to do in a traditional way. The libretto doesn’t really hold up in terms of the tension and the set-up of the characters,” he says.Sloane returns to Bizet’s efforts.“The music is just so inspiring. There are musical highlights and hits one after the other. The other thing that is wonderful in the opera is the use of the chorus. This is an opera in which the chorus plays a central role,” he adds.As Sloane is a self-confessed fan of choral music, that suits him to a T.“I am very happy to work with the Israeli Opera Chorus. I have known many of them for 30 years,“ he says.In addition to de Beer’s envelope-pushing directing, Sloane notes that in terms of language, the upcoming run is a first for the Israeli Opera.“I think a Hebrew version was done in the old Israeli Opera but, to my knowledge, it has never been done in French here. It is a very accessible piece and a very entertaining piece which, in many ways, is also very funny. The music is also very beautiful, so I think we have all the ingredients to make a perfect show.”

For tickets and more information about ‘The Pearl Fishers’: (03) 692-7777; www.israel-opera.co.il
Advertisement
Subscribe for our daily newsletter