‘Bread and Roses’ in Ramat Gan

The exhibition, featuring works by a number of local artists, is held annually by the Worker’s Advice Center to raise money for its Woman and Work initiative. 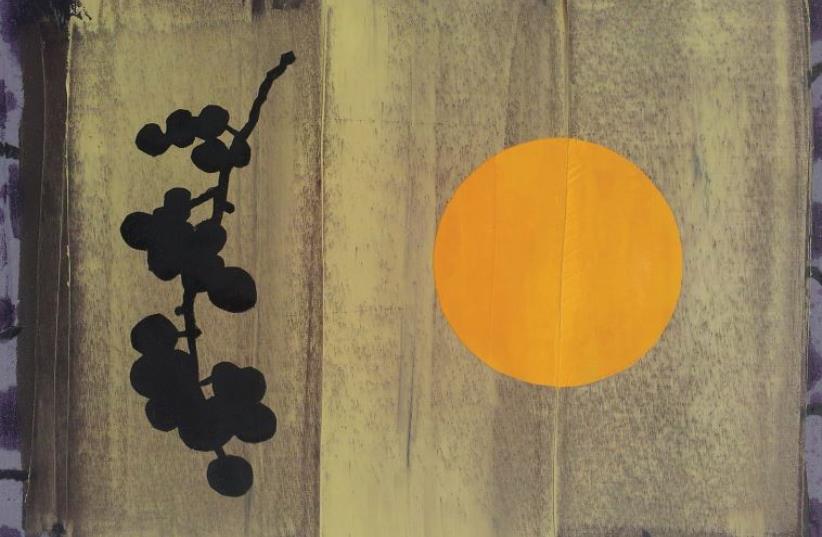 Larry Abramson: ‘Impression de Soleil, 2015’
(photo credit: Courtesy)
Advertisement
At the entrance to the Worker’s Advice Center’s conference room in south Tel Aviv, propped up against a piano that hasn’t been played in years, sits a framed photograph of a seated Yona Wallach next to a otherwise nude, Tefillin-clad Uri Dotan. The image, taken by Micha Kirshner in 1983, is one of Nir Nader’s favorites from the countless pieces of art stacked upon shelf after shelf along the perimeter of the room. This collection is spillover from 10 years of the Bread and Roses exhibition, which will take place this weekend at Shenkar College of Engineering and Design in Ramat Gan. The event, featuring works by hundreds of local artists, is held annually by WAC to raise money for the organization’s Women and Work initiative.“I love this image,” says Nader as he points out the two-pronged electrical socket at the center of the Kirshner’s photo. “There is something very Israeli about it.”To Nader, co-curator of Bread and Roses, “Israeli” is a complicated word. For the past many years, the 50-year-old father of two has woken up every morning with the goal of changing the national reality to a more just, inclusive one.“I was born and raised in Rishon Lezion. Until my late teens, I considered myself to be right wing,” he explains. Nader is a tall, slim man with bright eyes and gray hair. Following his “bitter experiences in the army” Nader began to question his political standing. Then, during the first intifada, Nader found himself faced with an impossible situation. “I was doing reserve duty and was asked to serve in the occupied territories. I refused.” This moment, one of a string of milestones, paved Nader’s path to where he currently sits.As the Tel Aviv branch manager of WAC, Nader works tirelessly to improve the daily lives of hundreds of Arab communities throughout the country, be it by organizing the truck driver’s union or providing vital job training for Arab women.“We are a grass roots movement that believes that the only thing that can give hope and a future is coexistence. I believe that it can happen,” he says. “It means, however, that we will have to give up on the comfortable notion of nationality and expand our horizons. Every person has to break this down into daily actions. Learning Arabic is just one of many steps that Jewish Israelis can personally take toward finding an alternative to the current deterioration in our society, so, seven days a week, WAC holds Arab language classes.”Just behind Nader is a table laid out with an array of enticing products, from soaps to olive oil. These goods, which are marketed almost exclusively abroad to chains such as Whole Foods, are the output of Sindiyana of the Galilee.“In Israel, there is an entire demographic that can contribute everything they have to offer but the government doesn’t allow it to happen. One of our goals is to develop Arab agriculture and Sindiyana is a big part of that plan.”Last month, WAC and Sindiyana hosted a communal olive-picking event in Wadi Ara, which was attended by nearly 500 Arab and Jewish families.Women and Work is another major part of WAC’s long-term plan. The initiative came about a decade ago as a means to address the difficulties and needs of the female Arab population.“We initially started with a project dedicated to finding work for men but we quickly saw that the women were in very bad shape. The oppression of women in Israeli society is a major issue and it especially impacts Arab women.More than half of Arab children in Israel live under the poverty line. The women have very little education and earning potential. We provide courses on gender, sexuality, empowerment and domestic violence alongside job training classes. We give these women the opportunity to cope with the difficulties of their existence,” says Nader.Many of the current leaders of Women and Work began as participants, proof of the project’s dire necessity and success.As an independently funded organization, WAC’s only means of continuing to develop such programs is via private fundraising. The money raised from Bread and Roses exhibition will go directly toward providing the participants of Women and Work with the tools necessary to sustain themselves and their communities. However, the goal of this event, in Nader’s eyes, goes far beyond the financial.“Since we started Bread and Roses in 2006, we’ve been through the Second Lebanon War, Operation Pillar of Defense and [Operation] Protective Edge.The Israeli reality doesn’t allow you to go for too many months without a crisis. I think that because of that, more and more people want an alternative and realize that they have to actively pursue it. This event makes a very positive statement. You don’t need to buy the art in order to be part of if, just to come and show solidarity.”

Bread and Roses will take place on November 26, 27 and 28 at Shenkar College for Engineering and Design. For more information, visit www.wac-maan.org.il or www.breadandroses.org.il.
Advertisement
Subscribe for our daily newsletter