Calexico heads to the edge of the sun

Joey Burns, the front man for the heralded Arizona band, talks about life, music and family ahead of his return to Israel next month. 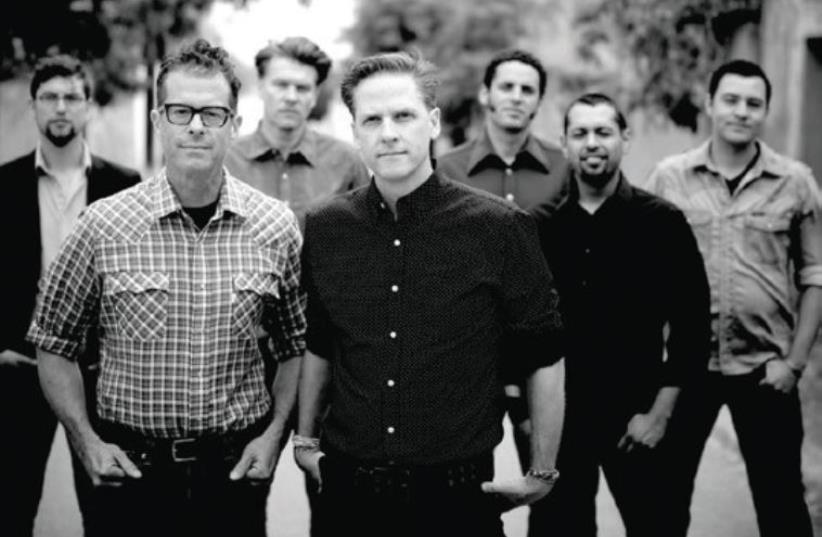 CALEXICO.
(photo credit: Courtesy)
Advertisement
It doesn’t happen often that you can tell one of your favorite songwriters how much you love one of his songs.And it’s even rarer when the songwriter responds with humility and gratitude instead of a brush-off “thanks.”But just like “Hush,” the hymn-like, shadowy ballad from Calexico’s 2012 Album Algiers is not your run-of-themill song, its writer and singer Joey Burns is not your everyday rock star.“I’m so glad you said that you like ‘Hush’ – that songs means a lot to my family,” said the youthful 46-yearold Burns during a phone call from his home in Tucson, Arizona earlier this month that was punctuated by giggles in the background from his four-year-old twin daughters.“It’s a personal song, and for me, it represents my song to my wife and family that focuses on a lot of the life lessons we’re struggling to maintain and serves as kind of a reminder to me. I’m really glad that you like that song. I think I’ll relearn it and do it when we’re in Tel Aviv.”Israel has become a fixture on Calexico’s touring schedule, and the band and its devoted Israeli fan base have developed a mutual admiration society – for good reason.For over 15 years, the sprawling band led by multi-instrumentalist Burns and drummer John Convertino has used its rustic desert base to incorporate everything from dusty, lo-fi rock, Duane Eddy twang and Springsteenian earnest Americana to spaghetti-western noir, mariachi and Portuguese Fado.Their rousing performances in 2009 and 2013, both in Tel Aviv, have helped make them local legends and explained the sell-out of their upcoming show with special guest and frequent collaborator Depredo at the Gesher Theater on November 16. As a result, the band has added a second show the following night at the Barby Club, the site of their earlier triumphs.In a broad-ranging interview, Burns talked about the challenges of maintaining a music career while facing adult responsibilities, the musical wanderlust that has Calexico traveling to New Orleans and Mexico City to record albums and the band’s special relationship with Israel. Here are some excerpts.You’re now officially parttime Israelis – what stands out from your previous times here? Well, the first time is always the most impressionable. We did the tourist route and went to Jerusalem, which I loved.For me, the food stood out – it was so fresh. And just getting to know the people there, who were downto- earth, open-minded and shared similar views. The last time, our local promoter Eran [Arielli] took us to hang out with a local artist and we had a home-cooked meal. We also went to a very eclectic café where they were spinning vinyl. We met a lot of musicians and there was talk about collaborations. The more we return, the more those ideas become part of us. And hopefully, we’ll one day follow through.For musicians like ourselves, when we go to Mexico City, say, to work on writing songs, we see a different version of what we see and hear in the news back home. The same thing applies to when we visit Israel. It’s a different story than what you’re told and that really impresses us and gives us hope.We’ll be in Israel for two days – which gives us that extra time for a quality experience that can lead to bigger impressions and more inspiration.And then there’s the concerts, which is the reason why we’re coming.

‘Algiers’ was recorded in New Orleans and your new album [‘Edge of the Sun’] was written and partially recorded in Mexico. What does the band get out of traveling to different locations to write and record? As we’ve gotten older, we’ve become very comfortable here at home in Tucson, and we have our routine.It’s nice to mix up that routine and to focus our perspective on somewhere that we’re interested in learning more about or somewhere that we hope will influence the music in some way.Sometimes those influences, like in Algiers and recording in New Orleans, are more subtle – more to do with the tone of the lyrics or a mood. You don’t hear Trombone Shorty taking a big solo.When we went to Mexico City in April, there were still celebrations carrying over from Easter, so there were fireworks going off every night.There was this beautiful contrast of tradition and history with modernity there – I love that balance. And all the while, it was very soulful.As far as the music goes, some of the songs we wrote there had a folkloric quality, like “Coyoacan,” which features a harp. The music to “Falling From the Sky” was written down there and we liked the energy, spunk and spark so much that we decided to keep the demo version and build on it from there.For me, having a window of no distraction for 10 days is hard to find at home. It made sense to take that time and go away as a band. We slept in the same room, and a friend of ours’ mom came every day to bring us Mexican food. It enabled us to just focus on music and the band and what we were trying to do.How do you balance the responsibilities of being in a touring band and the responsibilities of a home life?What you find is that it’s a constant learning process as our kids get older.We have a wide range of children – John’s oldest is 21 and his youngest is 11, and my daughters are four.People ask me why we don’t bring our family on tour, but we really can’t do that. It’s just not feasible. That kind of lifestyle of not getting enough quality sleep wouldn’t do well for them.But next week we’re getting the kids their passports so they’re ready to go if we want them to join us for a couple days and then hang out somewhere on vacation.Tomorrow, we’re driving eight hours to San Diego to spend some time together before we leave on our last tour of the year. And last night, my wife and went to see [Swedish indie folksinger] Jose Gonzales; just fantastic.My wife said to me, ‘we haven’t been out to a show together in four or five years’ and I said ‘wow, you’re right!’ It’s kind of amazing, but it was so nice. It seemed like 20 years later, not four or five, in terms of our maturity or where we are in life. It just seemed to be so much further down the road.And that’s beautiful – when you can look around and remember what it was like at 20 and the questions you had – ‘what am I gonna be? Do I want to have kids?’ And then seeing where you are now.Are you concerned about coming to Israel while the current wave of terrorism is sweeping the country? Certainly we’re concerned about the people in the region. And we’re in touch with Eran our promoter, and our manager was just in Jerusalem last month. Everyone is in tune with what’s going on, and our thoughts go out to the people.Of course, safety is a concern – I have to be concerned because I’m a dad. At the same time, I want to go even more because of what’s going on – just to be able to sing a song like “Hush” and help us people open up.One of our new songs, “Bullets and Rocks,” somehow resonates with what’s going on there even though it’s written about what’s going on here on the border between the US and Mexico.We have our own examples of tragedy and violence and we’re involved in several conflicts around the globe.And that’s part of why we want to come to Israel – to talk to the people and to see and encourage other artists who are perhaps doing something to better the situation.
Advertisement
Subscribe for our daily newsletter