Putting politics aside, local jazz band Hagiga are ready to strut their stuff at this year’s Copenhagen Jazz Festival. 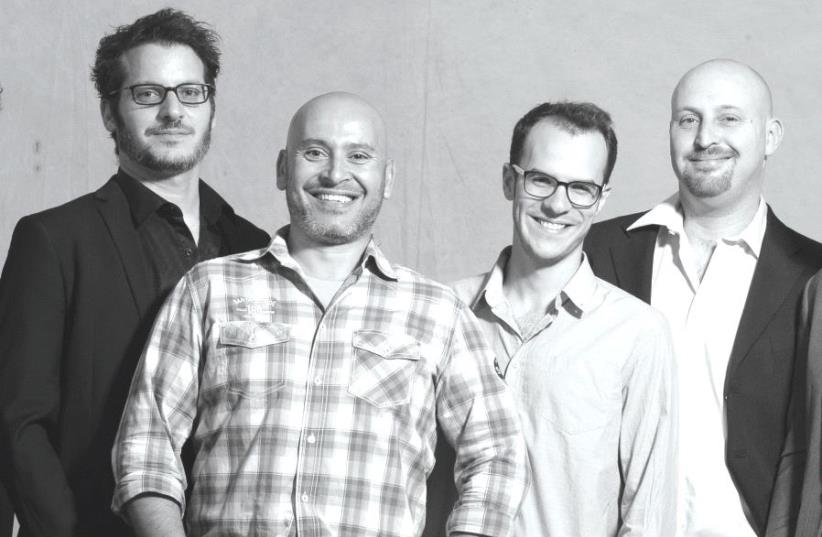 Hagiga founder and reedman Alon Farber (second from right) seen here with the rest of the group
(photo credit: NOA ZENI)
Advertisement
Hagiga is not a bad name for an entertainment troupe of any ilk, although one might not readily associate the Hebrew word for “celebration” with the output of a jazz band.Appellation issues aside, the eponymous sextet is a polished creative venture headed by reedman Alon Farber, who writes the vast majority of the numbers, with ever-present drummer Dani Benedikt contributing a couple of the works on the band’s third release, New Directions. The album will be officially launched at a gig at the Haezor venue in Tel Aviv on April 15 (8:30 p.m.).New Directions makes for fine listening, and is all the more noteworthy considering the group’s stop-start history. Farber founded the group back in 2003 when it released Exposure, which featured now internationally acclaimed trumpeter Avishai Cohen on three of the eight tracks. There have been all sorts of personnel permutations over the years with the third founder member, alto saxophonist Hagai Amir, the only other constant in the lineup.While Hagiga has managed to keep the performance and recording wheels turning, albeit periodically, the group, and in particular Farber, made a serious media and social media splash a week or so ago when it became known that the group’s application to take part in this July’s Copenhagen Jazz Festival had been rejected, ostensibly simply because of the band’s nationality. The understanding was that the basis for Hagiga’s exclusion was political. Farber retorted that, if the festival organizers were intimating that the sole responsibility for the current state of the Middle Eastern conflict rested with Israelis, they had got it wrong. The saxman suggested that the Palestinians were also full partners in the ongoing friction and, as such, the Danish event should not be prepared to accommodate Palestinian artists either.At the end of the day, the Danes retracted and Farber et al will duly strut their stuff in Copenhagen on July 11. All’s well that ends well, and in fact one might even say all’s well that ends better. Nineteenth century American sometime politician, showman and circus owner Phineas T. Barnum was credited with declaring that “there’s no such thing as bad publicity.”That may be so, and Hagiga is certainly better known in Denmark, and elsewhere, following the unfortunate incident, but Farber really just wants to focus on playing and developing his craft.“To tell you the truth I generally stay well clear of politics,” says the fortysomething musician. “In the first few days I was bombarded with interviews from the Danish media. It was crazy.”The non-media side of things was easier to take.“I got so many positive remarks and responses from people in Denmark. It was heartwarming.”The seed for Hagiga was sown around 20 years ago, when Farber and Benedikt were students at the prestigious Berklee College of Music in Boston. It proved to be a fruitful confluence and, a few years later, after both had returned to Israel, they got together with Amir, guitarist Uzi Finerman and bassist Tal Ronen and, with the heavyweight addition of Cohen, put out Exposure. That was followed, around three years later, by Optimistic View, with Hagai Cohen-Milo on bass, and with pianist Omri Mor and guitarist-oud player Amos Hoffman complementing the straightahead jazzy stuff with some sounds and rhythms from this part of the world. Nine or 10 years and all sorts of artistic ventures by the various band members later and New Directions came to being, this time with Tomer Bar and Gadi Lehavi splitting piano duties, Oded Meir on trombone and Assaf Hakimi on acoustic bass.Farber puts the band’s durability down to the consistent compositional thread that runs through the band’s work.“I think one of the main reasons why this band works is because I write music,” he declares. “We are constantly renewing. There is always new music coming out of us.”The evolutionary continuum is an encouraging and necessary element in artistic endeavor. It’s always good to know you are getting better at what you do. But it is equally satisfying when you can enjoy work you produced in times gone by. Farber says that applies to Hagiga, and that the band has gone a step further by actually feeding off some of their earlier efforts.“Recently, we have rediscovered the stuff we did on the first album. There’s a number called ‘Run Itzik Run!’ that’s really good.”Still, the constraints imposed by the realities of life, and the relatively sporadic nature of Hagiga’s confluences, can be a source of great frustration.“Sometimes I feel jealous of the Orchestra,” says Farber, referring to the big band fronted by veteran trombonist-composer Avi Lebovich, of which Farber is a member.“For the past 14 years they have been meeting, every Friday, to rehearse. I’d love to do that with Hagiga. Just imagine what we could achieve if we did that.”That may be a thorn in Farber’s side but he and his pals have done themselves proud with New Directions, which includes several contributions from Brazilian-born percussionist Joca Perpignan, and they should put on a class act next week in Tel Aviv, and in Copenhagen later in the summer.For tickets and more information: (054) 446- 7240 and http://haezor.com/en.