[Classical] Music to our ears

The Tel Aviv Museum of Art presents a plethora of concerts and musical events. 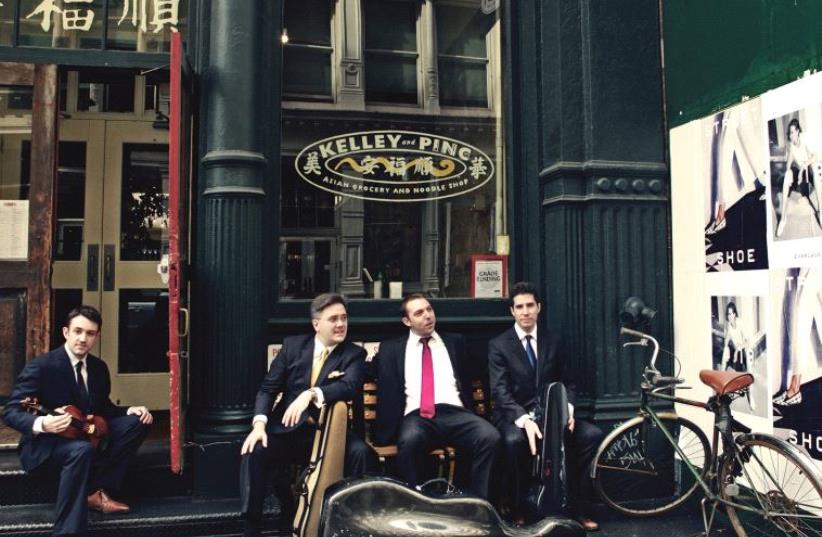 The Escher Quartet
(photo credit: PR)
Advertisement
Many museums have long stopped acting solely as repositories of works of art or artifacts of historical importance.Nowadays, such institutions also offer rich cultural consumeroriented programs that generally take in a wide array of musical entertainment.The Tel Aviv Museum of Art has been in on the extracurricular act for longer than most.“The chamber music concerts started around 1937, which makes the Tel Aviv Museum of Art the oldest concert series in the history of the State of Israel,” notes music director Ilan Rechtman, an internationally renowned pianist and composer.Rechtman, who has served as music director of the Tel Aviv Museum of Art’s Music Department for the past eight years, is at the helm of the upcoming classical music series, which starts on October 22 and runs until June of next year.During his term of office, he has proffered a wide range of works to the public, taking in perennial favorites alongside composers and works that may not be instantly recognizable to most.“Even in our regular Signature series of chamber music concerts, we often present ‘challenging’ programs, such as all-Bartok programs,” Rechtman says, adding that he and the museum are not looking to kick-start any revolutions.“We must try to cater to what the audience wants to hear, which is a lot of Beethoven, Schubert, Schumann, Brahms, Mendelssohn and Dvorak. I would say that these are the six most popular composers in our concerts.”At the end of the day, of course, you need to generate the requisite revenue.“We walk a fine line between entertaining the audience and educating them,” Rechtman continues. “If we go too much in the way of educating and challenging the audience, we often find that we sell much fewer tickets.”Rechtman points out that the museum works without a safety net.“The financial loss we experience is not compensated by any organization or government office.We pay the price for it by having a smaller budget to invite future artists, which is a shame,” he says.The music director would like to lay the groundwork at the earliest possible juncture of the future culture consumer’s life.“I should mention here that audiences need to be educated during their young and youngadult school years. Later, it’s much harder to accomplish. Since this is not happening in Israel of 2016, as the Israeli education system does not invest in music education, we have no choice but to keep relying on our older audience and be careful not to challenge the younger audience too much with anything too modern. Of course, I don’t mean the Contemporary concert series, which we present with the 21st Century Ensemble,” he says.Even so, the museum does put out its fair share of envelopepushing material.“These concerts present the most cutting-edge modern music, often very challenging, regardless of the -- usually not very big – number of people it attracts,” he adds.The museum, indeed, spreads its classical music wares across generous tracts of entertainment ground via a number of series classifications.“The Tel Aviv Museum of Art’s Music Department offers several concerts series,” Rechtman explains.“There is the orchestral, which is called Tempesta dei Solisti, or solanim be’seara [soloists in a storm], in Hebrew. There are also two Signature chamber music series, which are normal chamber music concerts, each one presenting usually seven concerts of classical, romantic and postromantic music for ensembles, ranging from trios to about 10 musicians.“There is a Baroque series, presented mostly through the Israel Barrocade ensemble, a series of contemporary music, presented mostly via the 21st Century Ensemble. And, finally, intimate, shorter concerts presented at the museum’s galleries, which are mostly recitals or smaller scale concerts,” he explains.The Tempesta dei Solisti series sounds like it is aiming to offer entertainment in a more alluring way. For his part, Rechtman says it is all about the content, not the packaging.“The Soloists series concentrates on bringing amazing virtuosos from around the world to perform great and exciting repertoires of wellknown, beloved concertos,” he says.The music director points out that the accent is very much on striking a balance between international stars from around the world and our own gifted performers.“In recent years, we managed to bring some very exciting artists. Some are Israelis living outside Israel, and some are artists from other countries. Many of them are young and energetic and very much in good form. It has been a very successful series for this reason, I believe,” he says.Rechtman and his team are also keen to make the music as userfriendly as possible. The Signature series concerts, for example, are preceded by a brief lecture on the works and composer in question.The series opens with the Aviv String Quartet performing works by Haydn, Shostakovich and Mozart, followed by the New York-based Escher String Quartet with a program of works by Schubert, Beethoven and Brahms, with regular violinist member Adam Boyd replaced by pianist Betarice Berrut. The New Yorkers will be back in December, but as a Berrutless trio, to perform Mozart’s Quartet No 22 in B Flat; Mendelssohn’s Quartet Op. 80; and Dvořák’s Quartet in G Major Op. 106.Meanwhile, the Tempesta dei Solisti series closes in May with a Japanese threesome of violinist Tamaki Kawakubo, pianist Akane Tokuoka and flutist Yasuka Nambu joining forces with Israeli bassoonist Mor Biron and the Israel Camerata Jerusalem conducted by Avner Biron. Their repertoire includes works by J.S. Bach, C.P.E. Bach, Mendelssohn and Vivaldi.The Ensemble Barrocade Series, which incorporates five concerts between November 23 and June 14, features works by Vivaldi, Handel, Charpentier, Ramirez and Telemann.The February 22 concert features irrepressible Estonian conductor Andres Mustonen presiding over the efforts of soprano Yeela Avital and alto Alon Harari, veteran comedian-actor Shlomo Baraba and the Estonian Chamber Choir Collegium Musicale.