The Samuel Torres Group will jazz it up in Tel Aviv and Zichron. 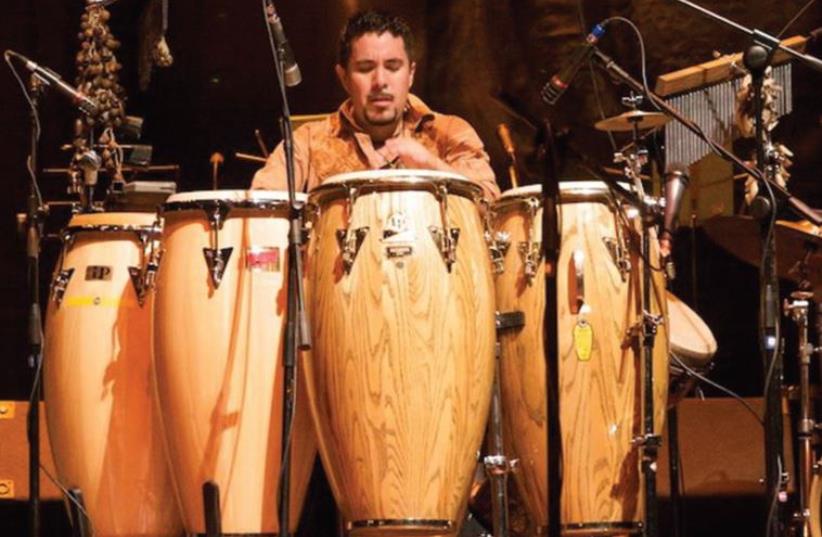 The Samuel Torres Group
(photo credit: PR)
Advertisement
Ever since the heady days of the Buena Vista Social Club some 15 years ago, the sounds of Latin America have rung out loud and clear across this land. Truth be told, Brazilian jazz and pop were pretty popular in Israel in the 1970s too, but the Cuban-fueled musical wave of popularity has been maintained for more than a decade and a half now.Of course, it helps to get some high-quality entertainment from the genre in question over here every so often, and the Elma Center in Zichron Ya’acov is doing its best to keep the Latin music flag flying high and proud. Next Friday (10 p.m.), the Samuel Torres Group will be in action, fronted by the eponymous Colombian-born, US-resident percussionist and composer. The Grammy Award recipient is bringing a couple of pals with him, in the form of compatriot vocalist Maria Raquel and Argentinean bassist-vocalist Fernando Knopf. The threesome will be complemented by a trio of local artists – saxophonist, clarinetist and flutist Gilad Ronen, pianist Gil Zohar and drummer Amir David.Torres, who turns 40 this year, has been in the business for some time now. He is a classically trained percussionist who began to develop an interest in Latin American material, jazz and other genres. His celebrated comrades in musical arms over the years include the likes of now Cuban trumpeter Arturo Sandoval, acclaimed jazz pianist-keyboardist Chick Corea, legendary American multi-instrumentalist Tito Puente, jazz saxophonist Michael Brecker and Mexican-American percussionist and singer Poncho Sanchez.This will not be Torres’s debut showing in Israel, having played at Caesarea in 2012 and at the Tel Aviv Jazz Festival the following year.“I had a good time on my previous visits to Israel,” says Torres. “I am excited to be coming back.”Traditionally in jazz, drummers, percussionists and bass players are generally perceived as back-of-thestage rhythm section players, and you rarely see them leading from the front. However, Torres’s chosen genre offers more opportunities for such artists to come to the front of the stage.“In Latin music, the most important musicians are percussionists. Think of Tito Puente. He was the first to put the timbales [drums] at the front of the bandstand,” Torres notes. “He was also an arranger and composer. He did all the phrasing on the timbales. And there were guys like [Grammy-winning percussionist] Ray Barretto. Now the band leader is also the one who writes the music.”Torres has no problem with the latter function.“That is something I have always been focused on. That, for me, is a very important stage in developing percussion,” he says, noting that the instrumental role of the writer leaves its stamp on the direction of the sonic raw material. “A percussionist composes in a different way from, for example, a pianist. As percussionists, we have a different way of approaching harmony. So I think it is very important for the music that percussionists do the writing.”The band leader got a well-rounded musical education in his early years, starting out in classical realms.“When I was growing up, there was no school that taught jazz or popular music in Bogotá. Now they have them,” he says.The youngster also managed to supplement his daytime training with handson education, playing salsa gigs at night.“These two worlds, of classical music and what you might call international music, complement each other. I learned a lot from the university of the street. I was very lucky to have those two worlds in my education,” he says.Torres’s “extracurricular” education does not appear to have done him any harm. And anyway, he had plenty of relevant grooves and sounds to feed off close to home.“My grandfather was a musician. He had an orchestra. My grandfather was a guitar player, and my two uncles went to the United States in the early 1960s and had amazing musical careers,” he says.Before departing for the US in 1999, the resourceful young artist had become an established figure on Colombia’s hectic music scene, backing leading Colombian performers while serving as an arranger and music director for his country’s highly regarded telenovelas and movies.Torres’s first Stateside port of call was Miami, where he found plenty of like-minded Cuban-born musicians to jam and perform with. These included Sandoval, who exerted a formative influence on the young musician’s artistic growth.Before long, Torres relocated to New York, the epicenter of the global Latin jazz scene.“I got to meet all my heroes there,” he says. “I was hanging out with Ray Barretto. He was one of my idols. That was fantastic for me.”Torres grabbed the opportunity to jam and perform with all kinds of acts with both capable hands and also fine-tuned his compositional skills.“The important thing in composition is finding your own voice,” he notes. “There are so many great musicians that influence you, but you have to find what you want to say. You have to be honest.”Over the years, Torres’s musical voice has developed different strands, which will be on display in Zichron Ya’acov next Friday, following his Wednesday show at Zappa Tel Aviv. The repertoire for the percussionist’s shows will come from the three CDs he has released to date, in addition to arrangements of traditional Colombian music.“There will be a lot of color,” Torres promises. “I like to have a lot of colors in my music.”

For tickets and more information: (04) 630- 0123; tickets@elmaarts.com.
Advertisement
Subscribe for our daily newsletter