The four-member, Leeds-based band, whose Israeli fan base seemed immeasurable in its size and enthusiasm, managed to imbue the outdoor arena with good feelings. 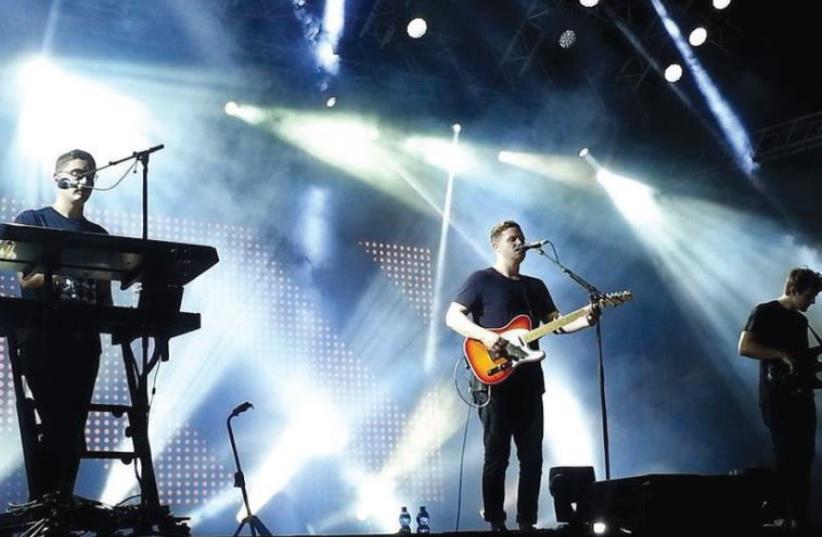 Alt-J perfroms at the Live Park in Rishon Lezion
(photo credit: ALT-J ISRAEL FANPAGE/FACEBOOK)
Advertisement
Occasionally a band can transform a massive group of strangers into a momentary community.That was the case last night at the Alt-J performance in Rishon LeZion’s Live Park. The British band, whose Israeli fan base seemed immeasurable in its size and enthusiasm, managed to imbue the outdoor arena with good feelings. The show was the perfect late summer engagement: crowded, hot, dancy and dynamic.Kicking off the show was the Israeli Electronic pop band Garden City Movement, which gave an impressive performance before Alt-J want on.They pumped up the crowd with up beat music and interesting video art effects.The four-member, Leeds-based band was meant to perform in Ra’anana, however shortly after tickets went on sale it became clear that the venue wasn’t going to cut it. Live Park was a great location for Alt-J, whose charmingly straightforward stage performance is best enjoyed when viewed head-on.The indie-rock band released two albums in the past three years, An Awesome Wave in 2012 and This Is All Yours in 2014, the former being the Israeli crowd favorite. The band is made up of singer and guitarist Joe Newman, guitar and bassist Gwil Sainsbury, keyboardist and singer Gus Unger-Hamilton and drummer Thom Green. Their sound, which seems to be influenced by hipster staples TV on the Radio and Radiohead, is distinct and refreshing.They have been making the rounds lately, playing to sold-out houses in London and New York. They are currently in the midst of a 43-concert international tour.The band was surprisingly dead-on live, effortlessly bringing the complex harmonies from their records to the stage.“We’ve never been to Israel before and to arrive and see that we have such great fans, like you, is amazing,” beamed front man Joe Newman to a sea of smiling faces.After playing the majority of their repertoire which included “Dissolve Me” “Matilda,” “Left Hand Free” and “Hunger of the Pine”, the band said goodnight only to return for a threesong encore. They closed with “Breezeblocks,” the track that has received the most local radio traction.“This has been a great first time in Israel,” Newman said at the end of the show. “Than you so much, and we’ll see you again!” The crowd warmly applauded and happily trudged through the dust back to their cars, where they spent the better part of an hour locked in a traffic jam on the way to the highway. The show was great fun, low on drama and high on fantastic beats and good vibes.