Cooking: The spirit of Veneto 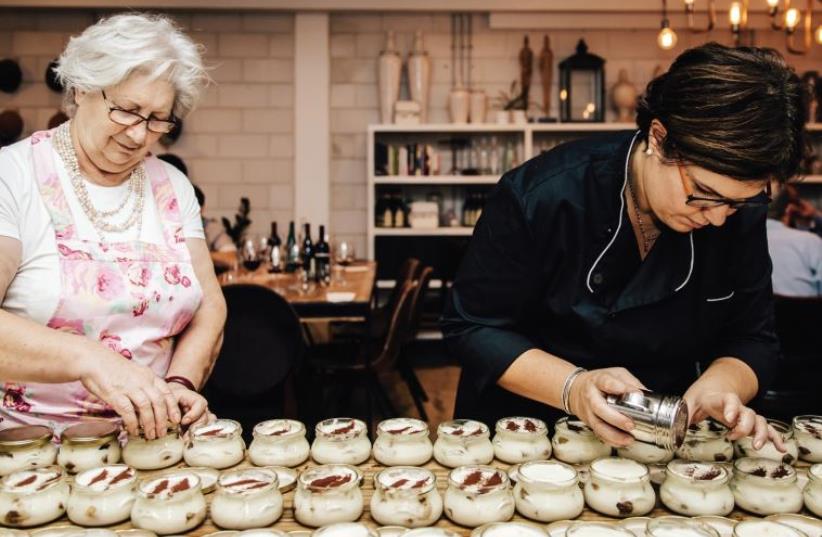 Two Italian cooks, a mother and daughter, brought their age old traditions to Tel Aviv
(photo credit: MATAN KATZ)
Advertisement
Northern Italian traditional cuisine is hearty, and naturally so are the wines that come from that part of the world, produced aound the foothills of the Alps.Valpolicella is a light wine but it is the basis for bolder reds. it is fagrant, dry, crisp red wine with tart cherry flavors, and is made in Veneto from Corvina, Rondinella and Molinara, like most of the local wines.After the harvest for Valpolicella, pickers leave some of the best grapes on the vine until they’re so ripe that they start to shrivel.Then they’re picked and spread out on bamboo mats in drying houses to dry and shrivel for another three months. This turns them almost into raisins, further concentrating their sugars and acids. The resulting wine, called Amarone della Valpolicella, can contain up to 15% alcohol. Veneto’s winemakers make a third style of red wine from the same trio of grapes. Valpolicella Ripasso is a medium-bodied red wine created by taking Valpolicella wine and “re-passing” it for a week or so over the grape skins left from just having made Amarone.At a recent dinner hosted by wine importers France-Israel, the guests had the opportunity to sip wines from Veneto with the traditional food cooked by the locals. Two representatives of Veneto regional cuisine, Giorgia Cancian and her mother, Maria Rosa Guglielmini, were invited to cook there, courtesy of Masi Agricola Winery, one of the most important wineries in Italy and leading winery of the region. The lovely duo, assisted by local chefs, served dishes that were typical of their local cuisine.The history of the Guglielmini family started in the 1930s when the grandmother, Mirta, widowed in the war, moved with her daughter to an inn in Veneto run by her aunt and started cooking. She turned out to be very talented. After falling in love with a local waiter, the couple opened a small restaurant in a nearby village. Their daughters joined the family business and the restaurant, which still serves local dishes, continues to attract locals, as well as international celebrities.Masi winery and vineyards, located in the Valpolicella region in Veneto, near Verona, has been producing wine since the 18th century. Principally using native grapes and indigenous methods for the Venetian territories, Masi makes what Sandro Boscaini, the guiding light in the company, calls “modern wines with an ancient heart,” using constantly updated technology.Today, Masi is a leader in the production of Amarone and has acknowledged expertise in the Appassimento technique. The name of the winery is derived from Vaio dei Masi, the small valley in Valpolicella acquired by the Boscaini family, who are still its owners.The Masi wines served at the dinner Rosa dei Masi was served as an aperitif. A fresh and fruity rosé, it is also complex and elegant, thanks to the use of Masi’s Appassimento technique.The Masi Bonacosta Valpolicella was served with a hearty bean soup scented with rosemary. Light, fruity and crisp, the wine has a floral aroma, with flavors of tart cherries and chocolate.For the next course, Venetian duck with handmade tagliatelle pasta was served with Masi Campofiorin, a smooth, full-bodied and velvety red wine. Internationally recognized as a wine of “stupendous body and complexity,” it is the original Supervenetian created by Masi in 1964. Its production method was described by wine expert Hugh Johnson as “an ingenious technique.”A beef stew cooked in Amarone was served with the region’s queen of wines – the Amarone Classico. A proud, majestic, complex and exuberant wine, Masi calls it their “gentle giant.” It is the product of Masi’s unrivaled expertise in the Appassimento technique, whereby traditional grapes for the Valpolicella Classica area – Corvina, Rondinella and Molinara – are laid out on bamboo racks to concentrate their aromas during the winter months.Dessert was accompanied by Masi’s Grappa and their dessert wine, Casal Deu Ronchi Recioto, which comes from the ancient Casal dei Ronchi vineyard on the Possessioni Serego Alighieri estate. Magnifico! ■ The writer was a guest of Masi and France-Israel wine importers. Masi wines are not kosher.