Creating change on and off the mat 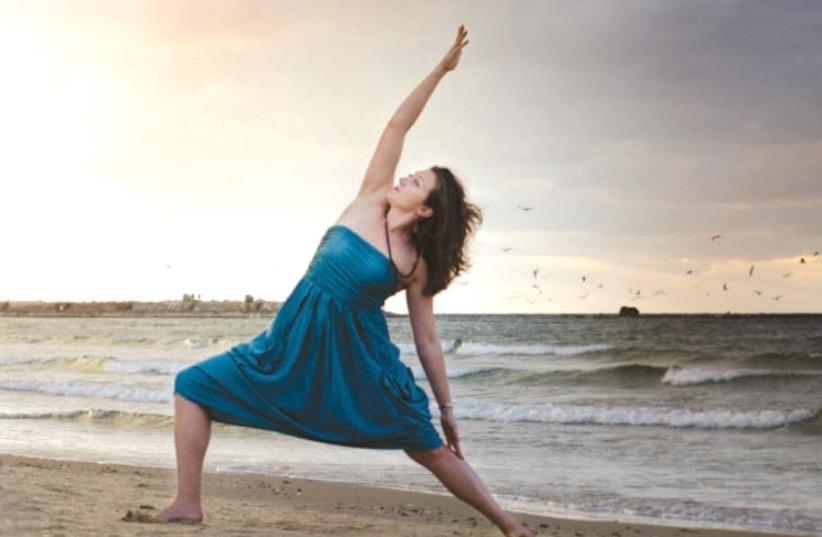 ‘WHEN YOU have freedom, you can give freedom to people. When you hurt, you will hurt people. I’m excited about connecting with Israelis in the yoga community,’ says American Palestinian yoga teacher Jennifer Atala
(photo credit: JENNY HYMAN PHOTOS)
Advertisement
In this part of the world, the word “occupation” is used often. We hear it on the news, in conversation, see it in the paper and on Facebook. A very big word and a very heated topic, “the occupation” is an umbrella term for a host of actions. In Jennifer Atala’s eyes, it is also an incredibly personal and painful notion, one with deep implications for those involved. In her classes, the Palestinian-American yoga teacher and business coach uses the ancient Indian practices of movement, breath and meditation to give people useful tools to cope with the tensions caused by the occupation.“Everyone in this space is living with different types of trauma and the nervous system is really affected by this,” explains Atala via a Skype call. Atala, 37, had just arrived in Ramallah from Haifa, the two cities she is currently splitting her time between. In Haifa, she is surrounded by throngs of extended family. In Ramallah, she has her home studio and work base. She speaks passionately and with great clarity about her upbringing, her life, work and her perspective on the region.“Whether it’s that your neighbor had a night raid or seeing soldiers walking down your street, everyone is affected deeply by this conflict. The type of yoga practice that is important for Palestinians is centered around breath work, meditation, mindfulness and using asanas [yoga poses or postures] to deal with the effects of the occupation on one’s system.”This weekend, Atala will teach yoga as part of the second annual International Yoga Festival in Gan Hashlosha. The festival, which brings together many different teachers and types of yoga practice, goes far beyond yoga practice to get in shape or gain flexibility, delving deep into the endless benefits of engaging with yoga in modern life. Atala will be teaching together with Jamey Marks, a Jewish American who teaches open classes in Tel Aviv as well as working with Palestinian children in Hebron and Beit Ummar.“I got brought into the festival because of Jamey,” explains Atala. “He and I met when I was living in Tel Aviv with a group of social justice-oriented yoga teachers. I was brought in as the only Palestinian yoga teacher that people knew. That’s how we met and we became very good friends. He said, ‘hey, do a workshop with me and talk about what it means to teach in Palestine on some level.’ So, we are doing this together. Part of what makes it really interesting as part of the festival is that we are a Palestinian and a Jew. That, in and of itself, is something. It’s interesting to see us teaching together because of our relationship.”The two will guide participants through meditation, asanas and prana yama (breath practice) as well as a satsung (spiritual discourse).What Atala hopes to provide her students with is the ability to foster “spaciousness.”“Spaciousness feels like being able to be in a conversation with someone that might come from a perspective that might seem to be the antithesis of who you are and not have your heart start beating really fast. To remain calm and not listen to find ways to argue with them but to really listen and understand and to be open who they might be. When it comes to this conflict, we come in with our sleeves rolled up and our fists bunched and ready to go. It doesn’t mean that you are going to be best friends or that they’re a good person. There’s some freedom in that. When you have freedom, you can give freedom to people. When you hurt, you will hurt people. I’m excited about connecting with Israelis in the yoga community. The yoga community can be so powerful.”The International Yoga Festival will take place on May 11-13 at Gan Hashlosha. For more information, visit www.yogafestival.co.il.