The Neveh Tzedek restaurant celebrates So French, So Good. 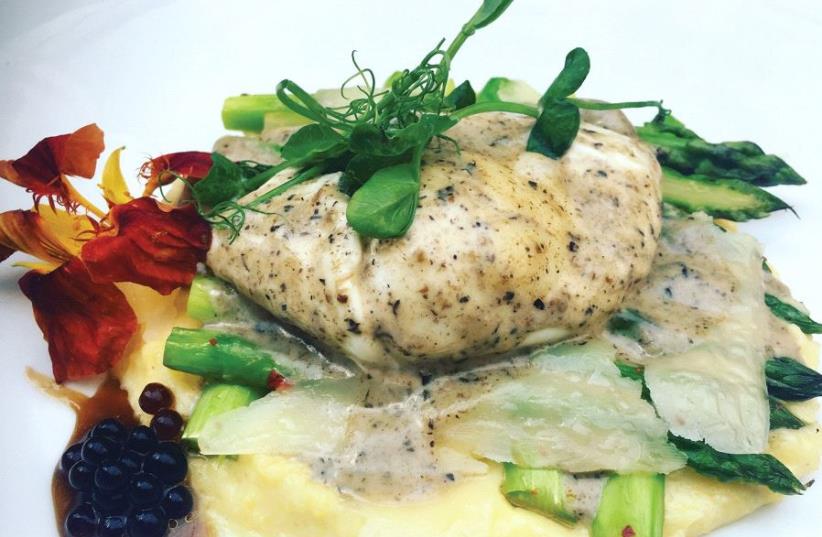 Dallal restaurant
(photo credit: PR)
Advertisement
The annual So French, So Food festival sponsored by the embassy of France in Israel was held last week, with 22 visiting chefs from France fanning across the country, giving master classes and collaborating with Israeli chefs and bakers to provide unforgettable gastronomic experiences to the public, in big cities and the periphery alike. Among the 18 Israeli restaurants participating in this year’s culinary endeavor was Dallal, whose resident chef Golan Gurfinkel hosted chef Julien Binz, owner of the restaurant in Alsace that bears his name, which earned a coveted Michelin star in its first year of operation. The menu devised by Gurfinkel and Binz comprised six appetizers and six main courses. Each chef prepared three appetizers, while two of the entrées were Binz creations.Since Restaurant Julien Binz is known for gourmet vegetarian food, there were also vegetarian options in each category.The very professional Dallal wait staff had clearly been briefed on the dishes in the special menu, and we were happy to follow our waiter’s recommendations, especially since they coincided with what we would have chosen anyway.Our first starter was the blue crab wrapped in daikon radish (NIS 72) – three rolls of sweet crab meat enveloped by radish sliced so razor thin that it could be rolled into cylinders. The filling of delicate white crab meat was seasoned so subtly that it seemed like the pleasing taste melded into the sensation of aroma.Blue crab is not a staple on Israeli menus, so I try to order it whenever I come across it; and I can state unequivocally that it was the best crab dish I’ve had in this country.Our next outstanding starter was the green asparagus with poached free-range egg, beurre noisette and truffles (NIS 64). The perfectly cooked al dente vegetable spears were bathed in frothy butter flavored with a hint of truffle. The combination of soft egg yolk with the sauce that had all the taste of butter without any of its overpowering richness resulted in the perfect balance to enhance the exceedingly fresh asparagus. Rarely do such simple ingredients come together to add up to such a sublime dish.I had not intended to order any bread with the meal, but I had to order some to mop up every last drop of that divine mixture.Fortuitously, both starters were the creations of the maître de cuisine française Binz, as was one of the main courses we ordered: the lamb chops in lamb stock with cumin (NIS 190). The three relatively thick chops were cooked sous vide, so they came out red through and through, as well as juicy and succulent, albeit tasting very different from the commonly grilled lamb chops we know and love in the Middle East.The lamb chops were accompanied by ravioli that had been flash-fried to a crispy exterior and oozed the pasta’s filling of zesty goat cheese.Our second entrée was Dallal’s own Moulard duck breast in duck jus, with carrot cream and herb salad (NIS 152). The melt-in-themouth duck was every bit as delicious as the dish of Gurfinkel’s Michelin-starred counterpart, with the advantage that it will be available even after the distinguished visitor takes his leave.Only one dessert was courtesy of Binz: caramel and chocolate délice (NIS 52), a layer of chocolate mousse topped with dollops of bittersweet ganache and a tuile of salted caramel. Accompanied by peanut butter ice cream and peanut pralines, this was the perfect sweet ending to a memorable meal.Interestingly, although French wines were available, they were not highlighted. In fact, the knowledgeable manager recommended an Israeli wine: an excellent Cabernet Sauvignon by Clos de Gat that paired well with both the duck and the lamb chops.What was French among the beverages were special cocktails based on Courvoisier VS. The three colors cocktail was made with Courvoisier, triple sec, pineapple syrup, lemon and orange sections.Served in a snifter with lots of ice and a large sprig of mint dusted with powdered sugar, it was bracingly refreshing.Finally, it might be heartening to note that while a So French, So Food experience is a bit of a splurge, a three-course Michelin-star meal could have been enjoyed at Dallal for a hardly exorbitant NIS 188.The writer was a guest of the restaurant.Dallal Not kosher 10 Shabazi St., Tel Aviv Tel: (03) 510-9292