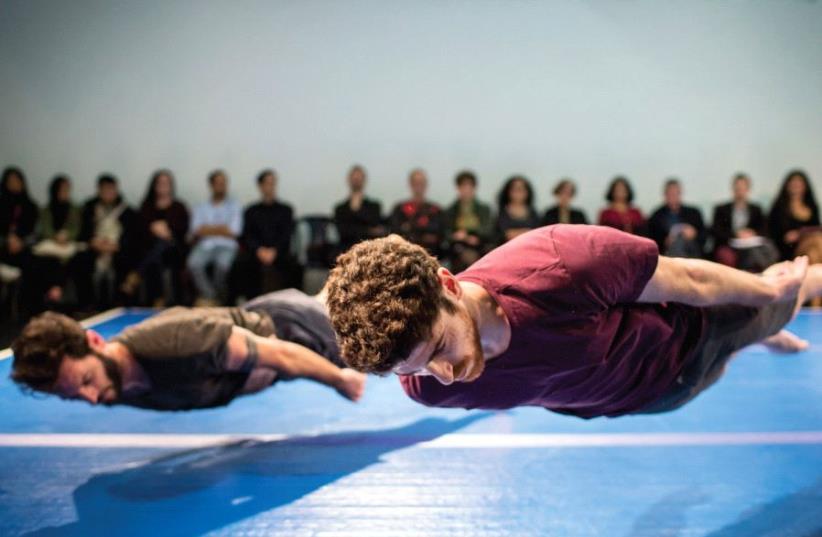 Batsheva’s 'Gravitas'
(photo credit: VOJTÊCH BRTNICKÝ)
Advertisement
In New York City, if you want to open your own restaurant, one of the best ways to do it is to work for an experienced restaurateur. A perfect example of this is Keith McNally, owner of a handful of Manhattan’s most famous eateries and the family tree of restaurants opened by his former employees. Somehow, through working for McNally, budding restaurateurs receive a topnotch education in the business.The same can be said for choreographers and the Batsheva Dance Company. Over the past many years, veterans of the Tel Aviv-based troupe have risen to dance fame and prowess, having learned the tricks of the trade in the studios of the company’s home in the Suzanne Dellal Center. These artists spring forward out of the “Arab Line” (from Naharin’s Virus) and into the contemporary dance scene with fresh perspective and deft movement.While this phenomenon has been largely acknowledged by the local dance community, it has never been made official until now. This month, as part of the ongoing Batsheva Hosts series, the company will host a small festival called Latitude, curated by longtime Ensemble rehearsal director Hillel Kogan. The festival will include three programs: Rising by Shira Eviatar with Ofir Yudilevich’s Gravitas; Nataly Zukerman’s The Other Body; and a mixed program of former Batsheva dancers titled Exit.“The idea of Batsheva Hosts has always been to open the doors,” explains Kogan over Skype. Wearing a sweatshirt and seated at the desk of his Lieusaint hotel room in France, he is about to perform his duet We Love Arabs. Amidst a whirling tour schedule of the work, which includes stops in France, Italy and Tahiti, Kogan found time to program Latitude.“Batsheva is a company with a lot of power and status in the public, which is not just expressed in the fact that it’s a financially stable company, but that people also trust Batsheva’s taste that the company sets the tone. Because there’s a house choreographer and most of the creations of the company are by Ohad Naharin, there isn’t a lot of space for outside choreographers to come (apart from Sharon Eyal, Danielle Agami, Hofesh Shechter and Roy Assaf). This is a chance to offer something that isn’t Batsheva, that is not the same thing,” he says.Having worked for Batsheva for more than a decade, Kogan can effortlessly tune in to the frequency of the company. As the new artistic director of Batsheva Hosts, he can challenge and treat the audience to works they would otherwise not be exposed to.“There are choreographers like Yasmeen Godder with Climax, Yonatan Levy and Nataly Zukerman that have and will present work in Batsheva Hosts. It isn’t limited to dance. I want to take the body and performing arts as an anchor but also to leave the option open to host a music show. It is a platform for all performing arts. I want to bring shows whose approach to the body make an interesting dialogue with the approach to the body in Batsheva, like Zukerman’s The Other Body. Aside from thinking it’s great, I think it suits this very mainstream and esteemed stage. To ask the audience to have a dialogue with what they’re used to, the very advanced virtuosic bodies of Batsheva, as well as with other bodies. To find the humanity and poetry in all of them,” he explains.Exit, which will feature works by Yossi Berg and Oded Graf, Matan Daskal, Bosmat Nossan, Guy Shomroni and Yaniv Avraham and Adi Salant, is a natural extension of Batsheva’s established activities in Kogan’s eyes.“We have created a lot of family ties here to artists like Noa Zuk, Bosmat Nossan, Shamel Pitts, Shahar Binyamini and Bobbi Smith. This platform allows for the loyal audience, who are interested in seeing what happened with them after the company, to catch up with them because it’s not always easy to find them. A lot of them, like Shamel, perform in niches or in unconventional spaces. You need to know how to find them. The program, as I see it, wants to give a continuation to dancers who worked with Batsheva and are on a path on their own. Batsheva wants to hug them, to put them under the umbrella of Batsheva Hosts. To help them to promote themselves,” he says.As for future events, Kogan keeps things vague. With the two active companies – the main troupe and the Ensemble – Batsheva’s studios are full most days of the year. Latitude was made possible by a fortuitous crossing of two tour schedules, a coincidence that won’t repeat for a few more months.“It’s very hard for these things to live together under the same roof because of Batsheva’s very tight schedule. Because of the renovations at Suzanne Dellal, there are only two studios available now instead of three. We need to take advantage of the company’s being abroad to host. We can’t do more than seven or eight events a year,” he says.Even so, with the current crisis of performance spaces (Yaron Yerushalmi Hall is under construction, the Bikurei Ha’itim Center recently closed as did Jaffa’s Warehouse 2), Batsheva Hosts provides a vital and welcome outlet for local choreographers to strut their stuff.Latitude will run from February 12 to 15 at the Suzanne Dellal Center in Tel Aviv. For more information, visit www.batsheva.co.il.