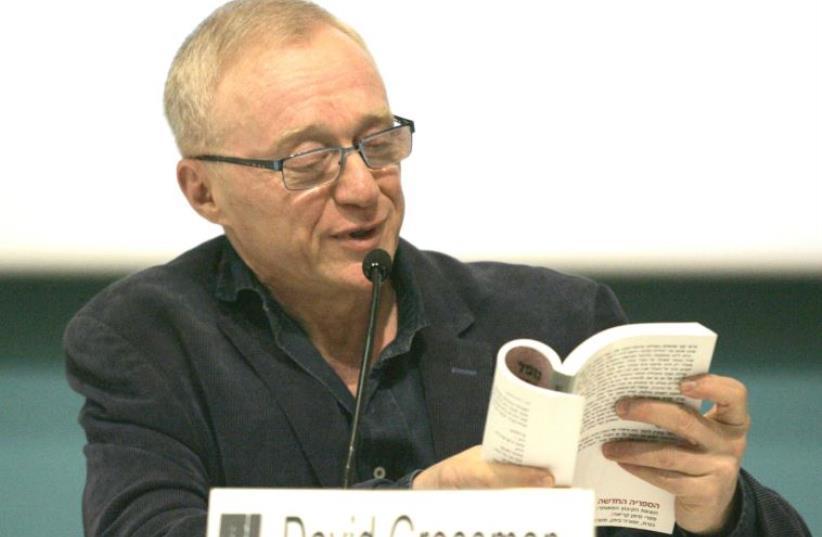 Novelist David Grossman
(photo credit: REUTERS)
Advertisement
Israeli author David Grossman has been awarded the prestigious Man Booker International Prize award in London.Grossman beat out fellow Israeli writer Amos Oz, as well as four others shortlisted for the award, for his recent work A Horse Walks Into a Bar. The book revolves around Dovaleh Greenstein, who wanders into a dive bar one night to perform a stand-up routine and reveals the traumatic childhood moment that changed him forever.While accepting the award at the ceremony on Wednesday night, Grossman expressed his delight that not one but two Israeli writers made the shortlist.“It’s a great sign of honor to our language, which is a very insular language, he said. “And yet, since it was a dormant language for something like 1,800 years, it is such a phenomenon that in the last 120 years the Hebrew language has been revitalized, awakened from its long sleep and became a language of every day.”Grossman and his translator, Jessica Cohen, will receive a £50,000 prize to split between them.Grossman thanked his family, friends and of course Cohen, and paid tribute to Oz as well.“Amos is my friend and my teacher and it’s very meaningful to be on the same list as him,” he said. Grossman said that with the revitalization of Hebrew, writers worked “so hard to bring this language to life and to start to tell stories in Hebrew. Today we have such a flourishing and really wonderful literature,” he added. “There are so many wonderful, wonderful writers in Israel that deserve to be translated and to be read.”Oz, who was shortlisted in 2007 but lost then too, was nominated for his book Judas.Nick Barley, chairman of the 2017 judging panel, said they were “bowled over by Grossman’s willingness to take emotional as well as stylistic risks: Every sentence counts, every word matters in this supreme example of the writer’s craft.”The prestigious Man Booker Award has been presented since the 1960s and the International Prize since 2005. The International Prize is awarded for an English translation of a book by a living author of any nationality.Last year, The Jerusalem Post reviewed the translation of A Horse Walks into a Bar saying: “In little more than 200 pages, Grossman brings us to the nerve center of his psyche.”Israeli politicians from across the political spectrum praised Grossman’s triumph.Minister of Culture and Sport Miri Regev dubbed Grossman a “winning horse” in the national and international culture and literature arenas.Education Minister Naftali Bennett tweeted that Grossman brought great honor to the State of Israel.Former defense minister Moshe Ya’alon tweeted that Grossman’s work is a source of national pride, and from now on, world too.Opposition chairman Isaac Herzog also took Twitter to praise Grossman saying, “His voice and his pen are clear and piercing, leaving a great mark.”The other finalists for the prize this year were Mathias Enard of France for Compass; Roy Jacobsen of Norway for The Unseen; Dorthe Nors of Denmark for Mirror, Shoulder, Signal; and Samanta Schweblin of Argentina for Fever Dream.Oz and Grossman are two of Israel’s most famed and acclaimed authors.Grossman has won the Sapir, Bialik and Emet prizes.His 2008 novel, To The End of the Land, was translated into many languages and his 2000 work, Someone to Run With, was the basis for an Israeli thriller movie.