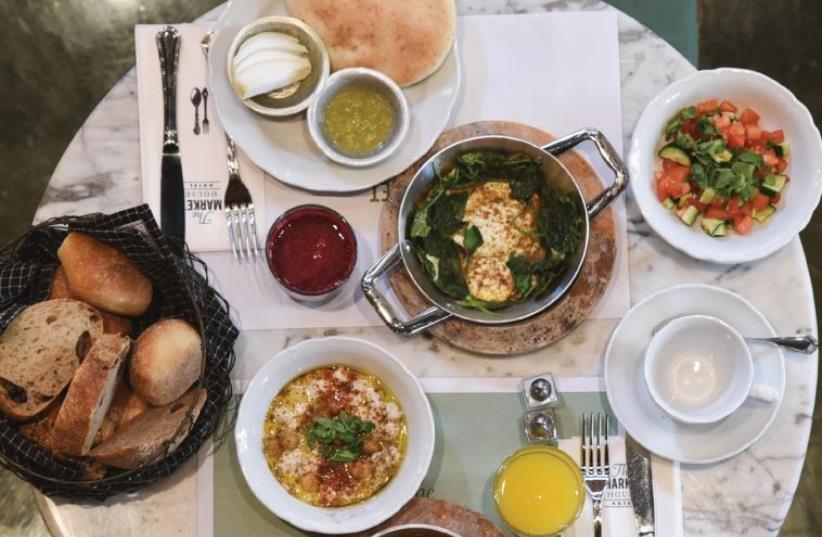 Jaffa’s Market House Hotel
(photo credit: PR)
Advertisement
The upscale Atlas boutique hotel chain boasts one property in Jaffa, the Market House Hotel, on the fringe of the Flea Market. The expertly refurbished building was built on the ruins of a Byzantine chapel, which can be viewed through the lobby’s glass floor. Twice a day, for breakfast and a light dinner, part of the lobby is transformed into a dining room, which from 7 a.m. to noon is accessible to anyone who wants to partake of the hotel’s morning buffet.What was impressive about the breakfast buffet was not its size, since at first glance it looked quite small, but the amount of food that could end up on your plate in an endless procession from the limited display area to your table. And this all-you-caneat feast is priced at NIS 80 per person.It doesn’t take long to scope out the entire buffet, but it is definitely worthwhile investing a minute or two surveying it all before digging in. For example, we only discovered the hot food buffet – featuring flaky cheese and spinach burekas – after filling our plates as a result of making a first pass at two groaning sideboards.The first thing that caught our eye on the buffet were the breads, thanks to French baguettes standing tall in their container. They marked the spot for an array of fresh, crusty breads that included a rustic round loaf, one studded with black olives, and a basket of ciabatta rolls, including multigrain seeded rolls. According to the hotel manager, the breads come from the supply bakery Lahma, which delivers the breads 90 percent frozen, so they can be warmed up and taste like justbaked even on Shabbat morning, despite kashrut restrictions.The breads were excellent with the cream cheese and smoked salmon, as well as with the pink Matjes herring, but especially the cheeses: Camembert, Manchego, St. Maure and one veined with red wine. For a sweet change of pace, there were several premium jams and jellies.Breakfast at the Market House also included special dishes ordered from the kitchen: red or green shakshouka, eggs made to order, and – in a nod to the neighborhood – hummus. The latter was served warm and soupy, with its own fresh pita, although the less conventional olive bread is great for wiping the hummus plate clean.The green shakshouka was more like eggs Florentine: fried eggs with large leaves of cooked fresh spinach and a few sprigs of coriander. In the case of this particular dish, the lack of sauce was no drawback.The red shakshouka, on the other hand, consisted of two poached eggs swimming in sauce that had precious little of the chopped tomatoes, onions or peppers characteristic of this dish.Both shakshoukas were served piping hot in individual skillets.There were some healthy alternatives as well. The hot buffet offered a pot of thick oatmeal, which could be topped with almonds, walnuts, raisins and dried cranberries. More healthy choices were muesli, yogurt, assorted fresh fruit and, unusually, chia seeds for sprinkling on the porridge or muesli.Rounding out the healthy choices were hearty salads: cucumber and tomatoes, tabouleh with lentils, eggplant, and fava beans.There were, of course, juices as well. The orange juice was not freshly squeezed, but the carrot and beet juices were clearly freshly made. And the coffee was first rate.There were not a lot of desserts, but certainly enough to keep things interesting. There were four kinds of halva, while chocolate croissants and other pastries were brought in from the highly regarded Milk Bakery next door. But the standout was the homemade cheesecake, which tasted remarkably like the Philadelphia brand cream cheese cake I remember from my youth.Needless to say, there is no shortage of restaurants in this area of Jaffa, but the Market House is hoping that its breakfast can attract people who might want to fuel up before a day of browsing in the Flea Market. Not a bad idea at all.