Dining: Brunch around the clock 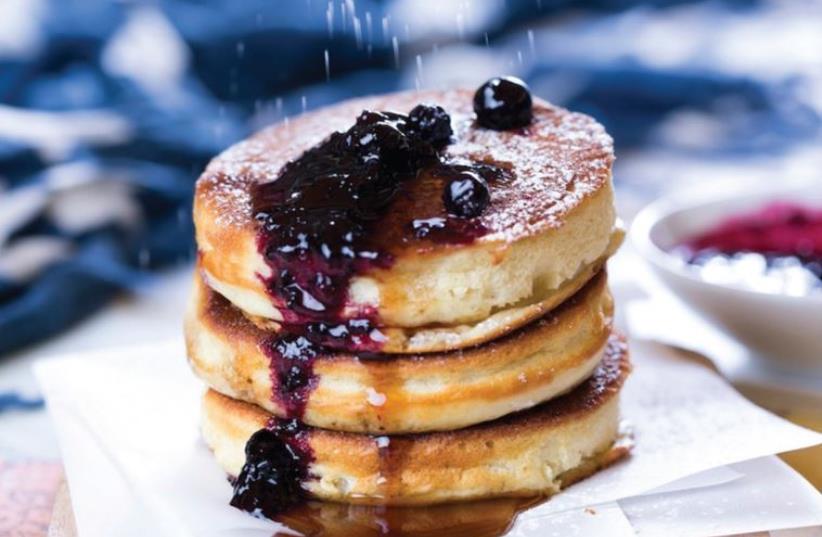 Benedict
(photo credit: PR)
Advertisement
For a decade now, the Benedict brand has been carving out a respectable niche in the greater metropolitan Tel Aviv restaurant market, starting in the heart of the big city and expanding northward to Herzliya and southward to Rishon Lezion. The latest franchise has just opened in Kfar Saba, and it replicates the small chain’s winning formula: serving tempting dishes suitable for eating morning, noon or night.The restaurant’s creativity begins with the list of brunch cocktails: five varieties of mimosa and six other mixed drinks. The alcohol menu – available in multiple languages, like the food and dessert menus – also opens a window on Benedict’s reasonable prices. The most expensive are NIS 29, about the lowest price for a cocktail I’ve seen in the country. A complimentary mimosa (or a premium cocktail for NIS 9) is included with the order of certain brunch dishes.Probably the best bargain for a couple, however, is the Benedict champagne: a bottle of Brut Cava, served with carafes of peach, pineapple and orange juice. It’s like mix ‘n’ match make-your-ownmimosa.And the bottle stays in a bucket on the table – all for NIS 69.In addition, many of the main dishes on the menu come with Benedict’s unlimited basket of breads – actually, soft rolls – comprising four varieties: pumpkin (with a distinctive cornflour crust), multi-grain (studded with seeds), brioche and ciabatta. The excellent fresh rolls are served with butter, Nutella and fruit jam. It takes a great deal of restraint not to fill up on these.The Small Plates section on the menu features an appetizer intriguingly named Tower of Babel (NIS 19), which is Benedict’s unique take on sabich: slices of fried eggplant and grilled tomato sandwiched between layers of potato fritters, and the entire stack is topped with crumbled hard-boiled egg and drizzled with a bold tahini-cum-amba sauce. The interplay of all these flavors is terrific, and the sauce unforgettable.Next time, I’ll try to remember to ask if I can buy a bottle of the sauce to take home.Our second appetizer was the charcuterie (NIS 17), a choice of frankfurter or chorizo. The menu does not specify the kind of meat in each sausage, but the frankfurter is pork, while the chorizo is beef. The latter was not as spicy as most Mexican versions, but it was still nicely seasoned. It was served with a Dijon mustard that was far superior to anything you’re likely to find in a store.One of Benedict’s signature main courses is egg balls – scrambled eggs formed into round dumplings and served in a choice of several enticing sauces. We chose the egg balls with shrimp and diced tomato in a butter, garlic and white wine sauce. It was an extremely rich concoction that complemented the eggy spheres nicely and was made to be mopped up with the delicious rolls from the bottomless basket.Since we had enjoyed the Benedict variation on one Israeli classic, we decided to go that route again and try the Amatriciana: shakshouka with an Italian accent, if you will. Imagine a perfectly seasoned pizza sauce with egg, bacon and Gouda and Parmesan cheeses, served piping hot in a skillet, and you’ll have a good idea of the kind of treat you’d be in for. Once again, those never-ending rolls came in handy to sop up every last drop of that exceptional sauce, although the dish also came with a side of excellent pesto.The desserts included options that also exist as main courses: pancakes (or mini-pancakes) and French toast.While we were pondering the pancake selections, our waiter recommended another Benedict house specialty: the pancakes with white chocolate and espresso (NIS 24/41). The tall stack of pancakes were topped with white chocolate chips, and a small carafe of espresso was served alongside. When I poured the hot coffee over the whole lot, the chocolate melted, and the mocha combination was absorbed into the thick, fluffy creations. The experience was fun and memorable, and the taste out of this world.Yet another Benedict exclusive was to come. The pastry called brioche rose (NIS 12) was a sweet roll shaped like a flowering rose, with doughy “petals” that could be peeled off. This yeasty delight melted in the mouth, with a sprinkling of almonds adding a welcome bit of crunch.Both desserts went nicely with a brand of coffee that is not available anywhere else in Israel, not even other Benedict outlets. Cafe Diem is being tested as a pilot in the Kfar Saba branch. Our very pleasant cappuccino (NIS 11/13) was a bold roast with a mellow finish.Benedict’s slogan is “All about breakfast” – and clearly all about quality, at all hours of the day and night. One of the chain’s claims to fame is being open 24/7, and the branch in Kfar Saba is poised to follow suit when the weather warms up a bit more. In the meantime, it is open seven days a week until midnight. The good news is that it’s already got the food part down pat.

The writer was a guest of the restaurant.Benedict
Not kosher
G Shopping Mall, Kfar Saba
Tel: (03) 686-8657, ext. 6
Advertisement
Subscribe for our daily newsletter