Herbert Samuel Herzliya has a European ambience and a distinctive flavor. 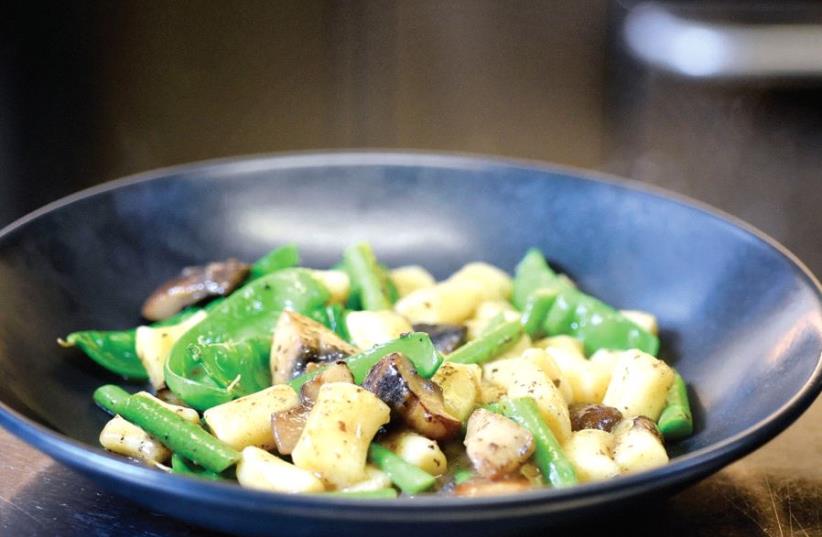 Herbert Samuel Herzliya
(photo credit: PR)
Advertisement
For its signature five-star restaurant, the Ritz-Carlton Hotel in Herzliya chose to name it after Herbert Samuel, the British minister who became the high commissioner for Palestine in 1920.There is certainly a European ambience in the Herbert Samuel Herzliya, with tables separated by louvered walls, allowing people privacy yet without the feeling of being isolated. It also has a youthful feel to it, the décor is light and airy, and it is clearly a popular choice for all the hi-techies working in the area.Wine bottles, laid horizontally in glass-fronted wall cabinets, provide an original decoration.The staff are young, enthusiastic and helpful, all dressed in long white aprons over beige jeans.When we arrived to sample the food and wine recently, the evening was greatly enhanced by the excellent and friendly service, the perfect lighting, and the view of the marina below our window.No sooner had we sat down at our table than a basket of bread appeared, whole meal chunks with a very thick crust studded with nuts and seeds. It came with a plate of mashwaya (roasted peppers) – good and peppery – and the ubiquitous olive oil and balsamic mix.We asked our waitress, Chen, to bring anything the chef wanted us to taste, as we weren’t fussy. This was a mistake, as large quantities of food arrived, and it all had to be tasted.Four starters arrived at our table.The salmon sashimi (NIS 42) was made from very fresh raw salmon, diced and dressed with quantities of dill and a lemony sauce. The tuna, also raw, had a sweet and sour dressing and was accompanied by crunchy seaweed (NIS 44). The tomato salad combined several varieties of the vegetable with chili pepper, some sliced radish and a spicy vinaigrette (NIS 38). And artichoke hearts in aioli gave an explosion of flavors to the taste buds (NIS 36).All were as good as they sound.A soup course followed – a creamy mushroom served in minicasseroles (NIS 42). Of course it was parve, and the chef had managed to mask the lack of real cream with a generous helping of oregano.We were treated to four main courses between the two of us.The first was a piece of wild sea bass, oven-baked so it was not at all greasy, and garnished with a rare sight in Israel – a piece of fresh and pungent watercress.The next main course was a bowl of gnocchi, garnished with snow peas, truffles and asparagus.Gnocchi is not one of my favorite dishes, as it is often stodgy, but this was delicious and irresistible.Before the next two main courses, we were delighted to have a visit from the chef, Mor Cohen, who has been at the Herbert Samuel for 10 months.“I try to put the emphasis on local ingredients,” he says.He has found creative ways of compensating for not being able to use butter and cream in his cuisine.“I use pine nuts and almonds to make my own ‘butter,’” he explains.He also concocts his own Japanese spice mixtures such as shichimi and togarashi. Unusually for an Israeli chef, he is 100% Ashkenazi.The next two main courses were grilled lamb chops with roasted fennel (NIS 194) and beef fillet in a rich wine sauce (NIS 62 for 100 grams). They were both superb.The desserts were quite original and light, which we felt was necessary after so much savory food. We tried the crunchy Valrhona chocolate bar with hazelnut ice cream (NIS 48) and the almond pannacotta (made with coconut cream) and mango sorbet. Both were excellent and not overly sweet.A final mint tea to help digest the rather large quantity of food that was consumed ended what had been an outstanding meal.The writer was a guest of the restaurant.Herbert Samuel HerzliyaKosher Ritz-Carlton Hotel 4 Hashunit St., Herzliya Pituah Tel: 073-203-7596 Weekdays 12:30 p.m. to 3:30 p.m. and 6:30 p.m. 11 p.m.