The Hod Hasharon restaurant Dagim has reinvented itself 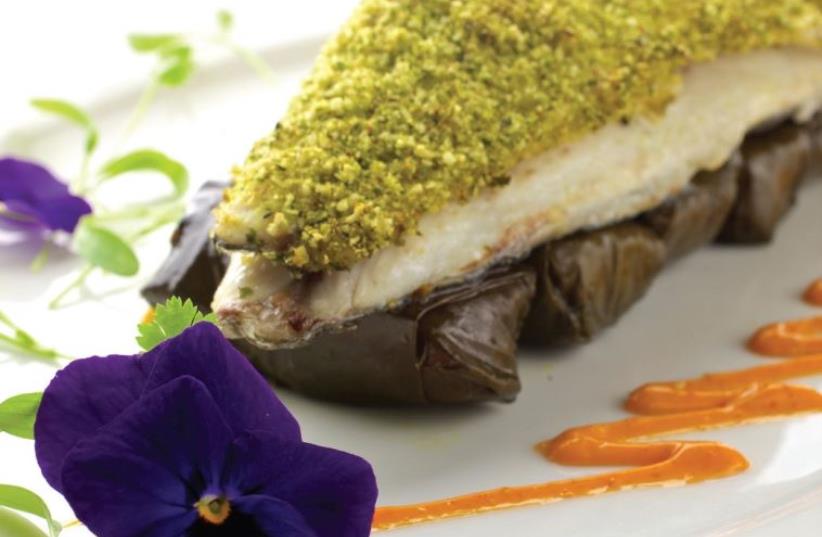 Dagim Fish and Meat Bar
(photo credit: PR)
Advertisement
Upon entering the restaurant Dagim, it is easy to imagine for a moment that you’ve been transported out of suburban Israel to a Southeast Asian land of tall, gabled wooden buildings, patios leading to green lawns and koi-filled mini-canals. The spacious interior is made to seem larger by the floor-to-ceiling picture windows – virtually a glass wall – looking out onto Four Seasons Park. As if the name of the restaurant were not enough of a clue to its specialty, the fresh fish on ice at the entrance completes the picture. The bar, balcony, wall of wine and aquarium add to the positive first impression. The attention paid to the decor is reassuring; if there is similar fastidiousness in the kitchen, all indications are that a very good meal is in the offing. Four months ago, new chef Eyad Agabrya, formerly of sister restaurant Medzzo in Herzliya, took the helm at Dagim, inaugurating a new concept for the menu. In addition to fish and seafood, which remain at the core of the restaurant’s offerings, more pasta and meat courses have been added, to appeal to a broader customer base. Egabrya brings an original approach, borrowing from the Arab cuisine of his home in the Galilee Triangle to create a unique fusion style all his own. At a recent tasting, culinary reporters got the chance to experience some of his innovative creations. As a starter, we had panko shrimp on a bed of fine rice sobu noodles and cubed sweet potato, served with a generous drizzle of sweet chili cream (NIS 54). The noodles and sweet potato were an inspired combination; a larger portion could easily comprise a tasty and satisfying vegetarian dish on its own. The shrimp, meanwhile, were perfectly fried: the Japanese breading crispy on the outside, the succulent meat soft and moist on the inside. They, too – especially dipped into the tangy sauce – could stand on their own. Cut up the shrimp and mix it in with the noodles, and you have one delicious mouthful.Next up was a dish that is one of occasional specials that are offered on weekends so that regular customers will never get tired of coming back: shrimp in a tequila and Tabasco sauce, seasoned additionally with basil and thyme (NIS 89). Strips of zucchini and red onion are added to the mix – that much more variety to swirl in the green-tinted sauce, which was quite unlike anything I have tasted recently. The sauce was so good, in fact, I used the country-style bread (NIS 19) – much like a focaccia, piping hot from the oven – to wipe the plate clean. Lest one think that Dagim neglects fish in favor of seafood, we were served a baked fillet of musar yam (NIS 99). In this instance, the chef was happy to share his secret: A professional steam oven makes ensures that the fish is cooked through while retaining all its natural moisture.Not only was the fish itself flavorful, but it was topped with a winning mix of bread crumbs and ground pistachio nuts and served, intriguingly, on a bed of stuffed vine leaves. The pistachios added a welcome crunch to the dish, which was an unveiling of the type of cuisine we can come to expect from Agabrya. In addition to an augmented food menu, the restaurant is planning to unveil a new cocktails and wine list. We were treated to a promising preview, such as a lemon-mint frozen margarita. But as of the time of this writing, the cocktail menu is still under wraps.The revamped menu, in Hebrew and English, includes children’s meals and very reasonable business lunches, served weekdays until 5 p.m. The restaurant itself is open from noon until midnight, seven days a week. The owners are to be commended for giving the talented young Agabrya his own kitchen to run. Judging by his first few months, he is off to an auspicious start. The writer was a guest of the restaurant.Dagim Fish and Meat Bar Not kosher 7 Hatziyonut St., Hod Hasharon Tel: (09) 742-9900