Be it meat of fish, Tatti serves it with style and grace. 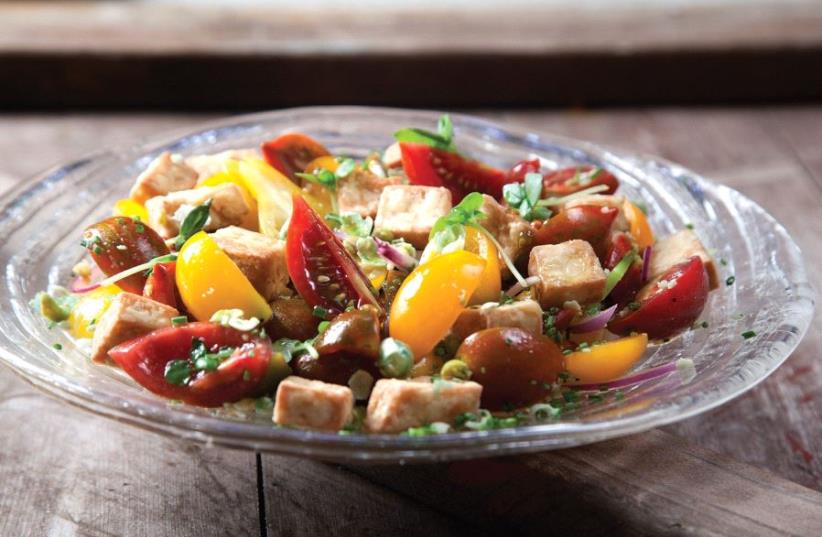 Cafe and Bistro Tatti
(photo credit: PR)
Advertisement
Located in the heart of Givatayim, Tatti is a dining destination that serves food a cut above the rest in a setting that is both casual yet upscale with a buzz in the air. Patrons are greeted by a welcoming ambience, modern decor and a spacious dining room. The menu is quite extensive, with a wide array of salads, pastas, fish and meat dishes.Our waiter was friendly and made us feel at ease. He took his time explaining details of the dishes and drinks.We began our meal with roasted cauliflower in a lemon mustard vinaigrette (NIS 40). I don’t always love cauliflower, but this was crisp, flavorful and cooked just right. This was followed by Roquefort pear salad (NIS 57) with walnuts and maple pecans. Salad is one of those things that are so simple that when you get a really good one that is memorable, it’s something special. And the salad here was just that. It was crisp and vibrant in both color and flavor. The sweetness of the caramelized pears complemented the sharpness of the Roquefort cheese. The salad could have used more pears, but I’m just being picky! In between, we savored some delicious cocktails. My dining partner enjoyed her frozen strawberry daiquiri (NIS 43), while I tried the whiskey sour (NIS 46). The drinks were perfectly mixed and really whet our appetites.For mains, we were presented with the 60-second beef fillet (NIS 132), served on a hot pan with seared vegetables and tahini. Being South African, I was a very happy diner. It was fantastic. The meat tasted like meat, the portion was more than large enough, and the accompaniment of eggplant and tahini gave the dish a Middle Eastern flavor that worked very well.This was followed by the drum fish fillet (NIS 130), served with goat cheese, tomatoes and gnocchi. The fish was cooked perfectly, with crispy skin, and the flesh was fresh and flavorful. It’s great to see a chef using ordinary ingredients to produce such a wonderful plate of food.Last, we tried one of the daily specials – sliced duck breast in a sweet red wine reduction. All the ingredients worked in perfect harmony. The texture of the duck skin had a character of its own. It was crisp yet buttery – a pleasantly surprising contrast to the soft duck meat. The accompanying truffle mashed potato complemented the duck to a T.To satisfy our sweet tooth, we started with the strawberry Pavlova (NIS 41). A Pavlova is a meringuebased dessert named after the famed ballerina, Anna Pavlova. This one was as glorious as she was. The slightly sweet, crisp meringue shell was topped with fresh strawberries, clouds of fluffy whipped cream and pools of strawberry sauce. We were then served the Black Beauty (NIS 41), which consisted of chocolate biscuit and chocolate ganache layers on crunchy cornflakes and praline. This was a delightful mix of textures and flavors that was decadent and rich but not cloyingly sweet.All the staff were extremely friendly and welcoming, giving the place a neighborhood “Come back and see us again” vibe that I love. The service, like the food, was a pleasure from start to finish.The writer was a guest of the restaurant.
Cafe and Bistro Tatti
Not kosher
53 Derech Shalom, Givatayim
(03) 539-2500