The Croque Madame at Roladin is well worth a try. 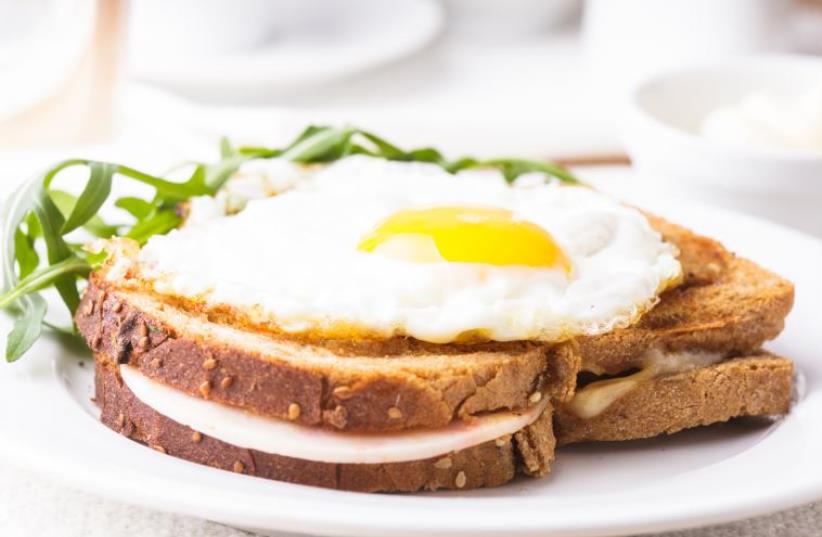 Foodies have naturally adventurous palates and are willing to try any edibles they haven’t tasted before. On the other side of the table are people who are afraid to taste anything new, particularly if it has a foreign name.They hesitate until they see it on someone else’s plate and then, after tasting a tiny morsel at the urging of the companion who ordered it, may decide that it’s not so bad after all. It may even come close to being delicious, though finicky eaters might be reluctant to admit this.The current influx of French immigrants has been followed by the opening of French coffee shops and restaurants, most of them kosher, and most of them in and around Netanya, although there are plenty in other cities and towns as well.Regular Israeli restaurants are also introducing French dishes to their menus. At dairy restaurants, the most popular item is Croque Madame. The authentic Croque Madame cannot be served in a kosher eatery because the real thing is made with ham. At one of the Roladin branches on Hillel Street in Jerusalem, they’ve substituted smoked salmon for the ham, but otherwise it comes as close as it can get to the genuine French recipe.As I don’t mix meat and milk and certainly don’t eat ham, I can only guess, based on recipes that I’ve read, that this is as close a substitute as a kosher eatery can serve, other than imitation meat, which is either vegan or vegetarian.Many years ago in Jerusalem there was a burger bar that served cheeseburgers in which the burger was made from a vegetarian meat substitute that tasted very much like meat, and there were long queues lined up to sample what looked and presumably tasted like forbidden food – but wasn’t. There were many haredim in those queues, and business was so good that it’s truly a wonder that the enterprise didn’t last. Around the same time, there were hotel restaurants promoting kosher “shrimp” and “bacon,” but that too was a short-lived fad.Back to the Croque Madame.The first time I ordered it was at the Haba café restaurant at the entrance to the Mahaneh Yehuda market. The eggs were poached on top of a brioche sandwich that contained very creamy white cheese. It was quite tasty but not sufficiently filling.The second time was at the Grand Café in Jerusalem’s Baka neighborhood, where the eggs were also poached, there was a mix of white and yellow cheese, and there was some spinach. Because my mother, a professional chef, always put a lot of garlic in any spinach and egg dish, I find almost all spinach recipes in Israel to be too bland for my palate – but the brioche was excellent.The next time around, it was Café Paris in Rehavia, which was more or less on a par with the Grand Café, except that the eggs were fried, not poached.And then there was Roladin.What I particularly like about Roladin is that they serve toasted bread, not toasted bagel. Moreover, the bread comes out of a very large loaf pan, which means that a slice actually covers the plate. The toasted sandwich was filled with a blend of melted cheeses and onions and was topped with two fried eggs. Yum! Definitely worth the price of NIS 56. It was so satisfying that I couldn’t eat the accompanying salad, though I did taste it because it looked exactly the same as the one I’d been served in Café Paris the night before. It also tasted the same, which gives one food for thought.Of all the Croque Madames, the one at Roladin was definitely the best.Roladin Coffee Shop and Bakery
Kosher
12 Hillel Street, Jerusalem
Tel: (02) 622-2021
Advertisement
Subscribe for our daily newsletter