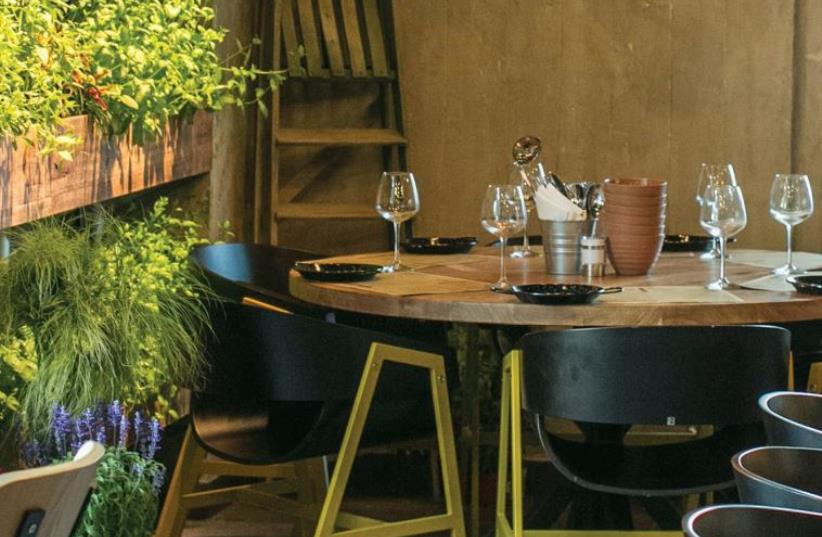 Kitchen Garden restaurant in Hod Hasharon
(photo credit: PR)
Advertisement
The upscale Sharonim Mall near Yarkon Junction off Route 5 is home to several popular suburban restaurants, the newest of which is Segev Kitchen Garden, the fourth restaurant belonging to celebrity chef Moshe Segev (all with his name in the title). The design and concept of Kitchen Garden is different from his others, however. Walking into the restaurant is like walking into a nursery, with planters of greenery lining the walls and decorating the partitions separating the tables. More greenery hangs down from the ceiling, while a leafy garden encircles an al fresco dining area. The kitchen uses the herbs growing in the planters in its food preparation.Deciding where to sit is a little more complicated than simply choosing indoors or outdoors. I counted no fewer than five different kinds of chairs and stools, not including the plush elevated sofa where we finally ended up, after deciding not to sit on the wooden chairs. Wherever you finally sit, you are likely not to find enough light by which to read the menu, which is in the form of a paper place mat. Diners are advised to bring a cellphone that has a flashlight function. While there are menus in English, not all the waiters speak English – although if you ask, they will find one who does.The concept that is unique to Kitchen Garden is explained as soon as you are ready to order: A main course comes with 11 (yes, eleven) starters, all for just an additional NIS 25 per person (NIS 10 during business lunch hours). There is also an option to order 12 starters without a main course, for NIS 58. These starters change weekly, so diners need not be concerned about monotony setting in should they decide to return. And there is enough variety among the selections of vegetarian, pasta, fish, chicken and meat main courses as well.The restaurant has a fully stocked bar, a wine list with a good representation of Israeli and international wines, and domestic and imported beers on tap and in bottles. They also mix specialty cocktails that rotate with the same frequency as the starters. Cocktails cost a reasonable NIS 30 each, or NIS 25 each when a large one is split. Judging from the spread of starters we were served, the assortment is likely to include the restaurant’s buttery focaccia, soup, Asian-inspired salads, and salads based on lettuce greens as well as on cabbage leaves. There is likely to be one or two spreads as well; and if you are fortunate, one will be the liver mousse – decadently rich, since it is made with butter, and lightly topped with an inspired coulis of caramelized onions, figs and red wine.For main courses, my companion and I ordered one chicken dish (NIS 69) and one steak (NIS 125). The skinless and boneless chicken breast was grilled to perfection and served with chutney – one of four classic ways the kitchen will prepare chicken. The spicy pepper chutney with coriander and olive oil was an excellent complement to the moist white meat.The entrecote, meanwhile, came exactly as ordered: medium-rare. My dinner partner, a restaurateur himself, declared himself impressed with the work of the grill master. The juicy steak needed no condiments, but it came with a few dabs of Dijon mustard, which indeed enhanced a few forkfuls. Both the chicken and the steak were plated impressively, in iron skillets set into notched wooden plates.The main courses come with a choice of side dishes, and mine was a pleasant surprise. I ordered the sweet potato without giving it much thought, but the superb flavor and fluffy texture were unlike any I had ever experienced with this simple tuber. In spite of the main course and multiplicity of starters that could leave one fully sated, it is worth saving room for dessert. The desserts here (NIS 35) are called atzitzim (plants), each one with a designated nationality and garnished with sprigs of green. Most are based on ice cream, all flavors of which are made on site. The waitress recommended the Belgian – a chocolate extravaganza – and the Thai, featuring coconut cream and tropical fruit salad. We tried valiantly to finish the generous portions served in deep dishes but couldn’t manage it.It looks like Segev has come up with another winning formula, and one that will not break the bank. Reservations are highly recommended, even midweek. On weekends, I’ve seen lines out the door. The writer was a guest of the restaurant.Kitchen Garden
Not kosher
2 Harakun St., Hod Hasharon
Tel: 077-414-2025