For delicious kosher deli and then some, Sara’s Place is the place. 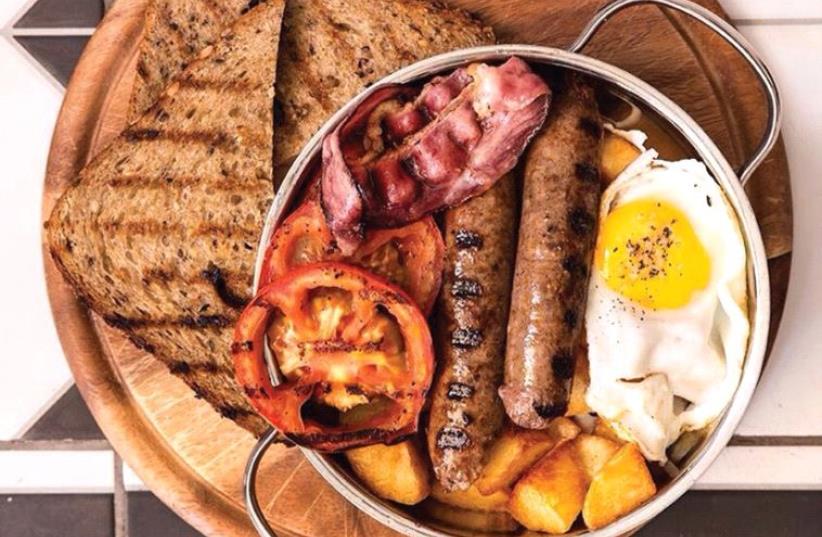 Sara’s Place
(photo credit: PR)
Advertisement
It’s not easy to be both trendy and tasty. But Sara’s Place, recently opened on Ra’anana’s bustling main street of Ahuza, manages to pull it off to perfection. Capitalizing on the latest fad of retro-diners and “shake-shacks” – all the rage now in America – this cozy little kosher restaurant and deli, with its posters of famous New York sites, funky checkerboard floor and 1960s pop music, has great food and a friendly, hip atmosphere.Proprietress Sara Spigler, the premier caterer in the city, is well known to Ra’anana residents and has been preparing sit-down and takeaway food for more than 30 years.But this little spot of heaven has really made her the darling of the town.We started our culinary experience with cocktails, made to order by maitre d’ Nechama. My dining partner had an apple mojito, and I had a gin and tonic with a cucumber twist. Both were delicious and set the mood for a fabulous dinner. We ordered appetizers of gnocchi, served with a garlic aoli sauce, and chicken wings in a caramel and nut overlay.Both were excellent.Choosing a main course was quite a challenge because there are so many unique items on the menu.These include the Manhattan – an open-face rye bread sandwich with a choice of deli meat, topped with mashed potatoes and gravy; the Brooklyn, which is corned beef topped with grated egg and fried onions in duck shmaltz; and the Abester (lovingly named for Sara’s husband), which is a chopped liver, pastrami and turkey sandwich.I was tempted to order the Sloppy Joe, one of my all-time favorites, but opted for Sara’s amazing Southern fried chicken, served with sides of corn, charred onions, salsa and the house sauce. Talk about finger-lickin’ good – this chicken would make even Colonel Sanders proud! (I’m told that this is the only place in Israel where authentic fried chicken is available).My dining partner – always a lover of deli – chose an overstuffed combo of pastrami and corned beef on rye, with a side of potato salad and a good old-fashioned pickle to boot.For drinks, I had a root beer – a real root beer, mind you, not the dark beer (bira sh’chora) that is often confused for the real thing – while my partner had a Cream Soda, with just the right touch of vanilla extract.All this was extremely scrumptious, and very filling, but we had to leave room for dessert, since there was no way we were leaving without tasting the Oreo Cookie Fondant and the Tri- Color (chocolate, banana and peanut butter) sorbet. Both were from another planet called Ecstasy.All told, our extensive meal for two came to under NIS 200 – well worth every shekel.Sara’s Place also features kids’ meals and vegetarian/diet selections, as well as The Vegan, which consists of charred mushrooms and friend onion with BBQ sauce, served on ciabatta bread with grilled tomatoes, lettuce, red onion, pickles and pesto, with a side of French, Cajun or sweet potato fries. As chefs Isaac and Moishie told us, vegetarian meals can be every bit as tasty as their meat cousins. There are also pasta dishes and a great house salad, deli meats optional. The house drink is Shapiro’s beer.Sara’s Place is kosher (Rabbanut Ra’anana) and is open Sunday to Thursday from noon to 10 p.m. On Fridays, the restaurant converts to prepared foods for Shabbat, with all the traditional favorites. There is a parking lot adjacent to the restaurant, with dining both inside and al fresco.The restaurant has a special vegetarian menu for the Nine Days (August 4 to 12) for those who do not eat meat during that time.But whenever you go, be sure to call for reservations; the night we ate there, the line was out the door.The writer was a guest of the restaurant.Sara’s Place Kosher 130 Ahuza (at Tel Chai Street), Ra’anana Tel: (09) 974-4089