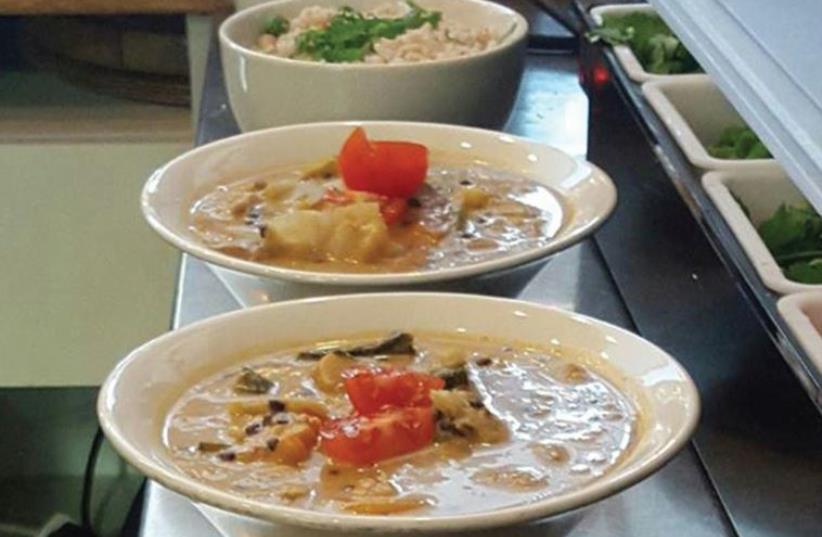 Market vegan restaurant
(photo credit: PR)
Advertisement
Although it was after peak lunch hours when I arrived at the small storefront on Tel Aviv’s Dizengoff Street, the eatery was so crowded that I had to wait outside a bit for some space to clear. That gave me a few moments to read the sign on the door announcing “Market, Seasonal Kitchen, 100% Vegan.”Once inside, the pots of soup and stews lined up behind the handsome wood and glass bar added to the feeling of a warm, intimate welcome.There are comprehensive menus in Hebrew and English, with indications as to which dishes are spicy or contain gluten. But the best source of the day’s offerings is the large blackboard, whose listings are only in Hebrew.Nevertheless, one bit of information is evident in any language: The most expensive item on the menu is NIS 38.While the menu references 19 soups, the blackboard lists only two, along with three stews and a pair of recommended dishes. The good news is that you can request tastes of anything simmering in the pots on view.We started with the soups of the day, the first of which was Thai pumpkin (NIS 32). One taste of the coconut milk-based orange broth, seasoned with lemongrass and a hint of chili, made us grateful that the chef was in an Asian mood that day. Not only was the soup as good as any Thai restaurant could make, but I have no problem saying that it was the tastiest bowl of soup I have eaten this winter.The second soup was harira – a thick Moroccan combination of lentils and root vegetables (NIS 28).Once again, it was delicious and a hearty antidote to winter weather.The first recommended dish of the day was a winter variation on Market’s Indian Summer dish (NIS 36): a rice salad with peanuts, coriander, sprouts, carrot, green onion and a chili coconut sauce, served atop creamy, warm yellow dal (lentils). The portion was very generous, and the dish as a whole very creative, featuring a nice interplay of temperatures and flavors.Lentils took center stage yet again in the Royal Thai feast (NIS 36), served with a choice of glass noodles or white or brown rice. Cooked in coconut cream and garnished with cherry tomato and green onion, the lentils were rich and satisfying.The “feast” included a refreshing side salad of root vegetables: bean sprouts, beets, radish, carrots and green onion, topped with ground peanuts and crushed chili, and dressed with an interesting sweet and salty dressing.There were also large salads that were meals in themselves. A particularly good one was the red quinoa salad (NIS 38). It is a little different at Market, as the grain is sprouted and uncooked. The quinoa is tossed with lettuce, cabbage, carrot, cucumber and green onions and slathered in a terrific citrus vinaigrette – a fantastic blend of olive oil, fresh lemon juice and raw tehina.The desserts manage to be tempting while staying true to the restaurant’s vegan mission. It was hard to believe that the dense chocolate truffles (two for NIS 7), smothered in flaky toasted coconut, were non-dairy.Finally, fans of tapioca can enjoy the cool, liquidy version served here, with diced fresh seasonal fruit swirled in among the delicate tapioca pearls.Market has developed a loyal following after three years in its original King George location and one year at its expanded premises.And patrons can indulge their appetites practically any time of the day or night, from noon until 11 p.m.This is one praiseworthy establishment that lives up to all parts of its motto: “Because fresh, tasty, healthy foods should be affordable.”The writer was a guest of the restaurant.