Dinner at the Dan Hotel

The in-house restaurant is intimate and inviting 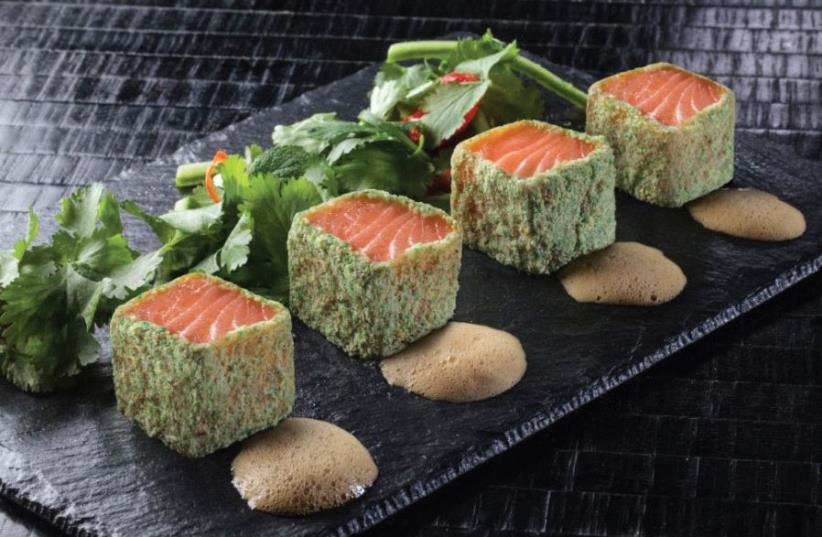 Dan Hotel in-house restaurant
(photo credit: PR)
Advertisement
The Dan Hotel Tel Aviv, like the chain’s counterpart in Jerusalem, the iconic King David Hotel, takes pride in displaying the autographs of the hotel’s most illustrious guests over the years. Naturally, as one of Israel’s most prestigious hotels, it must offer a fine dining option, and the in-house restaurant takes it name from the building’s address: Hayarkon 99.The restaurant space is both compact and elegant – only nine tables, covered with white linen tablecloths. When it is less than half full, it is cozily intimate; when it crosses that threshold, it can get a little noisy. Moreover, since there are only two waiters, service can slow down.The service is indeed professional. As soon as we were seated, we were asked if we wanted still or sparkling (mineral) water to drink; our glasses were poured and refilled when necessary, although the bottle did not stay on the table. We were also served bread, with tongs – choices of rolls, sliced whole grain bread or whole grain crackers. A butter knife was provided for the accompanying excellent eggplant and olive oil spread.Hayarkon 99 offers no specialty cocktails, but the hotel’s bar will mix most of the classics. There is an adequate wine list representing some of Israel’s leading wineries, although there are only five available by the glass. Among them is the one house wine: the King David Cabernet Sauvignon (NIS 36), a very pleasant and versatile red.According to the waiter, there were several new items on the food menu, including a hamburger. We found it interesting that he described it differently to different tables. He told us it was beef, a neighboring table that it was lamb, and yet a third table that it was a combination of three kinds of meat.As a whole, we observed that the new menu bore scant resemblance to the version posted online. It would be quite impossible to plan your dinner in advance based on the menu presented on the website.The menu is, in fact, not very extensive. It lists only four appetizers, one salad and three soups, followed by eight main courses that comprise chicken, fish and meat choices.As a starter, the waiter recommended the red tuna tataki (NIS 67): three large squares of ruby red fish encrusted with black pepper, beautifully presented on a layer of parsley oil. There was no hint of the spiciness implied by the menu’s mention of a jalapeño sauce; but this omission was beneficial, allowing the true flavor of the extremely fresh raw fish to shine in its own right.The artichoke tortellini is offered as an appetizer or a main course (NIS 57/87). The plump buttons of pasta were stuffed with a delectable artichoke filling and accompanied by diced tomato, as well as small dollops of a delicate eggplant cream. Once again, the menu description of a tomato cream did not materialize, although it was hardly missed.As an intermediate course, we had the gazpacho (NIS 45), which was deftly decanted tableside from a carafe into a bowl containing halved cherry tomatoes, thinly sliced cucumber and Kalamata olives. The refreshingly cold soup was delicious, especially after being generously seasoned with black pepper freshly ground by the waiter.Our first main course was the baked pink trout with horseradish cream (NIS 109), which came with two thick disks of roasted potato, tiny slivers of beetroot and pickled red onion. The gorgeous fish was prepared perfectly, and nicely enhanced by the relatively mild condiment.Next was the veal fillet (NIS 130), which looked and tasted exactly like a filet mignon of beef. It was certainly tender enough to be from a young calf, while it packed the full meaty flavor of a succulent steak.Side dishes are ordered and priced separately. The very good pan-fried spinach (NIS 21) and fluffy mashed potatoes (NIS 19) were each served in their own miniature skillets.The dessert menu was rather limited, with sparse descriptions. Only one of the six choices appealed: a chocolate fondant with orange marmalade and vanilla. We were told it would be an 11-minute wait, and we agreed. Halfway through that time, however, we were informed that no chocolate dessert would be available.As a second choice, we opted for what we read was coconut panna cotta. Imagine our surprise, therefore, when we were served mango sorbet, with no sign of a white pudding. Tired of being misled twice, we decided to forgo dessert.We know that Dan Hotels are capable of better. Our consolation for the evening was the truly fine meal we enjoyed up until dessert. Potential diners may be assured that the only improvement Hayarkon 99 needs is the relatively simple task of correcting easily preventable menu snafus.