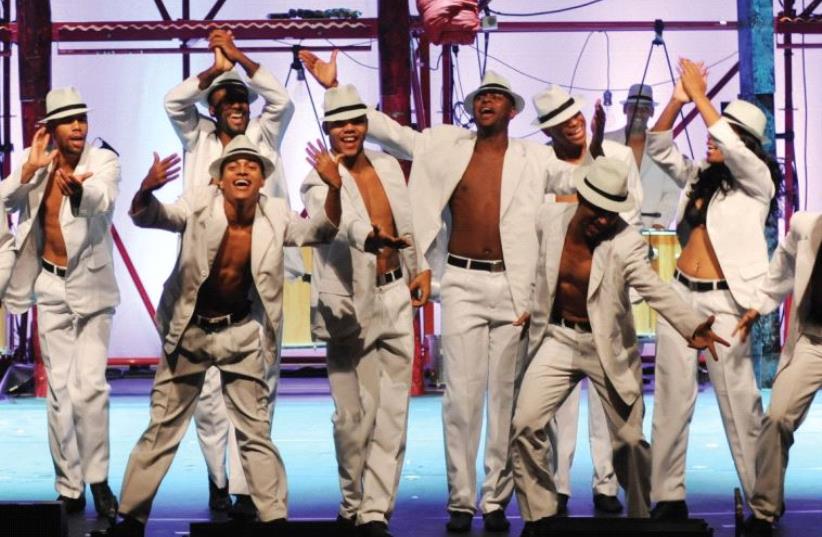 Bale de Rua
(photo credit: FREDERIC DESMESURE)
Advertisement
Twenty-five years ago, the streets of Uberlandia, Brazil, sounded a lot like the streets of the Bronx or downtown Brooklyn. Traffic, voices and American music were the overtones of life in the chaotic city.“Michael Jackson, MC Hammer, Grandmaster Flash, James Brown… that’s what was playing back then – only American music,” recalls choreographer and performer Fernando Narduchi.Narduchi, 60, speaks slowly with a melodic accent. He apologizes for having “not great” English, though he goes on to articulate his thoughts flawlessly. He was born and raised in Uberlandia, the second-largest city of the western state of Minas Gerais. For as long as he can remember, Narduchi moved to music and, as such, found himself magnetically pulled towards anything that involved dance and rhythm.This month, Narduchi will come to Israel for the first time to present the evolution of that search, the internationally acclaimed company Bale de Rua’s (Street Dance) Baila Brazil, to the Tel Aviv Performing Arts Center.“There was a very strong street dance movement in the city. There were a lot of groups, and there was a big dance festival in Uberlandia,” he says.Together with friends Marco Antonio Garcia and Jose Marciel Silva, Narduchi reimagined the possibilities of street dance in Brazil.“I met Marco Antonio, and we became friends. He was a great dancer with good ideas. We had that moment when you meet someone and you feel you can do something good. We shared many ideas and ideals, and we wanted to make a professional company. It was just a dream at that time.Nobody believed we could achieve this; to make a living from dance is not easy. Everybody said to us, ‘It won’t take you very long it’s just a dream. In a few years you will give up.’ But we believed and we continued to develop the company and research new styles and to make a mix,” he says.“We wanted to create something new. We didn’t know how it would be, if people would like it or not. Everyone was using American music, but we didn’t want to follow that movement anymore. We wanted to make a Brazilian street dance, not American. We brought some traditional dances from our culture to our research. We started to bring capoeira, congado, samba into the work,” he explains.Bale de Rua was founded in 1992 in Uberlandia, where the company works to this day. From performing among friends in street festivals, Narduchi and partners moved to local, then international, stages.Over the past two decades, the company has been invited to perform in the world’s most prestigious theaters, such as the Sydney Opera House and London’s Royal Festival Hall. Off stage, the company runs a school for young dancers, which provides a meaningful alternative to street life.“We have this project called New Talents, which we started in 2000. We started to give opportunities to new people who don’t have the chance to go to a dance school. Most of them live in very poor areas and can’t afford dance classes. We decided to share what we have with them,” he adds.Narduchi goes on to say that many of the dancers that will perform in Tel Aviv came to Bale de Rua via this project.“It’s very good for us. The project gives us a lot of energy after all these years. When we meet these young people, they re-energize us,” he says.And energy is, arguably, the predominant element of Baila Brazil. The production takes audiences on an emotional and visual tour through the favelas, the streets and the stages of Brazil.Woven into the show are key moments from Narduchi, Garcia and Silva’s development, coming together to create a type of moving quilt.“This show is about love, truth and energy,” he beams. “There is so much happiness in what we do.To create, to research, to go to the studio and start to research movement, to meet everyone. The music. The happiness we have when we are together. Every day we are thinking about new things and sharing. We always were like a family. It’s part of my life, and I can’t think about myself without the company. We are a factory of dreams.”Bale de Rua will perform ‘Baila Brazil’ at the Tel Aviv Performing Arts Center on November 2, 3 and 4. For more information, visit www.israelopera.co.il.