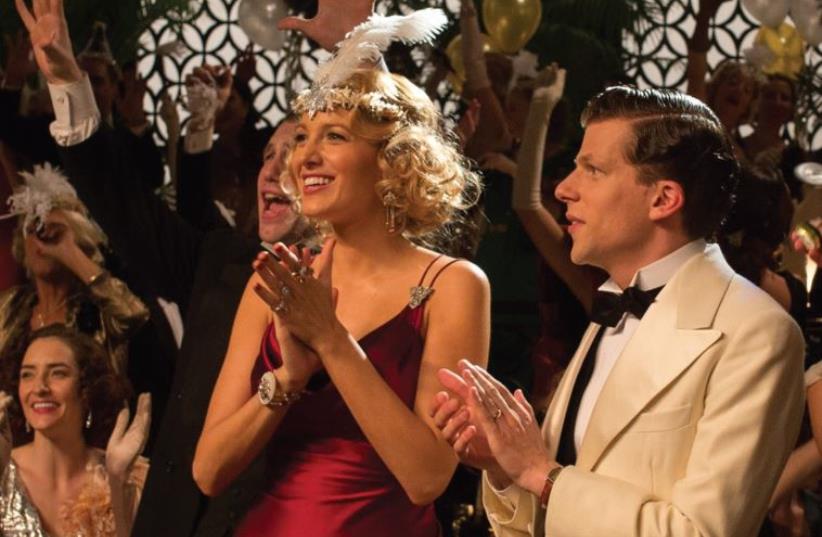 ‘Cafe Society’
(photo credit: PR)
Advertisement
There’s not much to Cafe Society, but for a while now Woody Allen has been getting by with not much happening at the keyboard. Thanks to the warm, glowing light lavished on the film by cinematographer Vittorio Storaro, shooting digitally, the writer-director’s 47th feature looks like a million bucks in that drippingly nostalgic late-period Allen way.The dialogue? It ranges in value from a quarter-million dollars to a buck eighty-three. Then again, the cast is pretty wonderful, particularly Jesse Eisenberg and Kirsten Stewart, who conduct a stealthy acting class throughout Cafe Society. They remind us that even routine banter and sentiments can be made to work with a light touch, a little sincerity and the right faces in close-up.The actors look swell in their 1930s duds. (Allen regular Suzy Benzinger did the clothes; Santo Loquasto went to town on the production design.) If that sounds shallow, well, costumes matter, especially when swank escapism – Manhattan nightclubs and Hollywood parties, antidotes to the Depression – was foremost on Allen’s mind shooting Cafe Society. (He has acknowledged that the project went over budget, completed for somewhere between $25 million and $30 million, higher than usual for Allen’s annual movie.) Stewart and Eisenberg clicked beautifully in the lovely 1980s-set romantic fable Adventureland, and their subsequent film careers have become triumphs of the narrowrange but first-rate actor. All actors have their limitations, but with certain ones, dazzling versatility is neither their goal nor their forte. Eisenberg and Stewart are remarkably similar in their techniques. They hang back. They’re great listeners. Their know how to keep a scene moving and how to pierce even an obvious moment of conflict or revelation or plain old exposition with a little arrow of truth. They have never been more appealingly glamorous than they are in Allen’s 1936-set seriocomedy, located in never-never Hollywood and grubbier, vital New York.The story here is made up of stray stardust memories, fashioned around a fairly entertaining romantic triangle that turns into a quadrangle. Bobby Dorfman, the Eisenberg character, leaves the Bronx to make his fortune in Hollywood. He pays a visit to his big-time agent uncle (Steve Carell, playing a cliche, but not in a cliched way). Bobby falls hard for his uncle’s secretary, Vonnie (Stewart). He courts her, earnestly; she speaks of a faraway boyfriend, but she’s lying — she’s the lover of her employer, and Carell’s character, a blowhard but apparently sincere, keeps making noises about leaving his wife.That covers one narrative line in Cafe Society. The other half, the East Coast half, deals with everything Bobby left behind and why he eventually comes back. Bobby’s gangster brother (Corey Stoll) runs a sleek nightclub Bobby returns to manage. (Jeanne Berlin and Ken Stott play Bobby’s parents, and it’s too bad their material wasn’t better, more amusing, more something.) Blake Lively, currently dealing with that shark in The Shallows, appears on the scene as Bobby’s second chance and first wife. Then Vonnie drops back into Bobby’s life, and as Allen himself tells us in the guise of voice-over narrator, the young man has never really gotten the love of his life out of his mind.The gangster scenes in Cafe Society couldn’t be flatter or more hackneyed. The comedy works only fitfully well. But when the central players enact the scenes of courtship and humanize even the weaker material, the movie quietly shifts into a more compelling gear. It’s strange, really. You don’t necessarily “believe” a damn thing in this movie, and to enjoy any of it you must set aside the lingering questions of Allen’s off-screen behavior and allegations of sexual abuse long enough to take Cafe Society at face value.This is Allen’s 47th feature in 50 years. I’ve long since given up hope that Allen wants to grapple with much of anything at this point beyond surface satisfactions. The score of Cafe Society leans hard on the canon of Rodgers & Hart, and “I Didn’t Know What Time It Was” opens the film, heard under the credits. “I thought I had a trick or two/ Up my imaginary sleeve,” goes one of Hart’s lyrics from that song. Does Allen believe he has a trick or two left to share? Some lines in the dialogue are so prosaic (“He was smitten by her face”), it’s hard to believe they made the final script.The film’s depiction of romantic love comes down the usual: chance and timing and luck. Yes, well, can’t argue there. But then something interesting happens right at the end, not in terms of story but tone. A complex and wisely bittersweet chord is struck, similar to the one at the end of Vicky Cristina Barcelona on the airport escalator, with the young women wondering what just hit them. Allen seems to recognize that wallowing in old love and seductive nostalgia has its drawbacks. Cafe Society is a good-looking nothing, but there are times – thanks more to Allen’s direction than his writing, and thanks mostly to the people acting out the masquerade – when “nothing” is sufficient.