The National Geographic's 10-part series 'Genius' explores the tumultuous personal life of one of the world's most famous scientists. 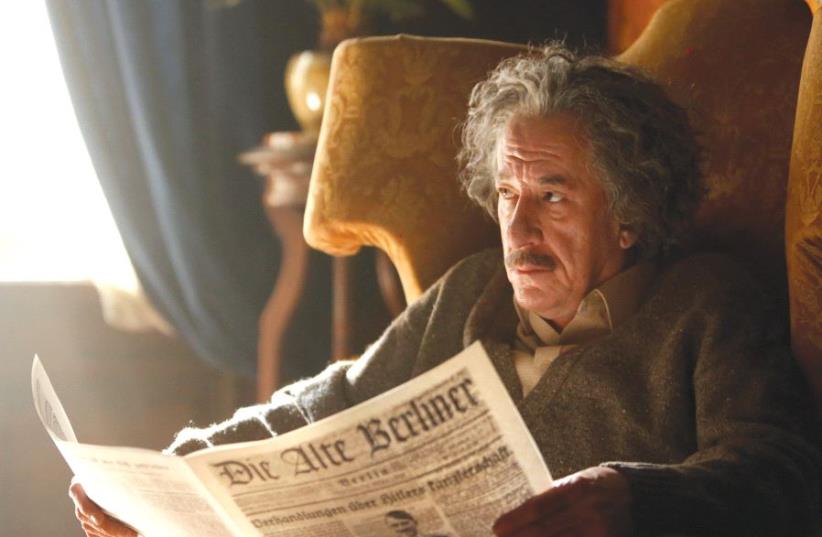 GEOFFREY RUSH stars as Albert Einstein in ‘National Geographic’s ‘Genius.’
(photo credit: DUSAN MARTINCEK/NATIONAL GEOGRAPHIC)
Advertisement
In the first three minutes of Genius, a Jew gets assassinated in the streets of Germany, and Albert Einstein has sex with a woman up against the wall of his study.  The Jew? German foreign minister Walter Rathenau. The woman? Decidedly not Einstein's wife at the time. But he was still thoughtful enough to brush the chalk from an equation off the back of her dress. Those three minutes dynamically set the tone for Genius, a 10-part series that will air on the National Geographic channel in 171 countries and 45 languages. If you're expecting talk of physics, equations and experiments - they're all in there. But there is also a strong focus on Einstein's troubled interpersonal relationships - including a slew of infidelity. His life is set against the backdrop of the rapid, insistent spread of Nazi ideology, which later forced Einstein to flee to the United States. The show, produced by veterans Ron Howard and Brian Grazer, traces the life of Einstein from his teenage years through his rise to fame in Europe and later life in New Jersey. The series is Howard's directorial debut for a scripted TV show, as well as the first scripted series to be aired on National Geographic. It's based largely on Walter Isaacson’s 2007 book Einstein: His Life And Universe. Johnny Flynn plays Einstein in his young, troublemaker years, and Geoffrey Rush portrays a remarkable likeness of the scientist after he gains prominence and respect. While the explosive opening scenes take place in 1922, the first episode flits back and forth between Einstein as a rebellious teenager in the late 19th century and the professor shortly after winning his Nobel Prize. The series then settles down to tell a chronological story of a remarkable man amid a deeply darkening background in Europe.  It is jarring - albeit slightly cliche - to hear a colleague of Einstein, speaking in the 1930s, dismiss Hitler as a "loud-mouth art school reject with a handful of supporters in a country of 60 million" who will be "gone in a year." It is unclear, as the series progresses, how much will be made of Einstein's passionate support of Zionism and the nascent State of Israel.While scholars of the famed scientist are no doubt familiar with his many romantic indiscretions, the average viewer will likely be shocked to see the iconic, frizzy-haired genius in flagrante - and with his pants around his ankles, no less. But it is these interpersonal relationships that keep the series captivating, from Einstein's young girlfriend Marie Winteler, to his eventual first wife and intellectual equal Mileva Maric, his second wife and cousin Elsa Lowenthal, and the slew of women he cheated on them with. The woman against the chalkboard? That was his secretary Betty Neumann, and she was hardly the first or the last. After all, Einstein tells her shortly after their liason, "Monogamy is not natural - it's a construct of religious authority."  It's quite a line - but the sparkling personality and humor of both Flynn's and Rush's portrayal keep Einstein likable, even relatable at times. The remarkable supporting cast, including Emily Watson as Lowenthal, Samantha Colley as Maric and Michael McElhatton (Game of Thrones) as scientific foe and Nazi supporter Philipp Lenard, only add to the dynamic drama. Later Einstein comes up against J. Edgar Hoover - played by Grey's Anatomy's T.R. Knight - the FBI director with a vendetta against the scientist and his radical political views.National Geographic, which is working to revamp its image and brand, has already renewed "Genius" for a second season - though featuring a wholly different brilliant mind. Who? That will only be revealed during this season's finale. "Genius" premiers on the National Geographic channel in Israel on Saturday night at 9:45 p.m. It airs in the US on Tuesday nights at 9 p.m.