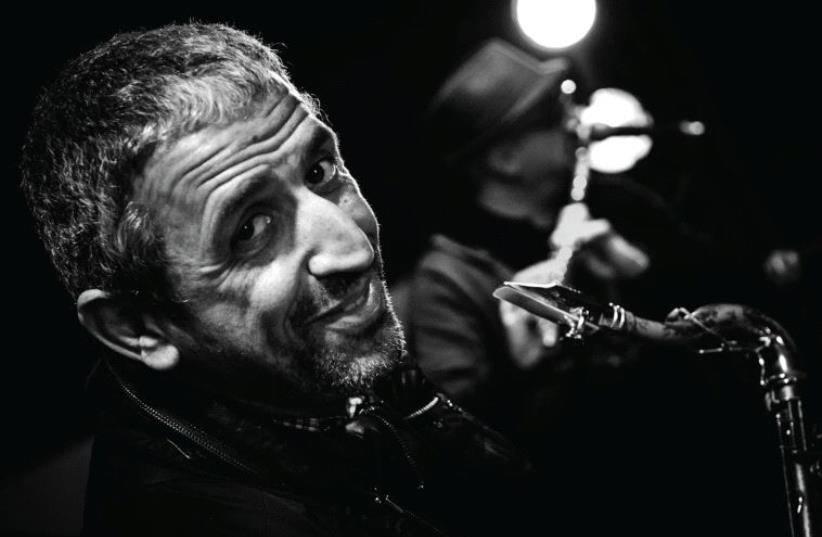 Jazz saxophonist Rino Cirinna
(photo credit: Courtesy)
Advertisement
One may not easily associate Irish endeavor of a musical ilk with jazz, although the Emerald Isle does have a couple of popular international events in the sector, such as the Cork Guinness Jazz Festival.In Israel, the second annual International Jaffa Jazz Festival, due to take place September 15 to 17, features a fine Irish specimen of the artistic category in the shape of 55-year-old guitarist Mike Nielsen. The program also includes artists from Austria, France, Serbia, Romania, Italy, Spain, Hungary, Belgium and the US, as well as more than 40 of our homegrown talents. As with the inaugural edition, the shows at this year’s bash will be based on tributes to some of the art form’s lates and greats, with the band leaders offering their personal takes on numbers by the likes of Duke Ellington, Carlos Jobim, Cole Porter, Rodgers and Hart and Thelonious Monk.Nielsen’s wide-ranging oeuvre to date has seen him roam seamlessly through sonic sectors that take in traditional jazz through to microtonal exploration, and plenty betwixt.His family name suggests that the guitarist does not hail from a long entrenched Irish family. His parents relocated from Denmark in the 1950s to set up a lock production plant in Sligo. Nielsen Sr.clearly had little idea about whither he was heading.“He looked in his sister’s geography book, which said there were palm trees in Ireland and sunshine all year round,” Nielsen laughs.Meteorological misinformation notwithstanding, his dad stuck it out and even thrived in his adopted cultural milieu.Nielsen Sr. was clearly a capable person and also helped to kick-start his son’s musical career.“My father played trumpet. He had a Dixieland band, and I performed with them. I even played with Acker Bilk, with my dad’s band once. That’s how I got into jazz – because of my father,” he recounts.The guitarist got his initial handson introduction to music at the age of four on the ukulele.“My dad bought me a ukulele, but I really wanted to play trumpet like him,” he says. “He also played a bit of guitar, and he’d accompany me. We’d play Dixieland.”Nielsen’s eventual progression to guitar, rather than his dad’s wind instrument, was down to cold, hard reality.“Trumpets were expensive, so I settled for a guitar,” Nielsen explains.The youngster made great strides, and by the age of 12 he was playing professionally.“We’d play country and rock and that sort of thing,” he says. “I’d listen to 1970s bands like Steely Dan, Deep Purple and Status Quo and, of course, [feted Irish blues and rock musician] Rory Gallagher.”Nielsen also had an Irish idol to fire his evolving jazz sensibilities. “There was Louis Stewart, who just died,” he says.Guitarist Stewart, who recently passed away at age 72, was the first Irish jazz artist to establish himself on the international scene.“He went to [London jazz venue] Ronnie Scott’s, and he played with [stellar British bebop saxophonist] Tubby Hayes.”Stewart was the catalyst for Nielsen’s transition into more contemporary improvisational fare.“He was a very individual musician, and I’d listen to him a lot. That’s how I got into more modern jazz,” he says.However, Nielsen had still not quite settled on his eventual avenue of musical expression and was rerouted to classical climes when a pal played a work by 20th-century Brazilian composer Heitor Villa-Lobos for him.He promptly got himself over to the Royal Irish Academy of Music and the Dublin College of Music. But Nielsen’s musical meandering had one final bend to navigate.“I thought I’d be in classical music for life, but because of my background I realized I was really an improviser,” he says.Nielsen sent a tape of his playing to the Berklee College of Music in Boston and spent a couple of years studying jazz formally.He opted not to make the generally considered requisite post-studies move to New York’s “university of the streets” and returned to Ireland. Even so, he found plenty of room for artistic maneuver, enjoying a lengthy berth with free jazz saxophonist Dave Liebman, as well as a string of other well-considered industry leaders such as trumpeter Kenny Wheeler, pianists Kenny Werner and Jason Moran and saxophonist Joe Lovano.“I was always into dissonance anyway,” Nielsen states. “I also have a microtonal guitar. I have an extra 19 frets on it, and I play around with sound.”That said, Nielsen says he has no problem with following the straight and narrow mainstream jazz path, too.“My new microtonal trio is going to play with electronics, but I love playing Dixieland. I think it is fantastic. I think it is a totally different kind of jazz than anything that came after it.”Nielsen’s tribute slot in Jaffa next Friday spotlights the music of pianist, composer and band leader Duke Ellington, who first took the bandstand during the Dixieland heyday and forged his singular way through an abundance of styles and genres during a career that spanned more than half a century. Sounds like Nielsen fits the bill.

For tickets and more information about the International Jaffa Jazz Festival: (03) 573-3001 and www.hotjazz.co.il
Advertisement
Subscribe for our daily newsletter