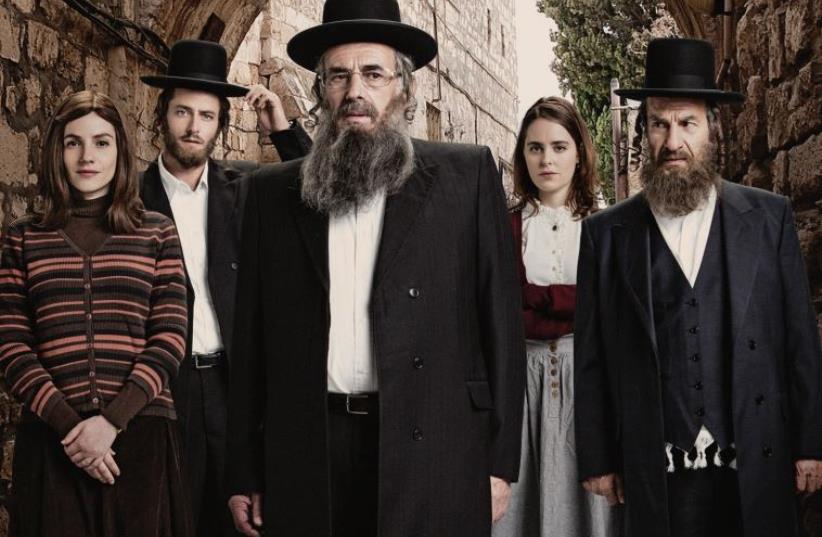 ‘Shtisel’ TV show
(photo credit: TAMAR LAM)
Advertisement
The new episodes of Season Two of Shtisel , the excellent Israeli drama set among the ultra-Orthodox in Jerusalem, have been released to critics, and the good news it that the show looks just as strong as the first season. It will premiere on October 31 on YES Oh at 10 p.m. and is already available on YES VOD.The magic of this series is that the characters are not generic. The series’ creators, Yehonatan Indursky and Ori Elon, let you get into their heads, even the less sympathetic ones such as the elder Shtisel, Shulem (Doval’e Glickman), who is bossy and judgmental with just about everyone, especially his sensitive, creative son, Akiva (Michael Aloni). And when you understand why they are doing what they are doing, you can sympathize with them, even if you know you wouldn’t like them in real life. The series occasionally employs dreams and flashbacks (both techniques that are so over-used that any director or writer should be very cautious about trying them) in a way that actually deepens our perspective on the characters instead of just underscoring what we already know about them. For example, the nightmare that Shulem has about a visit to a cemetery with his mother is a particularly evocative way to open the series. Two new characters are introduced in the first episode – Shulem’s brother Nahum (Sasson Gabbay) and his daughter Libby (Hadas Yaron), who return from Belgium to see Nahum and Shulem’s mother, Malka (Hanna Reiber), who is in a coma. It’s clear from the start that an important part of the plot this season is going to revolve around the cousins Akiva and Libby and their attraction to each other, which goes back to their childhood. Hadas Yaron seems almost to be reprising the role in Fill the Void for which she won the Best Actress Award at the Venice International Film Festival. This actress, who is not observant in real life, must feel quite at home in the long-sleeved sweaters and long skirts she wears on screen. In a new feature film she stars in, Felix and Meira , which won the Best Canadian Feature Award at the Toronto International Film Festival, she plays yet another ultra-Orthodox woman, this one a wife and mother who falls in love with a secular man. The film, which is in French and Yiddish, is Canada’s official submission for consideration for a Foreign Language Oscar this year. Let’s hope that this romance is as interesting and complicated as Akiva’s attraction to an older, twice- widowed woman played by Ayelet Zorer (who apparently is not coming back this season) was last year. Shtisel is one of the best Israeli television series. Although because of its setting it may not be snapped by an American network for an adaptation, that doesn’t detract from its quality.If you found Citizenfour, about US whistle blower Edward Snowden, interesting, then you’ll want to check out the documentary Silenced on Channel 1 on October 31 at 10 p.m. Directed by James Spione, it looks into the heavy personal and professional consequences three people who have been charged by the Obama administration with violating the Espionage Act have faced. As the US political election process starts going into high gear, you can watch the drama The Butler , which is premiering on HOT Gold on November 6 at 10 p.m. The fact- based story of the first African- American butler in the White House, who served eight presidents, is not a subtle movie, but it is intense and entertaining. Directed by Lee Daniels, it stars Forest Whitaker as the hero, and those playing the presidents include Robin Williams (Eisenhower), James Marsden (Kennedy), Liev Schreiber (Johnson), John Cusack (Nixon) and Alan Rickman (Reagan). These might seem like eccentric casting choices, but they work surprisingly well. While this movie might sound like a tough sell to a teenager, if you can get yours interested it will give them a crash course in American history that is surprisingly enjoyable.