Kim Kushner’s latest cookbook provides a bevy of unique dishes that just happen to be kosher. 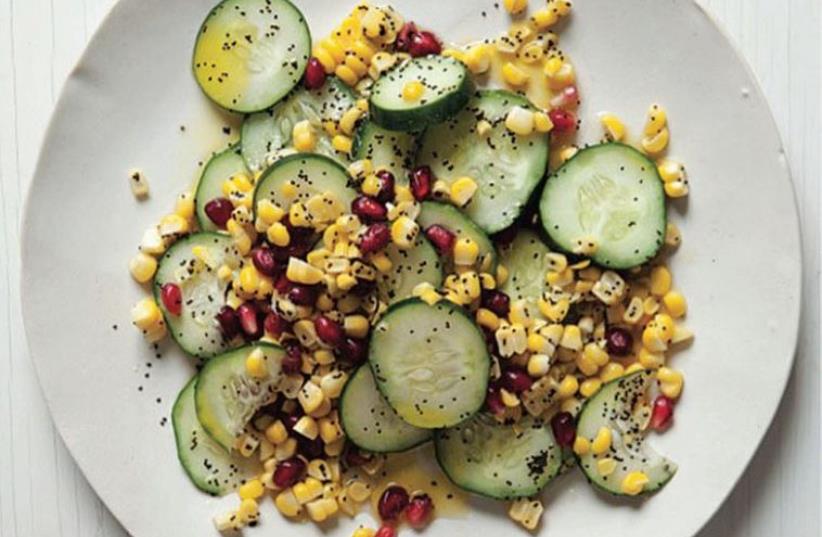 Cucumber and Corn Salad with Poppy and Pomegranate
(photo credit: KATE SEARS)
Advertisement
Kim Kushner doesn’t always like to cook.Those are surprising words from a cookbook author and culinary instructor.What’s even more shocking is that it’s how she chose to open her latest book: The New Kosher.“Perhaps if I could cook all my meals holed up in a rustic rural kitchen that overlooks beautiful mountains, a crackling fire in the fireplace, and John Legend blasting in the background, I would always love cooking,” she writes. “But that’s not how my cooking happens, so I don’t love it all the time.”Instead, what she loves most of all is sitting around the table with her family and friends, enjoying together the food she has created. “At my house we eat as a family – family style. The spills and stains on my tablecloths prove it.”What follows is a beautiful tome full of original and mostly simple takes on family-friendly dishes. From caramelized onion, fennel and mushroom soup to arctic char with wasabi-mirin sauce over rice noodles, lime and sesame-soy chicken and peach and raspberry whole-wheat crostata, Kushner presents dishes that are unconventional without being overly adventurous for a wide variety of audiences.“My concept was to put in recipes that are original and different and not usual to kosher cooking,” Kushner told The Jerusalem Post. “But I didn’t create the recipes for the book – the recipes already existed – which is why I was able to create the book quickly, because these recipes are ones that I cook all the time. They’re tried and true.”The mother of three from New York says the “new” kosher she refers to in the book’s title is a reference to moving away from traditionally heavy, Ashkenazi Jewish food, while still working within the kosher guidelines.“When people think of kosher food, they think more of Jewish food, the eastern European traditional dishes,” she says. “Those really are Jewish deli foods, but they’re not foods I grew up eating, and people in Israel aren’t for the most part eating.“But there’s a kosher Jewish cuisine that comes from all parts of the world – there’s Iraqi Jewish cuisine, there’s Yemenite Jewish cuisine, there’s Moroccan Jewish cuisine.”Working as a cooking instructor in New York, Kushner encountered people who were shocked to find out that the dish they had just cooked was kosher.“That is actually how this idea came to be, that people would say to me: ‘I would never think this was kosher food. It’s food that I could eat at any restaurant or at anybody’s house,’ and that’s what really struck a chord with me.”While she didn’t see kosher food as necessarily having a bad rap, it also didn’t have particularly positive connotations.“People will not equate kosher with fresh, seasonal, delicious flavors,” she says. “People equate kosher with pastrami and knishes.”TO THAT end, The New Kosher is brimming with bold flavors – from asparagus and goat cheese quiche to yam and chickpea puree with crispy sage; mini meatballs in cinnamon-tomato sauce; and red and white quinoa with mango and soy-peanut sauce. Unfortunately, many of the recipes – especially those for chicken and beef – include the instruction to “serve right away,” which limits those looking to cook for Shabbat and holidays.Her departure from traditional fare is not a groundbreaking one in kosher cookbooks – Helen Nash, Susie Fishbein and Ronnie Fein among others have taken a similar tack – but Kushner addresses the concept with grace and flair.She steers almost entirely clear of traditional Ashkenazi Jewish fare, and the few recipes she does include get her own updated twist. A hamentashen recipe has three fillings: rocky road; cookies and cream; and Ferrero Rocher. Her chicken soup is augmented with yams and fennel, and her halla has a choice of three toppings: sweet crumb; spicy maple crumb; and za’atar.“What I wanted to try to do was to show people that [kosher] is not what you typically think. Just because the recipe comes from a kosher book doesn’t mean that it’s going to be something that involves deli-style food,” she says. “There’s so much more to it than that.”Kushner’s love of cooking is genetic. “My mom is an amazing cook and she’s always cooking. Her life revolves around cooking,” she says. “So I definitely got that from her.”In fact, her family spends most of the holidays with her parents in Montreal, where her mother does the bulk of the cooking, though “everybody sort of brings their own little something.”And Kushner would be happy to pass her culinary prowess onto the next generation as well.Her children – Milan, nine, Emanuel, seven, and Rafaela, three – “love helping me in the kitchen,” she says. “My youngest one, I’ll just give her dough and she plays with it for hours.” Her oldest is already cooking his own eggs – with a little supervision, she says.“I think it’s really good for kids because it’s one of the few experiences in life that’s instantaneous,” she says. “They work on something and then the result is there after 10 minutes, 20 minutes – an hour at most.It’s very gratifying.”  Cucumber and Corn Salad with Poppy and Pomegranate This is a major crowd pleaser and super easy salad. It always amazed me how both kids and adults go crazy for it. Serve over basmati rice, and you’re good to go! 4 kirby cucumbers, unpeeled
1 cup corn kernels (use fresh or canned)
1/4 cup pomegranate seeds
1 Tbsp. poppy seeds
3 Tbsp. rice wine vinegar
1 Tbsp. extra virgin olive oil
1/4 tsp. toasted sesame oil
1/2 tsp. sugar pinch of kosher salt pinch of black pepper Slice the cucumber into thin rounds and place in a bowl. Add the pomegranate, corn, and poppy seeds. In a small jar, shake together the vinegar, oils, sugar, salt and pepper. Pour the marinade over the cucumbers and toss well.Tamari Salmon with Edamame
Serves 4–6

When friends are coming over for dinner, this is the recipe they often request. It’s easy to make: simply cook the salmon at a high temperature, pour the garlic- tamari sauce over the fillet, and sprinkle the crunchy, bright edamame on top. My kids fight for the edamame smothered in the zesty sauce. Tamari is traditionally a by-product of miso production and, unlike soy sauce, contains little or no wheat. It is also darker, thicker, and less salty than soy sauce. You’ll find it in most supermarkets.1 skinless salmon fillet, about 1 kg.
Kosher salt and freshly ground pepper
2 cloves garlic, minced
1/2 cup (125 ml.) tamari sauce
Juice of 1/2 orange
3 Tbsp. pure raw honey
1/2 tsp. toasted sesame oil
3 Tbsp. sesame seeds
11/2 cups
(235 gr.) frozen shelled edamame, thawed and brought to room temperature Preheat the oven to 230°. Line a baking sheet with parchment paper.Place the salmon on the prepared baking sheet and season lightly with salt and pepper. Cover the pan with aluminum foil, place in the oven, and cook until the flesh flakes when prodded with a knife but is still moist or to your liking, 10 to 15 minutes.Remove from the oven, uncover, let cool for 15 minutes, and then transfer to a serving platter.Meanwhile, in a glass jar, combine the garlic, tamari, orange juice, honey and sesame oil and shake until well blended. Rinse the edamame under running warm water.Pour the sauce over the cooled fish and sprinkle the edamame and sesame seeds evenly over the top. Serve right away. (That’s right, the edamame don’t need to be cooked. They were cooked before they were packaged and need only to be thawed.)