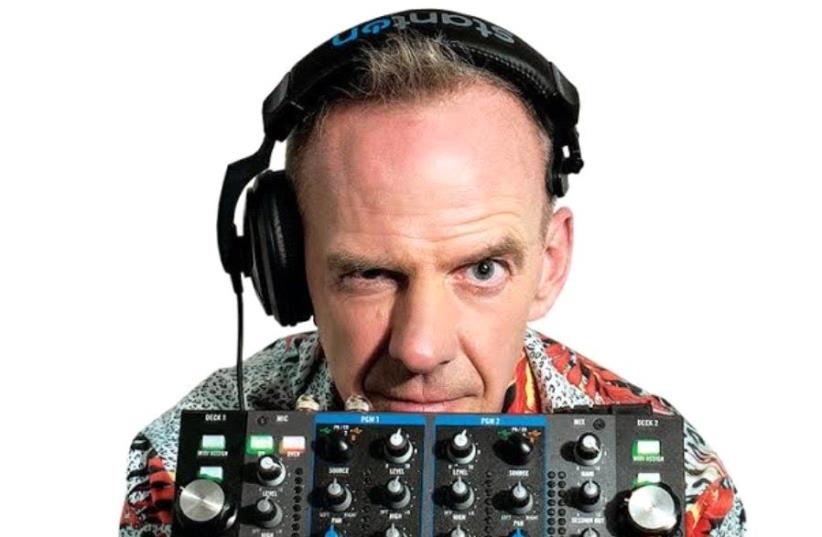 Norman Cook, aka Fatboy Slim
(photo credit: PR)
Advertisement
Sometimes it’s all in a name. Norman Cook may not look so great up on a marquee, but Fatboy Slim certainly does.Since the English DJ, producer/mixer/musician adopted the portly stage name in 1996, he’s gone on to win 10 MTV Video Music Awards and two Brit Awards and help popularize the beat genre, which still sounds fresh today.Cook first rose to fame in the 1980s as the bassist of the much-touted indie rock band The Housemartins, who scored a UK number-one single with their a cappella cover of Isley-Jasper-Isley’s “Caravan of Love.” Following stints in a number of other groups, Fatboy Slim was born and Cook has never looked back.Despite performing internationally from Ibiza to the Great Wall of China and generating worldwide hits like “Praise You,” “Rockafeller Skank” and “Weapon of Choice,” he’s never made it to Israel. That will change he makes his local debut over Purim at the Tel Aviv Port’s Hanger 11 on Sunday, March 12. “I don’t know why I never made it to Israel before,” he told The Jerusalem Post. “There definitely wasn’t a political reason for it, I guess the timing is just finally right.”“Israel checks all of the factors I consider when choosing to play shows: first time at a location, fun, food, finances... except favor to a friend,” he said. “Although, my agent and my lawyer are both Jewish, and they’re really excited that I’m finally going. They’re going to fly in for the show and take me around a little, too.”While there was no political motive behind Cook’s decision, people did warn him when he took the gig that he might face “some level of cultural boycott.” But he said he hasn’t heard anything negative so far.“I don’t read Twitter, so if it’s coming from that direction, I haven’t heard it. I’m picking up the vibe much more that people are happy I’m finally coming. My friends, everyone seems excited.”Politics, however, is difficult to extricate from culture. When Cook first entered the music scene, what we now know as “dance music” was referred to in the UK as “black music.”“Being a suburban white kid, I felt my role in life was to be in a suburban white pop group,” he once told DMC magazine. “Because before the invention of the drum machine, white people making black music, to me always felt a bit wrong... I just felt that my kind of heritage meant that I should be in a white pop band.”Cook eventually transitioned over to DJing full time though, and made the music he really wanted to.As for how he feels on the topic today, “I think of all the walks of life, that music is one of the most racially integrated of all of them,” Cook told the Post. “I think that music has always been color blind, and that’s probably one of the things I love most about it. People like [US President] Donald Trump and Brexit won’t change that.”“One of my favorite things is when you catch racist people dancing and they don’t realize it’s to a black artist,” he continued. “It tickles me. It’s like if Bruce Springsteen ever bumped into Donald Trump and explained to him what ‘Born in the USA’ is really about. I’d love to listen in on that conversation.”Cook maintained the heart of DJing has been consistent even as all else about the industry has shifted.“The mechanics of DJing have changed so much over the last few years,” he said. “The only thing that’s constant is taking young people who want to escape from their everyday lives and enter this hedonistic, euphoric place. We as DJs provide the soundtrack for that. It’s not about your ego, it’s not about playing the coolest tunes, it’s about taking them to that place.”“I try to keep [music] fun rather than work,” he said. “That’s what keeps it fresh... it’s fun exploration. I would get bored or the audience would if I did the same thing over and over again. If there is a challenge, it’s longevity – you’ve got to keep moving so you’re always doing something interesting.”The latest change has been a rather secret film project.“I can’t discuss too much, I’m a terrible tease,” he said. “I will say it’s a soundtrack for a whole film, and I’m very excited about it, with a director I’ve respected and admired for a long time. I’m still in the initial, fun research part of the process.”For all his talk of musical identity, it seems fitting that his Israel debut will come on Purim. He left it mysterious as to whether or not he will dress up, but his music certainly plays on the Purim themes of internal versus external identities, heart and purpose versus appearances.“Hearing Marc McClarron’s ‘Duck Rock’ for the first time really influenced me,” he said. “It’s interesting because he draws from a huge range of sources and still he’s a white guy in the middle of it. That inspired me, in the same way that punk rock inspired me to join a band even though I wasn’t a terribly talented musician. It’s not about the music, it’s about ideas and breaking cultural and musical boundaries. I still try to incorporate that into what I do.”