The Tikva Theater of Berlin presents ‘Cursed Is the Heart.’ 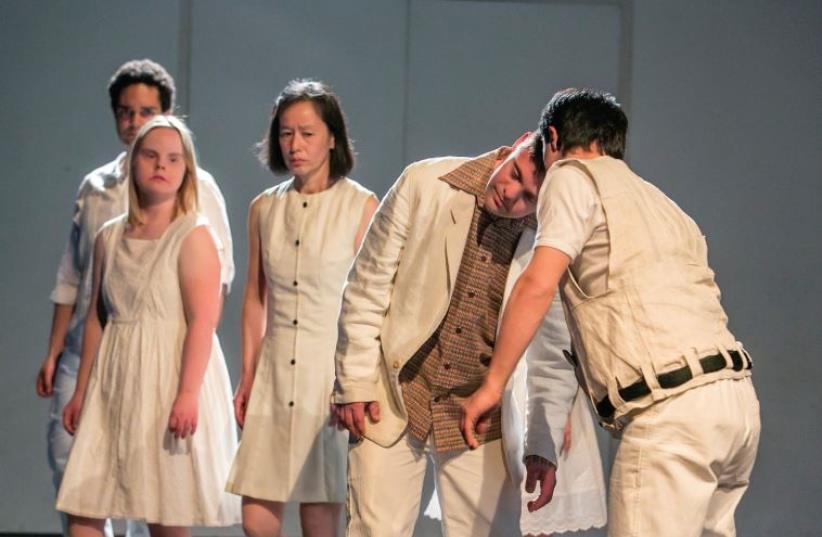 The Tikva Theater of Berlin's ‘Cursed Is the Heart’
(photo credit: DAVID BALTZAR)
Advertisement
Gerd Hartmann is not one for the niceties of political correctness, but he is clearly not out to put anyone’s nose out of joint. Hartmann is the artistic director of the Tikva Theater of Berlin, which is here to perform Verflucht Das Herz (Cursed Is the Heart) at the Mediatheque in Holon on May 31 (8 p.m.) and June 1 (2 p.m.).The show forms part of the junior program of this year’s Israel Festival, which takes in two months of children-oriented events, shows and performances from May 28 to July 30. The Holon center’s Israel Festival offerings also take in the third annual Mediatheque Conference, called Unbound on Stage. The Tikva Theater production fits into the unfettered ethos of the umbrella event, as some of the cast members are physically or mentally challenged.Hartmann made his Tikva directorial debut in 1993. The artistic director says Tikva is not about conveying specific messages about being physically or intellectually challenged.“We don’t talk disability; we only talk about ability. It’s a mixedabled company, and everybody contributes his or her own talents.That’s the important point, and that’s also the important message.It’s not important whether one or two or five or six of the performers are disabled. I don’t like terms like ‘mentally challenged’ and so on, all this political correctness. I use terms which in English-speaking countries are not so popular, so pardon me,” he says. “In our Holon show there will be 6 actors of the workshop, one japanese dancer and me. The age range of the Thikwaperformers is from 24 to 38.” he adds.Verflucht Das Herz is a 60-minute multidisciplinary production which culls from dance, acting and performance art, with the addition of a video installation and screened closeups of various parts of the performers’ anatomies. The textual substratum comes from 12 of William Shakespeare’s 154 sonnets. That sounds like pretty demanding base material for anyone, let alone performers with intellectual special needs.“The idea for the sonnets emerged a few years ago when we did A Midsummer Night’s Dream, Hartmann explains. “At Tikva, we normally don’t do written plays or classic plays. We do dance performances, and we work with texts that we develop ourselves.”The initial Shakespearean foray presented the company with a pretty steep artistic hill to navigate.“For a lot of our actors, it is quite difficult to remember texts or they are not able to learn texts by heart, especially ones that are as difficult as Shakespeare’s,” he says.Even so, that minefield was successfully negotiated and, several years on, led to the current project.“What we saw when we did A Midsummer Night’s Dream was that the actors were very eager to get the meaning of these difficult texts and to learn it by heart,” he says.Duly encouraged, Hartmann decided to opt for some of the Bard’s shorter works, but not just for brevity’s sake.“This is a performance on a lot of the subjects that are in Shakespeare’s sonnets,” he notes, “such as love, desire, loneliness, being abandoned, getting older. We try to find an approach for everyone who is in this performance, so as an audience you see special approaches to the different subjects,” he explains.Hartmann is quick to point out that all the members of the company and the performers deliver the goods.“Our work is not disability; it is about special ability. Watching one of our shows is not like doing social work for an hour and a half. It is about enjoying a good performance by performers who can reach the audience in a very special way. We’re talking about a work of art. That is the main thing,” he stresses.Then again, members of the audience will discern the differences in the appearance of the performers and presumably will note that some are seemingly more challenged.Hartmann is aware of the fact that his spectators will insert a subtext to the onstage proceedings.“Of course we read something into it. Especially an audience that is not used to this kind of art will, at the first moment, ask themselves who is disabled and who is not. But I think that after a few minutes – and a lot of spectators have told me this – they will say, ‘OK, that doesn’t matter; what matters is what I’m seeing here. And this is something special.’” Ten of the sonnets will be played from recordings, with the other two spoken by the performers. The sonnets will be read in the German translation, with Hebrew surtitles provided. But Hartmann feels that the textual content is not crux of the work.“The language isn’t that important. You will catch a lot of the atmosphere, even if you don’t understand German or Hebrew,” he says.The performance, which Hartmann says is suitable for teenagers, will be accompanied by images shown on two video screens.The visual add-ons include a video installation interspersed with details of the actors’ physiques.“What is love?” Hartmann poses. “When you love someone, you can love different parts of them – maybe their eyes or their fingers. The parts of the body don’t have to be so-called beautiful. What is a freckle, for example? Maybe you think it is pretty, while others think it is ugly. Things change when you are in love.”The show is underscored by electronic music from the 1960s. As Shakespeare noted in Twelfth Night, “If music be the food of love, play on.”

For tickets and more information: (03) 502-1552; http://www.mediatheque.org.il
Advertisement
Subscribe for our daily newsletter