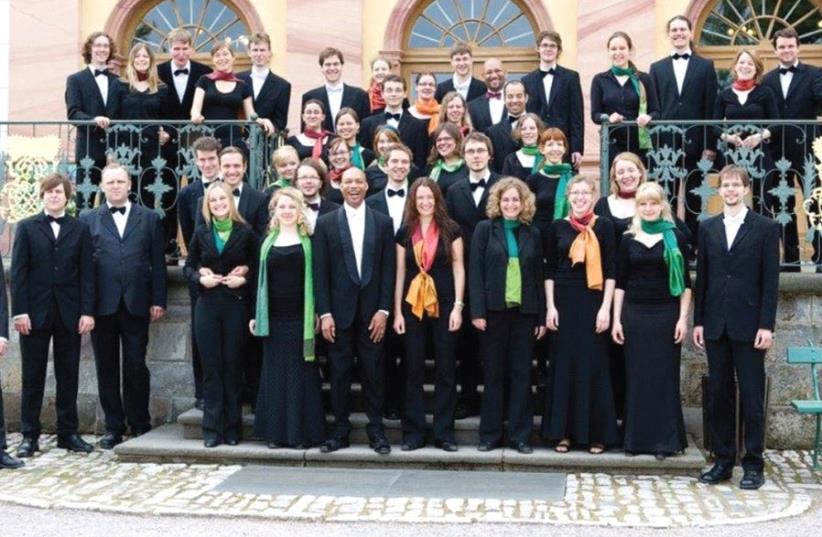 FRANZ LISZT University Choir of Weimar
(photo credit: GUIDO WERNER)
Advertisement
The Book of Psalms, the Bible’s most poetic part and therefore a source of inspiration for countless works throughout the ages, was the common denominator of the pieces in the Israel Festival’s concert last week.For diversity’s sake, traditional Persian, Moroccan and Sephardic liturgical chants (piyyutim) were inserted among works by 20th-century Israeli composers – Paul Ben-Haim and Tsvi Avni, in celebration of his 90th birthday – and international ones, such as Igor Stravinsky and Leonard Bernstein.The chants were performed by Mai Israeli Leshman and Ofer Callaf, with an orchestral arrangement.They evoked an appetite for a pure, authentic rendition, without a diluting orchestral arrangement that overshadowed the melodies part of the time.Stravinsky’s Symphony of Psalms and Bernstein’s Chichester Psalms were an ambitious undertaking for a students’ orchestra such as the Mendi Rodan Orchestra with the Jerusalem Symphony Orchestra, and student choirs such as the Jerusalem Academy Choir and the Franz Liszt University Choir of Weimar. Nevertheless, they sounded not only well-rehearsed and accurate, but also enthusiastic, excited and exciting.Stanley Sperber and Eitan Globerson took turns conducting the orchestras and choirs.