Film: More a farce than a satire

Facing down a nuclear Iran with laughs and falafel 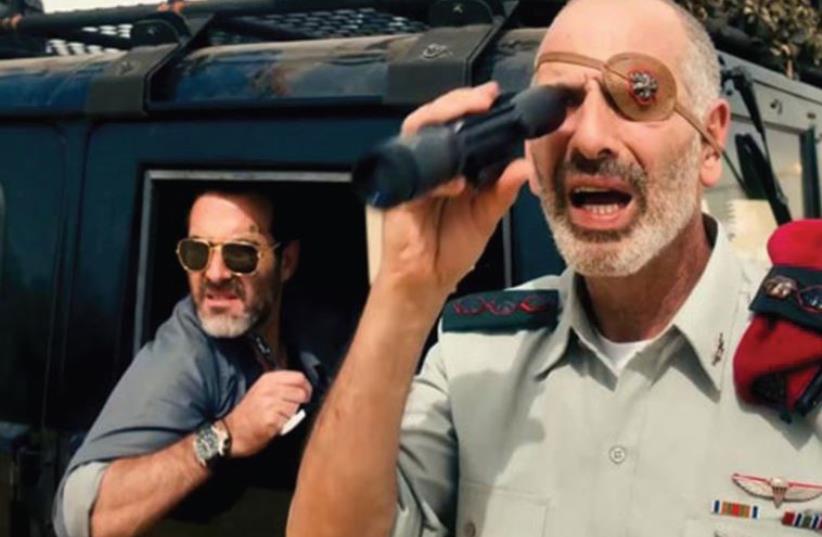 Atomic Falafel movie
(photo credit: PR)
Advertisement
Dror Shaul’s Atomic Falafel is a funny, enjoyable and slightly subversive comedy about the conflict between Israel and a nuclear Iran. It plays like a kind of Israeli Dr. Strangelove meets WarGames meets a sketch-comedy television show.The movie, which will doubtless offend many and provoke controversy, is about how two teenage girls, one Israeli and one Iranian, both of whom live in towns with a nuclear reactor, are able, with the aid of an Israeli hacker, to foil a nuclear war when top brass on both sides decide to push the button.Most of the action takes place in the Negev as Mimi (Mali Levi Gershon), a widow who believes her husband died of radiation sickness from working at the local nuclear plant, and Nofar (Michelle Treves), her daughter, sell food from their Atomic Falafel truck, to troops on maneuver in the area.Nofar’s boyfriend, Meron (Idan Carmeli), is a hacker who can get into any file with his program called the Kurdish Worm.Meanwhile, at the headquarters of the army base next to the nuclear plant, a group of buffoonish politicians (Shai Avivi, Yossi Marshek, Jonathan Cherchi and Zohar Shtrauss) and generals try to formulate the Israeli response when Iran attains nuclear capability in just a few days. Their solution: Israel must attack first, in 72 hours.As the clock counts down toward Armageddon, Nofar and Meron make contact with an Iranian teenage rapper (Tara Melter), who is angry at her father for moving the family out of Tehran to Nataz, a town next to a nuclear reactor that is a mirror image of Dimona. As the teens start to figure out what is going on, romance blossoms between Mimi and Oli (Alexander Fehling, the sexy German actor who starred in Labyrinth of Lies and Inglourious Basterds), a German international nuclear inspector who suffers from an allergy to uranium.If this sounds silly, that’s because it is. The movie gets laughs from its almost Quentin Tarantino-esque in-your-face energy and style, with a pulsing rock beat (and some surprisingly catchy Farsi rap) and characters introduced with title cards detailing their jobs and hobbies, as if they were on Facebook.Another touch that works particularly well are some scattered references to the Mordechai Vanunu nuclear scandal of the 1980s. A dog that annoys everyone on the base with its barking is named Vanunu. And there is a pointed gag with someone writing a message on her hand and pressing it up to a car window.Writer/director Dror Shaul, who made his mark in 2006 with Sweet Mud, a semi-autobiographical drama that won the Grand Jury Prize for World Cinema at the Sundance Film Festival, started his career making comedies. His 1999 movie Operation Grandma, about three brothers trying to bury their grandmother on her kibbutz, which the untranslatable catchphrase “Grandma Living is dead” (you have to hear it in Hebrew) became a cult hit. His next film, Sima Vaknin Witch, was also a broad, popular comedy.He tries to keep the obvious political message on the back burner here and focus on the laughs. Most of the scenes work, such as when the chief of staff tries to dupe Oli into thinking that the nuclear facility is a clothes factory, or the many scenes in which a young soldier from New Zealand, just arrived in Israel, is the only one on the base who understands the launch codes that his much older superiors are utterly clueless about.Occasionally, he overplays his hand with one joke too many about the defense officials and their over-the-top mannerisms. And none of these characters is as memorable Peter Sellers’s Dr. Strangelove or Sterling Hayden’s General Jack D. Ripper in Kubrick’s nuclear farce, which was what ultimately made that Dr.Strangelove more believable – it sparked all kinds of debates when it was released over whether a rogue general could actually start a nuclear war — and scarier.Atomic Falafel is more of a farce and less of a satire. Like its teen protagonists, it’s most interested in giving everyone a good laugh and just having some fun. If it can help save the world along the way, that’s a bonus.